An Open Letter to "Mr." Trump: WTF Is Wrong With You!? 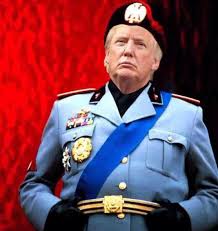 Dear Mr. Trump:
I refer to you as "Mr" because I do not recognize you as my president. Or anyone's president for that matter. You lost the popular vote by almost 3-million votes, more than any president in United States history. And with the likely help of Russian hacks, oppressive voter ID laws, other acts of voter suppression and election fraud, and an embarrassingly neutered media, you squeaked out a measly 306 electoral votes, placing you in the bottom fifth of all presidents ever.

But in true Trumpian fashion, you've boasted of a "massive landslide victory." Sorry, pal. The only "landslide" was Hillary Clinton's, as she received more votes than any president in history except for Barack Obama in 2008. One thing's for sure though: you were right about the election being "rigged." For you.

Now that we've gotten the niceties out of the way, let me ask the most obvious question: what the fuck is wrong with you!? Seriously, do you not give a shit about your legacy, if not for yourself, at least for your kids, grandkids and future generations of Trumps? If your goal is to beat James Buchanan as the worst president in history, well then Mazel Tov, as you're halfway there and you've still got five weeks till inauguration day!

Let's start with your cabinet picks. You were supposed to drain the swamp, not restock it with self-serving corporate billionaires and other uber-rich insiders and cronies. You've appointed a banana-republic-worthy gaggle of unqualified, inexperienced, intellectually un-curious sexists/misogynists, racists, stabbers (ok, just one knifer, Ben Carson), fake-news-spreaders and Russian sympathizers. And your alt-right white nationalist advisor Steve Bannon sits atop this basket of deplorables. This is your idea of populism!?

And what's with all the generals? You know, those guys you claim to be smarter than. Are you planning some kind of military coup? Besides, hanging around with generals doesn't make you any tougher. You could hang around real-men in uniform all you want and you're still a draft-dodging coward.

Now about that Russian hack. That you're summarily dismissing the validity of the findings of 17 national security agencies is shameful and treasonous. You should be saying, "Yes, a Russian hack into our election process, a cyber-attack, is a major threat to our Democracy and must be subject to a full bi-partisan investigation." Instead, you've disparaged our intelligence community. You blame President Obama. Or some 400-lb fat guy in his mother's basement. What kind of message does it send to our enemies that our President-elect attacks our national security experts while defending Vladimir Putin?

Next, the conflicts of interests are not just mind-numbingly unethical, but perhaps illegal and impeachable. You've refused to release your tax returns and have bailed on your big press conference this week to explain how you're going to separate yourself and your family from your business... leaving the American people with zero transparency for the first time in modern presidential history. Between your foreign investments and debt, and your domestic properties (DC hotel, for example), your conflicts are staggering. You're blatantly putting your personal financial interests before the safety and security of the nation. Oh, and because of you I now have to add the word "emoluments" to my vocabulary.

Lastly, your utter disdain for America's free and open press is perhaps the biggest threat to our democracy of all. Your administration's hinted at making drastic, unprecedented changes to the media's access to information including limiting or eliminating daily White House briefings, the Saturday morning presidential address, press conferences and the press pool. You've also threatened to expand our libel laws which would allow you greater ability to sue reporters and media outlets who are critical of you and your administration.

Your words and actions are a constant attack on our freedoms and the progress we've made in  our 240 year history. You've taken those tiny little hands, whipped out your micro-dick, and are pissing all over the Oval Office and the U.S. Constitution. Shame on you. And Shame on everyone who voted for you.

So no, Mr. Trump, I will never refer to you as "President." You are not worthy of that title.
Posted by The Ostroy Report at 8:02 AM

Yes!
What's the definition of "treason"?

GREAT article !!! Couldn't have said it better myself. You certainly hit the nail on the head. I wish more people would tell it like it is. Great writing !

You prefer a corrupt DNC, Cold War McCarthyism and a CIA which was "wrong" (lied...lied for Cheney)
to peace. Oh-and continued World Imperial Hegemony, can't share any of that with Russia.