Another Open Letter to "Mr." Trump: WTF's With All the Tweeting!? 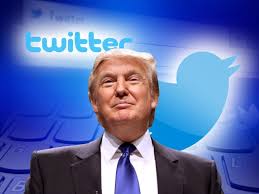 Full disclosure: I love your Tweets. I mean, I really, really love them. Please don't stop. In the sea of madness and sadness you've created by your victory I find them a delicious comedic oasis. And I actually think they're the paving on the road to impeachment. So don't listen to Kellyanne Conway or anyone else who's trying to silence your 140-character profundity. You're the boss, man, Tweet away!

But I have to ask yet again: what the fuck is wrong with you!? Hasn't Kellyanne told you you've won? That you don't have to keep fighting? That you don't have to keep counter-punching every puppy, child, woman, disabled person, beauty queen, Pope, or enemy-state every time your Kleenex-thin epidermis is punctured? You're like the worst, most vile internet troll, except you're not anonymous and you're about to become leader of the free world for fuck's sake!

I'm no psychologist, but your narcissistic personality disorder seems to be spiraling you into a pathological vortex of self-sabotage. You're an orange man-baby with digital diaper rash. Perhaps Melania can smear some Desitin all over your keypad. Alec Baldwin's impersonation of you, while genius, falls short of capturing your true essence. He should dress in a high school cheerleader's outfit, because you Tweet like a 16-year-old mean girl.

I'm embarrassed for you. Actually, I'm really embarrassed for your children and grandkids, because I suspect they're thinking, "Jeez, why does dad/grandpa have to be such a juvenile asshat who's likely to set America back 240 years and quite possibly destroy our world in the process?" And of course, this is a very disturbing contemplation for a bunch of nepo-phants who depend on your sexist, racist, self-serving, corrupt, Kleptocratic coattails for their very survival.

So what's with the Tweeting? Are you really this sensitive? Does your emotional world get so earthquakingly rocked every time someone, anyone, says something, anything, you don't like? Ya know what they say about a man with tiny hands: outsize sensitivity. I've seen 5-year-olds who handle criticism better than you.

And now your Tweeting is showing yet another YUGE insecurity, this one pertaining to the election. In the face of the findings of 17 U.S. national security agencies, your summary dismissal of a Russian hack has nothing to do with your creepy bromance with Vladimir Putin and everything to do with you desperately trying to defend the legitimacy of your victory. You got your ass handed to you by Hillary Clinton with a 3-million popular vote drubbing (the first major deficit of your administration), and you managed to snag a historically low 306 electoral votes with the likely help of election fraud, voter suppression and tampering by your BFF Vlad (in Trumpish this is referred to as a "massive landslide").

To be sure, something very fishy occurred in this election. We all know it, and you know it. You hit the big one alright, but you're forever a 'roided-up asterisk, just like Barry Bonds. And it's killing you. You hate the outcry that you didn't win fair and square. Unfortunately, you can legitimize yourself through Twitter rants. It only shows us just how threatened you really are by...the truth?
Posted by The Ostroy Report at 7:27 AM