The Media in the Trump Age: Why We Should be Terrified 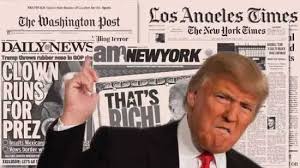 Get ready America, we're about to enter unchartered waters in our 241-year history. Instead of a democracy with a free and open press, the United States in 36 days is going to more resemble a propaganda-driven fascist dictatorship. Goodbye facts and reality. Hello 'post-truth' era.

While America won't have state-run television, radio and newspapers per se, the overall messaging will be controlled by the incoming administration of President-elect Donald J. Trump just the same. Trump and his Steve Bannon/KellyAnne Conway-led propaganda machine will twist, manipulate and conflate the truth so much like Kim Jong Un, Vladimir Putin and Baghdad Bob that it'll make your heads spin, believe me....believe me.

Forget the truth. That's so old-school. This is the Trump Age. The new administration will tell us what we want to hear or, more so, what it thinks we need to hear. No more, no less. And it won't matter whether the information will be rooted in reality or in Trump's alternate universe. Everything will be "great." Everything will be "successful." Everything will be the "biggest" and the "best." There will be no losses. No failures. No mistakes.

For the first time in U.S. history we will no longer be able to trust anything that comes out of the White House. Nothing. Not a single damn word. Oh how we'll long for the good old days of simple creative spin. Trump will be the most dishonest, disingenuous, duplicitous president ever. Our only hope for facts and the truth will be the media. But given how poorly the press did its job during the campaign in both vetting and challenging Trump and his endless lies, we should be gravely concerned.

In the Trump Age, fact-checkers are "liars." The media is "unbelievably dishonest." Journalists have been bullied and neutered. Trump's utter disdain for the media is palpable. It's a visceral hatred which stems in part by his confusion in thinking the Fourth Estate is merely an extension of his PR team. He lacks the respect and appreciation for a free and open press that is the bedrock of a democracy. Pathologically in perpetual search of acceptance and affirmation, Trump summarily rejects anything and anyone who fails to show him love. Challenge him, question him, show him no intrinsic loyalty and Trump the "counter-puncher" will pummel you. And therein explains his dysfunctional, hostile relationship with the press.

In Trump's administration the media will be mocked, excoriated and limited in its access to the White House and the president. It will be sued for libel. Trump, the master self-promoter, will be our primary source of information. It'll be Trump's truth and nothing else. He'll shield us from those pesky little reporters who conspire against him.

To be sure, the truth will be in scarce supply these next four years. A great example of that occurred Wednesday when Chuck Jones, president of United Steelworkers Local 1999, the union which represents workers at Indiana's Carrier plant, challenged Trump's claims about the much-hyped deal he made to save jobs from being outsourced to Mexico.

The result was a series of belligerent Tweets from Trump. Personal attacks about Jones' character and the performance of his union's workers. Courtesy of our first Twitter-Troll-in-Chief.

Consider for a second that we're about to inaugurate a president we cannot trust. Whose words mean nothing, whether he's speaking about the economy, foreign policy or military affairs. Imagine if when President Obama announced Osama bin Laden's killing we didn't believe it was true. Kind of like Trump's announcement this week that Japan's SoftBank will invest $50-billion in the U.S. and create 50,000 new jobs. No details. Just hype. And likely not true. That's our America in 36 days.

Trump hates the truth. Hates reality. Hates facts. He much prefers hyperbole and grandiosity. He's a self-aggrandizing showman. PT Barnum on steroids. But truth and facts matter. Especially in the Oval Office.

So will the media do its job in keeping the American public informed, countering Trump's propaganda machine? Will Congress serve in its oversight capacity and ensure our system of checks and balances, holding Trump accountable? Will voters demand the truth and punish Trump and Republicans if they don't get it?

Strap yourself in, because it's going to be a very, very bumpy ride...
Posted by The Ostroy Report at 7:59 AM

You are an idiot . Whether you like it or not he is your president. He won fair and square. For any a leftist idiot like youth does not like there are scores of other people who do. At this point your only option is to get out of the country. Won't be a loss to the country. Actually will be betterl.