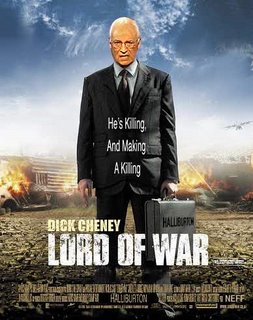 Stumping in Tampa, Fla. Friday for Republican state legislator Gus Bilirakis, whose seeking to win the 9th Congressional District seat being vacated by his 12-term father Mike Bilirakis, vice president Dick Cheney ratcheted up the Middle East rhetoric, citing the current crisis as another reason to keep Republicans in control of both the House and Senate.

"This conflict is a long way from over," Cheney warned at a fundraiser of over 200 party loyalists at Tampa's Wyndham Westshore hotel, which raked in over $230,000 for the GOP candidate. "It's going to be a battle that will last for a very long time. It's absolutely essential that we stay the course....If anyone thinks the conflict is over or soon to be over, all the have to do is look what's happening in the Middle East today." (This is the same Cheney who declared May 31, 2005: "The level of activity that we see today from a military standpoint, I think, will clearly decline. I think they're in the last throes, if you will, of the insurgency"). What's this...Cheney's a flip-flopper?

Clearly, the Bushevik fear-mongering is no longer now limited to its desperate attempt to justify the Iraq war and magnify the terrorist threat from al Qaeda. It's going to fully exploit for political purposes the escalating violence between Israel and Hezbollah just as it has the 9/11 attacks for the past five years. But what's going on in the Middle East right now has nothing to do with Bush's disaster in Iraq. While they constantly try to link that colossal military failure to the threat from al Qaeda, the reality is that there's no connection whatsoever. I'm not sure what's more despicable, this deception or how they're now trying to connect our mission in Iraq to that of the Israeli's fight against Hamas and Hezbollah.

"The central front of the war today is Iraq, and we can expect further acts of violence," Cheney said. "But progress has been steady." By the way, Dick, just where exactly is this "progress" again? Because it appears to me that the entire Middle East is imploding.

About the Bilirakis fundraiser, the Democratic challenger Phyllis Busansky, a former Hillsborough County commissioner, said, "I'm amazed that amid everything that's going on--increase in the violence in the Mideast, the skyrocketing oil prices--that the vice president has time to come to Tampa. I think this makes it perfectly clear that Gus Bilirakis stands firmly with Dick Cheney and his policies."
Posted by The Ostroy Report at 9:58 AM

It's hard to believe that they keep trotting Cheney out there on the stump. By noiw his tired, old dis-credited rhetoric must ring hollow to even the most ardent neo-cons.

I and others think that what's going on with Israel and Lebanon has everything to do with Bush's Iraq. I think Israel's assaualt on Lebanon was either pre-arranged or at least discussed with the Bush administration before it happened; and, at that time benefits for each side were recognized and conditions agreed upon. Cheney has started to collect on the benefits for the Republicans.

If I'd had the opportunity, I'd have joined Phyllis in the protest. The lies, greed, manipulation and war mongering - and the latest delivery of "precision" bombs direct from the USA to Israel - and worst of all, the constant fear and terror propaganda from the so called "culture of life" administration is most heinous. Mr. Cheney is a war criminal, from his carving up of Iraq in his secret energy policy meetings, to his CIA secret gulogs in Eastern Europe. Will the American people continue to believe a lie?
My head says, yes, of course we will. Fox is the news of choice. No one reads and civics lessons about the separation of powers have long been forgotten. Yes my heart cries from the Wilderness and says "NO! Do not believe. Mankind will not change without a spiritual revelation. May the g_d of Abraham have mercy on us all.

Cheney and Co. create a war which makes hugh profits for the rich. They give some of it back so Cheney can create more wars, and make them more profits.
Is this the sickest ponzi scheme of all time?

Muhammad is a murdering bastard!

Islam is a religion of War!!!

Cheney should be in prison awaiting execution for treason and war crimes. This would also eliminate the need to stump for political allies.

And as we know, Cheney is ALWAYS right, right? I mean, the guy in NEVER wrong on anything, right? I truly believe he is at least mildly retarded.

God Bless you for being a true patriot!

Which one are you folks?

Loyalist: Loyal to the Repub Party no matter what; puts political party before country

Patriot: The rest of us who put country before political party

I'm an independent who wants all Democrats and all Republicans thrown out of office.

Does that answer your question?

I don't believe either party is good for America. I'm betting you'll vote for Democrats 100% of the time. So, who is putting a political party before the country? I know I'm not.