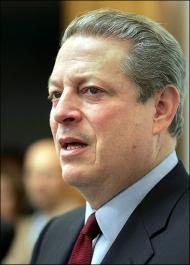 A brilliant idea came to me from my good friend and fellow Al Gore supporter Julie out in Los Angeles. Ask any Democrat whether or not they want former vice president Al Gore to run for president in 2008 and you'll get an emphatic 'yes.' Last week the organization DraftGore.com took a full page ad in the NY Times issuing an impassioned plea for The Goracle to enter the race, a subject I went on MSNBC's Hardball to discuss. Also that week Gore won the Nobel Peace Prize for his tireless, 30-year effort to address the growing threat from global warming. Can his resume get any more attractive? He is the most qualified individual in the Democratic Party, by far, and he should be president.

Well, it's time to take the "draft" movement one step further. It's time for each and every one of to take action. If you want Gore to run, SCREAM IT the best way you can. Put a large "Run Gore Run" sign(s) in your window. How great would it be for Al to see these signs everywhere he went, in every city, every town. An impassioned plea directly from the people themselves.

Display your signs as soon as possible. And forward this to all of your Democratic friends. And tell them to forward it to their friends. Let's get millions of homes across America to deliver the loudest, most personal message we can to the only candidate who can lead our great nation out of this domestic and international crisis.

And by the way...
To all those Republicans who mock Gore and discount the threat from global warming...if you can do me a favor and help us locate Autumn that would be great. Seems like Summer doesn't own a calendar. Almost November here in NYC and still pushing 80.
Posted by The Ostroy Report at 8:41 AM

Run Gore Run!
If Al Gore successfully runs for President of the Galaxy, he can really save us from Global Warming. That Bastard Clinton stole Autumn from Ostroy, the idiot.

We need a priority list of planets that Al gore must save from SUV driving inhabitants. He should save Earth first, because Andy Ostroy needs to find Autumn. Then Gore should save Mars, followed by Venus.

After saving all the planets from their current Global Warming threats, Al Gore needs to put a control dial on the Sun, so Global Warming never happens again.

Andy, no one other than you, would love Al to run then me. Everyone, except Hillary and the Republicans I think would welcome Al to throw his hat in. Then I wonder if I was in his shoes what would I do. Perhaps think that this would be the best chance to get this country back on it's feet and by being the leader of the country. Thinking, what the hell, I'll give it one more chance and run a campaign by telling the people they have one more chance to get it right. It would be their last chance to change the way this country is run and if they didn't want me (Al Gore) then the country would deserve just what they wanted, kind of like what they did in 2000 and 2004 electing Bush. Then I would think of the flip side and wonder why the hell I'd want to go through all of this crap again. The mess that Bush has made this country would be a huge job to correct and I would wonder even if it was possible at all. I would think that I'd have more influence being a citizen then beating heads. Al Gore is a loved person all over the world and maybe that will be his calling this time around.

Give Hillary 4 years and see what the world is like in 2012, he'll still be young to run, as long as the fire is still there.

Those that don't believe in climate change have their heads up their asses. Ask the people of Georgia, South Carolina and here in Florida about drought. Just look around and you see it, this is NOT a political thing it is a world wide fact, live with it because it's here to stay, I think we perhaps are already too late in fixing it.

I really think that you, Andy, and MoveOn have become to "folksy". We need more than holding meetings in our community as MoveOn suggests and signs in our windows. These are desperate times and marches, petitions, rallies, or whatever -- I don't claim to have any answers. I just know that Hillary will not be elected and Rudy will unless Gore runs. With Rudy there will be a third world war and with Hillary there will be more of the same wavering and lies we have now. It seems to me Gore is our only chance and we need to be passionately active. For starters there should be another petition so ALL of us get a chance to sign.

Andy, Gore is a piece of shit and the Global Warming issue being man-made is a TOTAL hoax. This is documented FACT that it originates from space. Gore winning the NPP is a JOKE!

They say Global warming is man-made so they can TAX US for it! There is NO WAY in hell we can do anything about global warming and THEY KNOW IT! They are laughing at us all that they have fooled most of you. They havent fooled ME!

It's too late now only because we have good candidates and he should have got in sooner if he were serious.

Let's concentrate on the candidates we have. Keep your eyes on the prize.

The Russian president says that he has "grandiose" military plans, including development of a new nuclear weapon. While chastising the US over its foreign policy, Putin managed to slip in his future goals of these nuclear weapons.

He says that the Iraq war in a "dead end" and called for a deadline for a troop withdrawal. He also says that Iraq was invaded for oil wealth.

Russia says that it will build another nuclear submarine, and it was also planning a "completely new atomic weapon." Putin calls the plans "grandiose" but assures that they are "absolutely realistic."

And don't worry, folks. Even though Putin will no longer be president in 2008, he has confirmed that he would campaign for the United Russia party in the parliamentary election. This way he can make sure that all of these plans become reality.

Why this saber rattling? Just thinking ... but could it be that Putin is trying to take advantage of the perceived weakness of America .. a weakness that may be the result of the Democrat's white-hot hatred of George Bush? We have a party, the MoveOn Democrat Party, that is more interested in destroying our president than it is in fighting the Islamic threat. Russia is poised to move into the vacuum created by this partisanship. Putin is no fool. He sees Russia as the world's number one military power. History will show that we have the MoveOn Democrats and the moonbat anti-war left to thank for much of this.

Well, whatshisname, at 12:53 is back again. But then who cares who he is and who cares what he spouts. We are all so tired of him, his kind, this administraiton and their cruel interest in war and killing. If only they could find some way to sublimate their primative urges. That "old time religion" hasn't helped much.

thank you Democrats, for trying with all your might to make America as weak as it can be.

Like the cavemen, the Democrats have learned that there is strength and power and victory in using the intellect. Brute force is passe in a world as complicated as ours. Have it the primitive way, and we'll all die in a nuclear war. Even if we're the strong country that drops the bombs, the pollution will quickly kill us. Wisdom is power. America was weakened when we reverted to adolescent behavior.

anonymous 9:20 am,
You show your ignorance with blanket statements. Claiming that "republicans don't believe in evolution" is like claiming that "democrats love murdering unborn children".

12:49 You are absolutely right. I agree that 9:20 should have siad "the religious right doesn't believe in evolution" (that's been documented) and; he should have said "Republicans don't evolve." which is obvious.

Imagine writing (or actually write one!) a letter that will be placed in a time capsule for your children or grandchildren to read in 50 years, telling them what you did to help alleviate global warming, or why you decided that no action was required. Then ask yourself: How will they feel about the decisions you made?

The "four levels of denial" for global warming:

Level 1: "The Earth is not warming up." (denying the data)

Level 3: "It's warming up, humans are causing it, but it's actually beneficial." (denying the consequences)

Level 4: "It's warming up, humans are causing it, it's harmful, but it's too expensive to solve." (denying responsibility)

Don't you think it's time to get out of denial mode and accept personal responsibility (familiar mantra of the right btw)?

anonymous 2:23 pm,
You obviously cannot explain the Global Warming of Mars and Venus. The problems with liberals is that they think about everything inside a vacuum. If you keep your face close enough to a sheet of paper, you will never see the margins.
Zoom out to a galactic/astronomical level and you will see that the time Humans have occupied the Earth is the length of a geological sneeze. The Sun has evolved and will continue to evolve until it burns out or explodes. "Global Warming" is mostly due to the Sun, which also explains why Mars and Venus are seeing the same thing, even though there are no SUV's nor Al Gore's carbon footprint on those planets.

9:05 The probelm with conservatives is that they make things up. THere is a huge community of scientists from which Gore has collected his factual argument for the cause of global warming Those scientists can be named, and have been, and can be read by anyone who accesses the information. What is the basis of your argument about the sun and where can I find that data to read? The days of trusting proclamations out of the mouths of Republicans without proof are over.