"Childrens Do Learn." Is this Our President or Ali G? 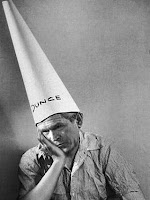 In an effort last week to prove that his No Child Left Behind education bill is working, President Bush, citing recently released improved math test scores, declared, "Childrens do learn when standards are high and results are measured"...thus finally answering his own 2001 question, "Is our children learning?

It's pretty sad when, by comparison, both Buckwheat and Ali G are the great communicators. Both have a better command of the English language than our grammatically-challenged president. Just when I think this colossal dunce cannot possibly embarrass us any more he offers up another of his legendary malapropisms.

"Yo, check it....me Laura and me does fink dat childrens need dem teachers to, like, stop chekin out their l'ittle behinds. Dats sick, you know? No childs left behind, or da right one for dat matter, aint nuffin to be messed wif. Booyakasha...."

http://www.apple.com/trailers/fox_searchlight/waitress/trailer/
Posted by The Ostroy Report at 10:51 PM

I have always felt there was too much damn book learning going on in this country but now that I have observed how a graduate of Yale and Harvard talks I realize we are not overdoing it at all!

As an American, I am embarrassed every time Bush opens his mouth. I can hardly listen to him anymore and usually have to read about his speeches online or in print.

If Bush doesn't prove that Americans should never vote for a person they would want to have a beer with as president, I don't know who does. Bush and the Republcans have destroyed our once great country. If a Republican wins the White House in 2008, I really wonder if we can survive.

Andy, I think you're being a bit too critical and are missing the point of Bush's speech. Our illustrious and infallible President is encouraging education and setting an example for all children to follow: get a good education so you won't sound like a doofus and embarrass yourself every time you open your mouth!

What really compounds his error is that even after he made such a gross mistake, he was not aware that he had made it. There are "slips of the tongue" which most people immediately correct. He apparently was unaware of his error. What is his problem? I am honestly confused. How could he have graduated from college?

"How could he have graduated from college?"