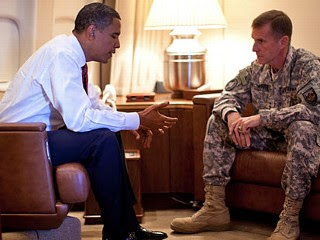 It's a funny thing, politics. For eight years Republicans didn't utter a peep as one general after another, including Gen. Eric Shinseki, Gen. George Casey and Gen. John Abizaid, were summarily replaced after offering criticism of former President George W. Bush's Iraq and Afghanistan war strategies. Others, like Gen. Anthony Zinni, voiced their opposition after leaving the job. Bush insisted he always "listened to the generals on the ground," but in the end he made his own decisions regardless of how much these top-ranking warriors disagreed with him. Which is why it's quite hypocritical for conservatives to now vilify President Obama for taking a few weeks to weigh the request of Gen. Stanley McChrystal, the top commander in Afghanistan, for 40,000 additional U.S. troops. Obama must listen to the generals! GOP puh-leeze.

Making the situation more complicated was the fact that McChrystal last week chose to publicly air his dirty laundry in an interview in London, suggesting that without more troops the war could be lost. McChrystal also said he had only spoken once with Obama over the last several months since taking over the region's top military post. To many, this was a breach of protocol for which he's since been harshly criticized.

Eugene Robinson put it quite succinctly in his Washington Post column last week: "How to proceed in Afghanistan will be among the most difficult and fateful decisions that President Obama ever makes. But he's the one who has to decide, not his generals. The men with the stars on their shoulders -- and I say this with enormous respect for their patriotism and service -- need to shut up and salute.Gen. Stanley McChrystal, the commander of U.S. and NATO forces in Afghanistan, is entitled to his opinion about the best way forward. But he has no business conducting a public campaign to build support for his preferred option..."

As to be expected, Republican leaders are using the Obama-McChrystal episode as an opportunity for fear-mongering. Sen. John McCain said ignoring McChrystal's request for 40,000 more troops would be "an error of historic proportions." I don't know about you, but I'm getting pretty tired of McCrusty wearing the Iraq surge on his chest like a $200 Armani tie.

But is that what we have in Iraq, where Republicans like to claim victory? Using North's criteria, have we really won anything? Without our troops there, Iraq will likely bloody itself in civil war, and the government will crumble, just as Vietnam proved to be a colossal waste of American money and lives. Are we to simply and rashly repeat these same mistakes in Afghanistan now just because some general wants more ass-kicking? Do we really want to be occupying these countries forever? War is like stock investing: you haven't won anything until you exit with a real, sustainable gain.

The debate over McChrystal's request is nothing more that pure partisan politics. Does listening to the generals mean Obama must do whatever commanders like McChrystal request? To the contrary, the president's job is to carefully weigh all options presented. Obama's delay is the right thing to do. Unlike his impulsive, obdurate, irresponsible predecessor, Obama is showing patience, earnestness and discipline when it comes to Afghanistan. Eight years, $700-billion and 4300 dead U.S. soldiers later we've seen the cost of Bush's rush to war in Iraq. A couple of months of analysis is not only prudent, it's to be applauded.


On another note, the film I produced, SERIOUS MOONLIGHT, which was written by my late wife Adrienne Shelly (WAITRESS), will have its U.S. premiere and afterparty December 3rd in NYC. This event will also serve as the 2009 Adrienne Shelly Foundation fundraising gala, and proceeds will go towards helping ASF achieve its mission of supporting women filmmakers. Tickets are $150. Please join me, our star Meg Ryan, our director Cheryl Hines and many others at this red-carpet event. Tickets are extremely limited. To purchase, please email ASFoundationOrg@aol.com or call 212-381-1716.

ASF is a 501 c 3 tax-exempt, non-profit organization which provides scholarships, grants, finishing funds, screenwriting fellowships and living stipends at NYU's Tisch School of the Arts/Kanbar Institute of Film; Columbia University; American Film Institute; Women in Film; IFP; the Nantucket Film Festival; the Tribeca Film Institute; and the Sundance Institute. Your generous contribution will go a long way towards helping us achieve this very important mission. Please click here to make a donation. Thank you.
Posted by The Ostroy Report at 7:30 PM

McChrystal should be fired, just like McArthur was. McChrystal is not in charge. He is not the commander in chief.

We need to get out of there asap.

McChrystal should be fired, but I doubt that Obama is a Harry Truman with the sense to do so. Obama spent no time in the military, and thus doesn't know when a general is operating out of ego satisfaction and not reality.

There is news that Obama has quietly authorized another 13,000 troops for Afghanistan - as if that is going to help much. It isn't going to keep the generals from feeling like Obama isn't on their side, and it's too much to keep the uproar from spreading among the anti-war groups.

Obama has got to stop splitting the difference every time he gets into something he truly doesn't understand. It's only going to hasten the functional end of his presidency. He's in deep with this health care "reform", the economy is getting away with him because he focused on insurance companies and banks and not their customers, and now he's duplicating his hero Abe Lincoln's excessive and naive trust in George McClellan as represented by a later set of West Point graduates. All of these things are beyond Obama's demonstrated capabilities - at least until he learns something about them (Lincoln did!).

I suggest - to return to the Kabulshit - that Obama read up on the defeat of one of the world's greatest military geniuses - Alexander the Great. If this man was unable to defeat the Afghans, what could make Obama think he could? There is only one logical conclusion Obama could derive from such a study:

We need to get out of there ASAP!