Republicans' 2010 Campaign Message: Vote For Us Because Obama Can't Magically Fix in a Year What it Took Us Eight Years to Destroy 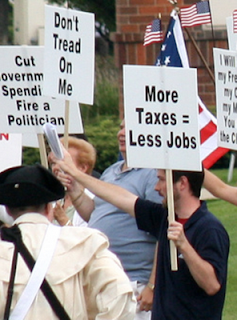 The NY Times writes Monday that the central campaign theme for the GOP next year will be jobs, jobs, jobs. But what Republicans won't be reminding voters during the midterm election cycle is how their party and president handed President Barack Obama the worst economy since the Great Depression. They also won't be presenting any charts showing the precipitous drop in job losses since the peak, nor will they discuss the steady downward trajectory of those losses from the 700,000 level to 500,000, then 400,000, and to the mid-200's, where we are today. Signs of progress, or economic recovery, won't be on the GOP menu.

To be sure, voters won't hear any mea culpa's from Republicans. Nothing about how sorry they are for decimating the U.S. economy with massive tax cuts for the wealthiest 1% of Americans, or for squandering a trillion dollars on the Iraq War. Or how the war in Afghanistan will likely require significantly more funding and continue sapping America's economy while racking up massive debt. You can be sure they won't talk about deregulation on Wall Street, the energy sector and the insurance industry, or how Bush pushed through trillions in government bailouts before he left office. And voters certainly won't be reminded that Republicans have largely controlled both houses of Congress since 1994 and the presidency since 2000.

Instead, the GOP is going to position the U.S. economy as if it began on January 20, 2009. As if up until that point it was nothing but surpluses and prosperity and good times in America. They will try to dumb-down reality and criticize the Obama administration as if all the pain and suffering voters are experiencing has been manufactured by the president and Democrats, while portraying themselves as white horse heroes ready to ride into Washington and rescue the nation.

Conservatives like to argue that 9-11 can't be blamed on Bush because he was only in office less than nine months when those attacks occurred. Yet after just nine months, Obama is being vilified for not being able to wave a magic wand and fix the colossal shitstorm that Bush & Company left for him on the White House steps.

So, what's the real 2010 Republican campaign message gonna be?: "Watch out Democrats, we're gonna be nastier, dirtier, more unethical and deceptive than ever. We're a bunch of frustrated, angry, frothing, tea-baggin' Town Hall bullies who will stop at nothing to regain power. You ain't seen nothing yet."


On another note, we could use your help at The The Adrienne Shelly Foundation. We're a 501 c 3 tax-exempt, non-profit organization dedicated in my late wife's honor, and with a simple mission: supporting women filmmakers. Adrienne, who wrote, directed and starred in the hit film WAITRESS, was killed November 1, 2006. Through the Foundation, her commitment to filmmaking lives on. We've established scholarships, grants, finishing funds, screenwriting fellowships and living stipends at NYU's Tisch School of the Arts/Kanbar Institute of Film; Columbia University; American Film Institute; Women in Film; IFP; the Nantucket Film Festival; the Tribeca Film Institute; and the Sundance Institute. Your generous contribution will go a long way towards helping us achieve this very important mission. Please click here to make a donation. Thank you.
Posted by The Ostroy Report at 7:07 AM

"
To be sure, voters won't hear any mea culpa's from Republicans. Nothing about how sorry they are for decimating the U.S. economy with massive tax cuts for the wealthiest 1% of Americans, or for squandering a trillion dollars on the Iraq War. Or how the war in Afghanistan will likely require significantly more funding and continue sapping America's economy while racking up massive debt. You can be sure they won't talk about deregulation on Wall Street, the energy sector and the insurance industry, or how Bush pushed through trillions in government bailouts before he left office. And voters certainly won't be reminded that Republicans have largely controlled both houses of Congress since 1994 and the presidency since 2000."

You're leaving out the fact that THE DEMOCRATS LET IT ALL HAPPEN!!

Democrats voted for all the above outrages, and receive the majority of their money from corporate sources.

the gop can use whatever tactic they want to....IT WON'T WORK ...becasue between now and november 2010....the party of no,will have to offer something besides sitting on their hands and saying no......the closer it gets to election time ,we will see alot of gop singing different tunes......voters are seeing thru that?....hold a hard line and then go soft.......why do you thing fox news never shows the gop's approval rating ? or bonhner's or mcconnell's? because it stinks ! james lewis north carolina

Terrorism as we know it today and the bank collapse(thus the economy collapse)were both precipated by inaction and enabling by Slick Willy.How about some truth...Just Gimme Some Truth...And I voted for him twice.However you slice it,OBAMA has no clue what he is doing-He has doubled the deficit inside of a year and has done nothing but campaign about issues he cant explain.If the Republicans want to win,both mid-term and 2012,all they have to do is sit back and watch OBAMA implode.You are biased in your views,but thats OK since it gives me a good laugh.You site the NY TIMES and affiliate yourself with the HufPo....Funny.
Not fair and balanced...BUT FUNNY !

Almost all politicians are dirty and underhanded...there is no patent on that by either the DEM or REP party.Bt either those on the left,ot those on the right.
But not all jounalists are as biased and full of shit like you are.
Then again-you ain't no journalist.

The SNL skit covering the lack of successes in Obama's term hits too close to home for comfort. Despite your premise, which I agree with, I think that the GOP is definitely going to score points with the voters with their campaign because of the (I'll be generous) delayed Obama job programs. Need and privation are both good dampers of intellectual activity, and when you add in a failure to deliver on promises (regardless of the reasons for this), the public becomes a very fertile field for future harvest by those seeking to reclaim power.

There is still time for Obama to reverse this, but he cannot dally! He has to get off his duff and start to PUSH! He's wasted far too much time courting "bipartisanship", time he needed for so many other things that America needs having done. If he doesn't produce an effective major relief effort in the form of jobs, he might as well begin planning his library, for he will do nothing once the GOP erodes his majority with the votes of the U6 sector of the economy.

We bloggers do still have a Plan B. We have to begin an active campaign to remind our readers about the GOP failures regarding job creation since the rise of Reagan. If we do our job correctly, we can abate the damage the GOP will do to Obama's agenda. I doubt we can prevent it completely.

I agree but only to a point. It isn't 8 years it is more like 30 years. That takes you back to the Reagan revulsion and the GOP's war on every American who isn't wealthy.

Be honest: Bush/Cheney have destroyed our country and Repub supporters like you are just hoping for Obama to fail.

When are folks like you going to accept that we the people support President Obama and the change he ran on? Your side acts like a bunch of sore losers.

Yes the Repubs have destroyed the middle class. They gave all the breaks to the rich and we are reaping what they have sown. The saddest thing is they sold a bunch of lies to the voters since Reagan and now they have finally woke up.

Why is it you on the left always conveniently leave out the fact that the economy under Bush didn't start to tank until the Democrats took control of the House and Senate? Just curious.

Andy, what you fail to realize or mention is the fact that Obama is just continuing the Bush plan. Geeesh, even Bill Maher told Michael Moore last week on Maher's show "There's not been a whole lot of difference in Obama than to Bush, did we just change the color?"----yes we did, that's ALL thats changed---unless youd care to tell your readers and myself where Obama is NOT like Bush. Care to tell us? Or will I be ignored and the comment not even posted?

John C....if I have to explain to you how Obama is not like Bush, then something's really wrong...

I wait in baited breath for your take on OBAMA winning the Nobel Peace prize.He gets sworn in on Jan 20 and the final votes must be turned in bt FEB 1,less than 2 weeks after he becomes President.
This is gonna get ugly.Something is up.

Nothing ugly will come out of it. Someone indeed nominated him in February. However the committee members discuss the nominations up to August. Pure discussions so far.
Only in October do they choose one candidate. And by then Obama had set an unprecedented process in motion. I belong to the ones who admire and respect this process as it is the blueprint for peace.
Others do not.
No problem.
So I do emphasize that they do not choose a candidate in February. The whole process is shown in the NOBEL PRIZE site