The Bombings in Iraq: Mission Definitely Not Accomplished 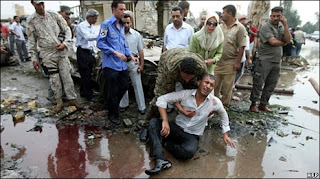 Two massive explosions, the deadliest in over a year, erupted in Baghdad Sunday, killing over 130 people and wounding 520 more. The suicide bombings, just under a minute apart, decimated two critical government buildings, underscoring the fragile state of Iraq's nascent democracy, and serving as a powerful reminder of the extremist militant forces which seek to undermine it as it prepares for its January election.

But, isn't the war over? Haven't we won? Hasn't the United States tasted the sweet nectar of victory? Haven't we successfully liberated the Iraqi people? Try telling that to the families of those whose bloodied body parts have been strewn about the streets of Baghdad these past two months, or to the millions who still feel like they're living in an unsecure, violent war zone. As George W. Bush exited office last January, his administration unilaterally declared "Mission Accomplished" yet again, apparently failing to learn its embarrassing lesson from 2003. Republicans to this day still talk of the Iraq war as if it's a successful footnote in America's military history.

Just as they started this war on smoke and mirrors, Republicans have been trying to end it. But make no mistake: Sunday's bombings, and those in August at the Foreign and Finance Ministries which killed 122, prove that there is no victory in Iraq any more than there were WMD and ties to al Qaeda. We're simply not there. America will be victorious when its troops can come home, and when the Iraqi government and security forces have demonstrated that it can protect its citizens and preserve its Democracy without being propped up by 130,000 U.S. forces. Yet as the continuing and escalating violence there demonstrates, the Iraqi's clearly have a long way to go. If U.S. troops were pulled tomorrow, Iraq's Democracy would crumble.

To be sure, to say President Obama is in an unenviable position would be a colossal understatement. He inherited two difficult wars in Iraq and Afghanistan, and is faced with critical strategic decisions about the future direction of both as well as what to do with the growing terrorist threat from Pakistan. There's no simple fixes. But it's time for Republicans to stop the "victory" propaganda. No one's buying it anymore, and it's an insult to every American and Iraqi who wants a true and lasting peace.


On another note, the film I produced, SERIOUS MOONLIGHT, which was written by my late wife Adrienne Shelly (WAITRESS), will have its U.S. premiere and afterparty December 3rd in NYC. This event will also serve as the 2009 Adrienne Shelly Foundation fundraising gala, and proceeds will go towards helping ASF achieve its mission of supporting women filmmakers. Tickets are $150. Please join me, our stars Meg Ryan and Timothy Hutton, our director Cheryl Hines and others at this red-carpet event. Tickets are extremely limited. To purchase, please email ASFoundationOrg@aol.com or call 212-381-1716.

ASF is a 501 c 3 tax-exempt, non-profit organization which provides scholarships, grants, finishing funds, screenwriting fellowships and living stipends at NYU's Tisch School of the Arts/Kanbar Institute of Film; Columbia University; American Film Institute; Women in Film; IFP; the Nantucket Film Festival; the Tribeca Film Institute; and the Sundance Institute. Your generous contribution will go a long way towards helping us achieve this very important mission. Please click here to make a donation. Thank you.
Posted by The Ostroy Report at 5:53 PM

As long as our military can operate outside of civilian control we will never have peace.

We can thank the well-meaning but naive Harry Truman for the condition the nation is now in. He was only the VP because as Senator he was so good at rooting out fraud and waste in our "defense" industry in the early stages of WWII. The owners of these industries pushed Truman on FDR to get him out of their hair, and then struck pay dirt when Roosevelt died. Truman - in over his head with the war effort despite it being clear that the end was near, relied upon his "friends" who had made him president to "advise" him on how to conduct the war, which would now have to be shifted to fight the Soviet menace once the fascists were defeated.

Truman never questioned these advisors, buying into their lies that the Soviets would roll over Europe when they were done with Hitler. The fact that they had little heavy industry to provide the necessary means to do so was lost on the former defense factory auditor. So when the advisors promoted the National Security Act of 1947 to Truman, he gave them the keys to the power house - and we've been paying for that mistake ever since. I doubt it's a coincidence that every war the US has fought has only produced more war, for what better way to generate obscene profits is there?

Now that the defense industry has been outsourced and offshored like most of the other American industries, there should be little incentive for the American worker paying the taxes to continue to blindly support the continued growth of the American military - which is already consuming a budget larger than the rest of the world's expenditures combined.

This humongous cancer on our economic well-being - which Obama today promised to increase despite being elected in part to reduce our participation in endless war - is going to destroy us by defensing us to death. The end is near! It's not like there are many jobs left to lose anymore! Look at how many ex-Boeing employees remain unemployed in Wichita, Kansas, for example. But thanks to the corporofascist media, most workers don't have any more of a clue than did Harry Truman upon taking over from FDR - and our advisors are no more honest and truthful than his were. We will continue to support war until there is nothing left of America to defend.

Maybe then we will finally understand what William T. Sherman meant about war being hell - we'll be living in it.

If you look at the stats, you will see that since Obama took office, things have gotten worse in Iraq, Pakistan (or should I say Pahkeestan), and Afghanistan.

This is primarily because people think that Obama is a quisling - a man without a spine and more importantly, a person who has absolutely no interest in foreign policy since his quest is to expand his domestic statist agenda.

They know that he can be rolled internationally and America's enemies are emboldened while our country's safety is endangered.

I guess we would have been better off if there was a chapter on Rules for Radicals in dealing with something other than lying to gain power and to expand the state's control over people's basic freedoms.