Joe Scarborough Shows Yet Again Why He Could Be President Someday 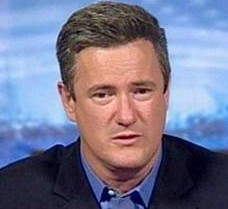 One month ago I wrote a piece about how MSNBC's "Morning Joe" host Joe Scarborough could very well be the GOP nominee for president in 2012 if he played his cards right. Well, Joe's hand was full of aces Friday as he penned "Thank You Mr. President," his penetrating, highly rational Huffington Post blog harshly criticizing both Democrats and Republicans for the partisan viciousness that's raging out of control in Washington, while at the same time praising President Obama for his attempt to bring the 2016 Olympics to Chicago. There should be no doubt left in anyone's mind that Scarborough is angling for the Oval Office chair. And he just might make me look like a genius if he keeps this up.

While right-wing talking heads lined up to attack Obama and cheer his and the nation's Olympic loss, Scarborough was downright effusive in his praise:"Count me as one conservative who is disappointed that President Obama's hometown will not be hosting the 2016 Olympic Games....The President was right to fly to Copenhagen to try to land the games, not for the sake of his city, but for the good of his country. The fact President Obama failed makes me respect him more for taking the chance, and the fact many right-wing figures opposed the President's mission shows just how narrow-minded partisanship makes us all."

Scarborough then went on to offer a scathing critique of the intense partisanship that's paralyzed lawmakers: "For the better part of 20 years, a bitterness has infected our politics that has weakened our country. We Republicans spent eight years trying to delegitimize Bill Clinton. Democrats spent the next eight years doing the same to George W. Bush. Now that a Democrat is in the Oval Office again, it is the GOP who is trying to delegitimize a sitting president."

"Fortunately, there are a growing number of Americans who believe we cannot continue going on this way," he continued..."Something has gone terribly wrong....Some of the rhetoric is dangerous. But what we saw from some conservative corners regarding the President's failed Olympics bid was just plain stupid.... Put me down as one conservative who is glad my president flew across the ocean to try to bring the 2016 Games to America."

Ya gotta hand it to Joe. Whether he's just posturing here or if he's genuinely as fed up with all the reprehensible partisan bickering as the rest of us, it truly doesn't matter. He wins regardless, just by showing tremendous objectivity and class when most Republicans these days are frothing at the mouth to take Obama down at every turn. He's showing a discipline and civility in a town that sorely needs it. Perhaps Scarborough might just be the guy to bring a different GOP tone to the next election, and help change the entire political landscape in the process. This is one Democrat who's certainly rooting for him to succeed.
Posted by The Ostroy Report at 7:11 PM

I agree wholeheartedly Andy. (As usual). Joe tends to be pretty decent in the way he disagrees. I like his show "Morning Joe" and I think Mika keeps him inline when he is not.

Make you look like a genius?Funny.I suppose he has a magic wand.
Listen,Pres Obama should NEVER have gone to Copenhagen.Never.I want this country to host the Olympics.But if we were awarded them,it would not have been because of Obama.And the fact we didnt get them,it isnt Obamas fault.Flying 2 jets,his wife,Oprah,et al,cost an additional $10 million dollars on top of the $100 million Chicago spent already.How about taking the energy and taking money and tryng to fight the murders and the crime in Chicago,particularly the black on black crime.Something Obama had no record of success of while a community organizer there.Chicago wanted the olympics before addressing their woes,much like New Orleans built a Superdome before repairing the levees.Will we ever stop putting the cart before the horse?

How many hours combined is the round trip that Pres Obama made to Copenhagen? Obama was able to 'squeeze in' a 25 minute meeting with General McChrystal on Air Force One before departing Copenhagen.Where oh where are his proprities.I am sorry-this Pres is ALL about himself and his own agenda.This is a war that Obama called 'the good war'.What a phony.He lied to all of us and we all bought it,hook,line and sinker.

Check out Joe's debate with Max Bluementhal on Huffington. Joe wants to make it all even by saying that left-wing democrats were just as nutso about Bush as right-wingers are about Obama. Here's why he's wrong: Bush was shit. And small gov Republicans like Joe have to take responsibility for bringing him into power.