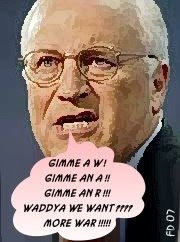 Former Vice President Dick "The Dick" Cheney is at it again, harshly criticizing President Obama for apparently taking more time than His Dickness would like to figure out whether or not to send more troops to Afghanistan:

"The White House must stop dithering while America’s armed forces are in danger," The Dick said Wednesday at black-tie awards ceremony at the conservative Center for Security Policy. "It’s time for President Obama to do what it takes to win a war he has repeatedly and rightly called a war of necessity....Make no mistake. Signals of indecision out of Washington hurt our allies and embolden our adversaries."

Of course, this irascible impatience is perfectly understandable given how reckless and irresponsible The Dick and his war-mongering sidekick George W. Bush were in sending 5200 U.S. troops to die in Iraq and Afghanistan. I guess when you're a couple of draft-dodging uber-chickenhawks, you loathe a U.S. president who actually thinks before he speaks, analyzes before he acts, takes war seriously and is firmly committed to using it as a last resort rather than as a masturbatory weapon-of-whimsy in the war against failed masculinity. What The Dick needs to understand and accept is that Obama doesn't need to kill U.S. troops in order to feel like a real man.


On another note, the film I produced, SERIOUS MOONLIGHT, which was written by my late wife Adrienne Shelly (WAITRESS), will have its U.S. premiere and afterparty December 3rd in NYC. This event will also serve as the 2009 Adrienne Shelly Foundation fundraising gala, and proceeds will go towards helping ASF achieve its mission of supporting women filmmakers. Tickets are $150. Please join me, our stars Meg Ryan and Timothy Hutton, our director Cheryl Hines and others at this red-carpet event. Tickets are extremely limited. To purchase, please email ASFoundationOrg@aol.com or call 212-381-1716.

ASF is a 501 c 3 tax-exempt, non-profit organization which provides scholarships, grants, finishing funds, screenwriting fellowships and living stipends at NYU's Tisch School of the Arts/Kanbar Institute of Film; Columbia University; American Film Institute; Women in Film; IFP; the Nantucket Film Festival; the Tribeca Film Institute; and the Sundance Institute. Your generous contribution will go a long way towards helping us achieve this very important mission. Please click here to make a donation. Thank you.
Posted by The Ostroy Report at 11:30 PM

After the massive arrests of alleged terrorists, Cheney had to find some other prediction to fabricate.

When his book gets closer to publication, he'll start whining about the dollar (yet, the dollar is actually HIGHER than it was recently under Bush/Cheney. But don't let that stop Glenn Beck, Rush Limbaugh, Sarah Palin etc... from screeching about it.)

Q: What do these people all have in common?

A: Making money off screeching about our Commander-in-Chief.

I could accept a deliberative process aimed at coming to the right decision in due course.

But what we have here is Obama being so obsessed with taking over large parts of our domestic economy and encroaching upon personal freedoms via taking over medical coverage that he is dead set against anything else taking front and center in the minds of Americans.

And nothing does that more than escalating a war.

This is a despicable thing to do to our brave men and women already in harms way and a disgraceful de-prioritizing of our national security.

Dick Cheney is one of those throwbacks to the cavemen whose only measure of value for man is how much he has killed or destroyed. I would love to see this cretin have to come back as a Gaza Palestinian under fire during Operation Cast Lead (I draw no distinction between who was right or wrong there in this comment), then have to be in Baghdad during Shock and Awe. Then maybe I'd ship him off to the Mekong Delta in 1968, then maybe to New Guinea during 1942, then maybe...

Endlessly on the receiving end of incoming fire! Now that would truly be Hell for a chickenhawk like Dick the Abuser. Let him wrestle with that!

Dick Cheney Wins the "Keeper of the Flames" OF HELL award!

All Dick Cheney is doing is trying to save himself.

To the poster above who thinks Obama is obsessed about making the decision. Bush/Cheney took 8 months to decide to send more troops. And they were war hawks.

Think about it! I'd rather Obama take his time and do the correct thing than what Bush/Cheney did.

You misread my point. What I am saying is that Obama is so obsessively focused upon his socialist, statist agenda that war is an unwelcome distraction, even when it is an urgency that ought not to be avoided.

Obama is becoming a throwback to the isolationists who fiddled while Europe and the Far East burned, only to singe our own shores and almost overwhelm our national security.

Socialism and statism is inherently inward looking. That's all this guy cares about, except for the limited exception of screwing Israel.