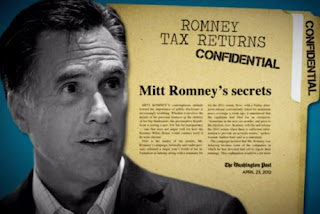 You've heard of "Birthers?" Those relentless, ubiquitous conspiracy zealots who insist that Barack Obama is not a natural born citizen and therefore not eligible to be president? Well, I'm a Taxer. I believe Mitt Romney, the presumptive Republican nominee for president, has failed to pay his fair share of taxes for the past ten years or more and I demand that he release his returns to prove otherwise. Just like Obama has had to show his birth certificate to prove he's as American as Michele Bachmann.

Romney has released just two years' tax returns in what we Taxers suspect is a deliberate attempt to conceal his dubious offshore and domestic investments which have provided him valuable tax havens, resulting in little or no taxes paid, especially as compared to the rates of average working Americans.

"That’s all that’s necessary for people to understand something about my finances,” he's said in his defense.

There's been much speculation over the amount of taxes Romney's paid, or hasn't paid, relating to, for example, Swiss bank account(s), Cayman Island investments, 401K, and gift taxes on transfers to a trust he set up for his sons in 1995 which is now valued at $100 million.

"When it comes to answering the legitimate questions the American people have about whether he avoided paying his fair share in taxes or why he opened a Swiss bank account, Romney has shut up," Reid said. "But as a presidential candidate, it's his obligation to put up, and release several years' worth of tax returns just like nominees of both parties have done for decades."

Speaking amid the safety of the Sean Hannity radio show, Romney refuted the charges:

"Well, it's time for Harry to put up or shut up. Harry's going to have to describe who it is he spoke with because of course, that's totally and completely wrong....It's untrue, dishonest, and inaccurate. It's wrong."

But even several prominent Republicans including Ed Rollins, George F. Will and Bill Kristol have said Romney needs to release more returns. So what exactly is Mitt hiding? Is he a flat-out tax cheat or simply paying embarrassingly low rates which would further cast him as a privileged elitist who's even more out-of-touch with the average voter than previously believed? What's really behind his unyielding refusal to release several more years of financial data, as every other presidential candidate in modern history has done except John McCain but including his own father George, who provided 12 years of tax returns? We Taxers demand to know the truth behind what appears to be a carefully orchestrated campaign of deception.

Posted by The Ostroy Report at 7:37 AM