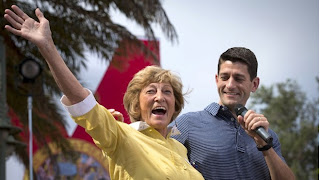 Paul Ryan was out on the stump Saturday defending his controversial plan to end Medicare as we know it. Speaking Saturday to supporters at The Villages, a sprawling retirement community in central Florida, Ryan presented his mother, Betty Douglas Ryan, on stage with him in an effort to convince the crowd that (a) he likes old people and (b) they somehow trust him on the Medicare issue.

“You learn a lot about life. Medicare was there for my family, for my grandma, when we needed it. And Medicare is there for my mom when she needs it now, and we have to keep that guarantee.”

The only problem with this sugary rhetoric is that it's patently untrue. Ryan and his presidential running mate Mitt Romney would gut the 47-year-old government health care program and send seniors packing for VoucherVille, where the subsidies for private coverage would trail inflation and result in an average additional cost to seniors of $6400 annually, according to the non-partisan Congressional Budget.

"Our solution to preserve, protect and save Medicare does not affect your benefits,” Ryan assuredly told the crowd. “It’s a promise that must be kept. But in order to make sure we can guarantee that promise … we must reform it for my generation.”

And of course, by preserve, protect, save and reform, Ryan and Romney really mean dismantle. You’ve got to hand it to Republicans. Only they could look seniors in the eye and promise to save Medicare as they’re drafting plans to destroy it.

It’s outrageous how the GOP ticket is portraying itself as the great protector of Medicare while painting Obama and Democrats as the ones cutting it. If the administration doesn’t squarely get in front of this debate and define Romney and Ryan as the Medicare Killers they are they just might succeed with this propaganda, just as Bush and Cheney, the AWOL and Deferment Twins, successfully convinced voters that they were the great warriors while the Vietnam hero with the five medals, John Kerry, was weak and incapable of defending America.

THE dems have to hammer this subject.