Republicans Taking a Cue From the Great Richard Pryor? 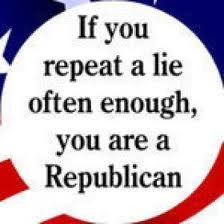 It's one of Richard Pryor's best bits: a woman catches her man and another woman having sex. In a moment of supreme male arrogance he says "Are you gonna believe me or your lyin' eyes!?" Welcome to the 2012 Republican campaign strategy.

This is the year of unprecedented GOP hypocrisy, distortion, deception, dishonesty and lies. And it's all about what they say not what they actually do:

-They claim Obamacare is "socialism" and a "government takeover" of health care, yet it puts 30-million new policies in the hands of private insurance companies

-They claim to be patriots concerned with national security and then shamefully Swift Boat Obama over Osama bin Laden's killing, saying he had nothing to do with it (remember John Kerry's "fake" medals?)

-They promise to protect, preserve and save Medicare as they plot to destroy it

-They claim to be "for women" yet consistently legislate against them and show them nothing but contempt through their views on workplace equality, abortion, contraception and rape

-They say they champion minorities, yet have conspired, with the help of the courts, to enact Draconian voter ID laws to disenfranchise them and prevent them from voting

-They claim to be deficit hawks yet support the Ryan budget which adds roughly $1.5 trillion annually

Hypocrisy. Distortion. Deception. Dishonesty. Lies. Should be the Romney/Ryan bumper-sticker.
Posted by The Ostroy Report at 8:18 AM