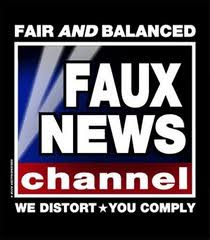 Why does Fox News even bother to portray itself as anything but the overtly biased right-wing propaganda machine it is? The self-proclaimed "Fair and Balanced" network is so in the tank for Republicans it's laughable. Oh, they strike a fair balance alright, and it lies somewhere between batshit crazy Bachmannia and heartless, detached Romney Hood.

The Faux News Network wouldn't know objectivity if it smacked it in the Hannity. And in a hotly contested presidential election year, it's been offering up campaign drivel so slanted that it seems written by RNC head Reince Priebus himself.

Margolin, allowed unchallenged to assert unsubstantiated nonsense as fact, claimed the liberal excitement over Obama four years ago has disappeared and that Democrats are resorting to contests, blanket give-aways and other desperate means to ensure a full house. When asked by Varney to describe "the type" of sources he's quoting, Margolin unconvincingly said "high-ranking campaign officials, top convention people." So what we have here is this: some no-name hack for the Murdoch-owned Post (which also owns Fox) makes public an unsupported claim and then immediately provides the convenient explanation for when his manufactured non-story will ultimately be proven unfounded.

And in a brilliantly comical segue to the next story about a controversial new Priorities USA Action super-pac ad attacking Romney and Bain Capital, Varney rhetorically asked: "Has the campaign stooped to a new low? We turn to key political strategist Karl Rove...." I guess when seeking insight on "stooping to new lows" what better expert is there than the man his former boss, George W. Bush, appropriately nicknamed "Turd Blossom."

Posted by The Ostroy Report at 8:03 AM

Wait until their viewers realize they voted to destroy Social Security and Medicare. Let's hope they don't win or millions of Americans will be kicked to the curb.

Propagandists' paradise, the good old USA. How do we stop this cancer? It is so well funded, that it appears unstoppable. Even the Limbaugh takedown only demonstrates there is a limit to the lack of decorum, not a limit on premeditated lying and systematic mind control.