Romney: It's Not My Platform...Those Guys are NUTS!

So here we have the presumptive Republican nominee Mitt Romney, on the eve of the GOP convention, distancing himself from his party's oppressive platform, which includes outlawing abortion in all cases including rape, incest and the health of the mother. Welcome to "Personhood"...that is, of course, if the person in question is a rapist or a sexually abusive relative. No wonder Romney wants to run from this insanity. 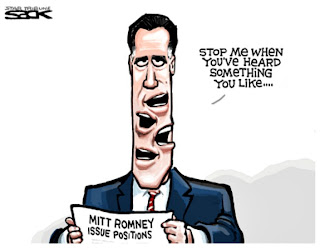 But wait...didn't he put Rep. Paul Ryan on the ticket with him? The same Paul Ryan whose own extremist reproductive positions mirror those of his party's platform? The same Paul Ryan who's co-sponsored two repressive, regressive rape and abortion bills with the party's newest goat, Rep. Todd "Super-Rape-Sperm-Repelling-Vagina" Akin? Yes, that Todd Akin... the one who believes a rape-baby is a "blessing" from God? The same Todd Akin who thinks there should be "some punishment" for rapists?

And isn't Romney the same guy who went from being pro-choice during his stint as governor of lefty Massachusetts to being the staunch anti-abortion guy who seeks to de-fund Planned Parenthood? The same Romney whose homoerotic bromance with Ryan is making Marcus Bachmann downright giddy?

It's all so confusing, like Six Degrees of Kevin Bacon but without Kevin Bacon and only needing two degrees to tie Mitt back to the legitimate-rape-and-abortion-obsessed radicals.

But here's the kicker: on the MSNBC Sunday program "Up with Chris Hayes," Romney policy advisor Avik Roy went even further in the distancing game by answering "very little" when Hayes asked how much currency the Tea Party radicals, whose influence on the platform is clear, will have in a Romney administration. Did you hear that Tea Partiers?!
Posted by The Ostroy Report at 2:19 PM

Around the table at the local diner, the Public is convinced that the President is the anti-Christ. They'll even accept someone like a Romney/Ryan, someone they know is against their well-being, because their fear/hatred for the President is so great.

Logic and reason have no place here.