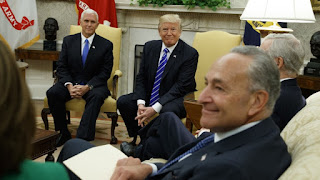 The conventional wisdom in presidential campaigns is that you play to the base to win the nomination and pivot to the center in the general election. With Donald Trump, the pivot never came. He kept playing to his rabid base and has consistently done so throughout the eight months of his presidency. But has his pivot finally arrived?

Cue The Chuck & Nancy Show. Fed up with Republican leadership, Trump’s cozied up to Democrats in an effort to make deals with the goal of ‘winning’ and reversing his abysmal approval ratings. Rather than work with Senate Leader Mitch McConnell and House Speaker Paul Ryan, he’s marginalized them over DACA, border security, the debt ceiling and Hurricane Harvey aid. And in the same week he’s also backpeddled on his border wall and the Iran nuclear deal.
Predictably, Republicans are livid with Trump over his newfound “bipartisan” romance with Democrats.

"At this point, who DOESN'T want Trump impeached?" tweeted Ann Coulter. She added, “If we’re not getting a wall, I’d prefer President Pence.”

“Exactly what @realDonaldTrump campaigned on. Not,” tweeted Andrea Ingraham. She later added, “BUILD THE WALL! BUILD THE WALL! … or … maybe … not really.”

And Rep. Steve King (R-Iowa) warned that Trump’s base is “blown up, destroyed, irreparable, and disillusioned beyond repair.” He called the purported Donnie/Chuck/Nancy DACA deal “Republican suicide.”

So is Trump’s sucking up to Chuck and Nancy part of a much bigger political calculation? Has he realized that the re-election math makes way more sense if he pivots from his 30% base and starts providing policy goodies to the other 70% instead?

“I could stand in the middle of Fifth Avenue and shoot somebody and I wouldn't lose any voters,” Trump once infamously crowed.

So far the MAGA crowd’s proven Trump dead right. No matter how much he lies to them or reneges on campaign promises, the base stays loyal and committed. As such, perhaps Trump knows he has nothing to lose and everything to gain by shifting his focus to moderate Republicans, independents and, yes, even Democrats. Maybe he knows that an electorate so exhausted and frustrated with crazy Trump may be ready to embrace mainstream Trump. And that the base will manage to find a way to justify it all and stick with him.

One thing we’ve learned time and again with Trump is never to under-estimate his instincts and political barometer. So here’s my perfect storm: his bi-partisan shift is real and sustained over time; he weens himself off Twitter and the persistent trouble it causes him (i.e this weekend when he retweeted a fake video inciting violence against Hillary Clinton, while also referring to North Korean dictator Kim Jong Un as “Rocket Man”); and he somehow manages to survive the Russia investigations. If he succeeds, we just might be looking at another four years of this roller-coaster presidency...
Posted by The Ostroy Report at 12:23 PM