RussiaGate, Republicans and the Redefining of American Patriotism 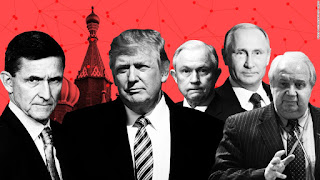 There used to be a time when Republicans were the tough-talking, patriotic, red-baiting, Democracy-defending standard-bearers. Not anymore. Partisanship no longer ends at our shores. These days the GOP and its kleptocrat commandant Donald Trump act more like tools of the Russian government. Like they’re on Vladimir Putin’s payroll. Like maybe Putin has something incredibly incriminating on them (hooker pee pee tapes, money laundering?). Because there’s no other explanation for this unfathomable shift to such blatant Russian-ass-kissing behavior.

Seventeen United States intelligence agencies have unanimously concluded that there was Russian interference in last year’s election, primarily limited to email leaks and fake news. We’ve now learned that Putin-backed troll farms have used Twitter, Facebook and other social media platforms to spread lies and manipulate the electorate. But in 2018 and ‘20 it could include actual tampering of voting machines, materially impacting the vote count.

Donald J. Trump Jr. also met with high-profile Russian intermediaries in July 2016 to get dirt on Hillary Clinton. His official explanation is that the meeting, which was also attended by Manafort and Kushner, was to discuss Russian “adoption” policy. But his subsequent release of emails related to the meeting illustrate that its true purpose was to acquire information directly from the Putin regime that "would incriminate Hillary and her dealings with Russia and would be very useful to your father."

It’s entirely possible Trump himself attended one or more of those meetings.

While the issue of lifting U.S. sanctions is suspected as being the primary underlying Russian motivation of all these meetings, the bigger issue of interference in the election and possible Trump campaign collusion has been the subject of House, Senate, FBI and special counsel investigations.

Since he announced his campaign in May 2016, Donald “I Love Wikileaks” Trump has fed this conspiracy theory with unyielding acceptance of Russia’s interference in the election. He’s mercilessly maligned the intelligence community and has done everything in his power to obstruct the ongoing investigations, including firing former FBI Director James Comey. In May he told NBC’s Lester Holt:

“And in fact when I decided to just do it I said to myself, I said, “You know, this Russia thing with Trump and Russia is a made-up story, it’s an excuse by the Democrats for having lost an election that they should’ve won.”

The very next day Trump hosted Russian diplomats in the Oval Office where he mocked and demeaned Comey, telling the Russians:

“I just fired the head of the FBI. He was crazy, a real nut job. I faced great pressure because of Russia. That’s taken off.”

Trump’s obsessively denied, discredited and disrupted the investigations with irrational, manic Tweeting, and has impugned the integrity of our free and open press, relentlessly attacking it as “fake news” and “an enemy of the people.”

As such, we’ve been witnessing the greatest test of checks and balances in United States history. Which brings us to Republicans in Congress. Those spineless, self-serving oligarchs who’ve sanctioned and encouraged this unconscionable anti-American, potentially treasonous behavior from the Trumpsters. This ‘equal branch of government,’ responsible for oversight of the presidency, has instead been acting like paid Trump lobbyists.

Senate Majority Leader Mitch McConnell and House Speaker Paul Ryan have literally been playing Russian Roulette with America’s security as it hungers for tax reform and huge cuts for the rich and big corporations. They’ve sold their souls for money. They’ve allowed Putin to attack us, influence our election, and undermine our democracy. Congress’s silence, and impotence, is stunning.

Russia is America’s biggest global threat. It’s an enemy state which seeks to destroy democracy throughout the world. Judging from our chaotic transfer of power these past eight months, Putin’s already succeeding. He doesn’t see left or right. Just Russia. The existential threat from more invasive cyber-attacks remain. Our democracy’s been kicked in the nuts, and Republicans just don’t seem to care.

Most mystifying is the behavior of Trump voters—the xenophobic, Confederate flag-waving, National Anthem defending, NFL-bashing “USA! USA! USA! crowd who, pre-Trump, would be calling for the execution of anyone colluding with Russia—who suddenly don’t give a shit that America’s under siege from Moscow and that the president is the reason why.

But special prosecutor Robert Mueller’s independent investigation is intensifying. Subpoenas are flying, and indictments could follow soon. High-profile targets including Manafort, Flynn, Stone, Boris Epshteyn and perhaps even son-in-law Kushner and Don Jr. could end up singing like canaries to avoid prison, which would be the nail in Trump’s coffin.

To be sure, the Feds are closing in. Trump’s days are numbered. It’s just a matter of time. No thanks to Republicans.
Posted by The Ostroy Report at 10:49 AM