The Letter Obama Wished He Could've Given Trump 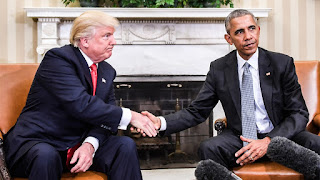 Last week we learned the content of the letter Barack Obama left in the Oval Office for incoming president Donald Trump. It was anything but the traditional “Hey bud, it’s an awesome job, good luck!” It’s a carefully worded cautionary missive which clearly indicated Obama’s concern for America’s future. Below is the letter we all now he wanted to give Trump:

You did it. You won. I never thought you would pull it off. Honestly? I thought you were a goner the minute you started. “Mexican rapists” isn’t a great way to launch a successful presidential campaign. But then you went on to insult women, immigrants, blacks, Jews, war heroes, John McCain, Gold Star families, disabled people, judges, the intelligence community, the media, Democrats, fellow Republicans, the Pope and just about everyone else who got in your way and yet you still won. You were right: you probably could shoot someone in the middle of 5th Avenue and your base would still support you.

But now here you are. President of the United States of America. Commander-in-Chief. Leader of the Free World. This isn’t a fucking game. It’s the hardest job on the planet. It’s not sitting around Trump Tower deciding which shitty towels to slap your name on. You are now responsible for the safety and security of 325-million Americans and people all over the world. Are you up to the task?

You’re like a million guys I’ve seen in my life: huge ego and a microdick. So you’re constantly trying to compensate with bombast, braggadocio and bullying. By having an insatiable hunger to ‘win’ no matter what the financial, political or human cost. You seem devoid of compassion and empathy. Some even claim you’re a sociopath, but I’m not ready to go there...yet. But I am scared. You scare me Trump, and I don’t scare easy. I still can’t believe I have to hand the baton to you. You make 43 look like a statesman.

So what are you going to do? Are you going to lead by example? Will you unite Americans in these highly toxic, polarized times or will you further divide us? Will you take the highroad and uplift the nation and be a beacon of light or will you slink further into your dystopian darkness? Will you be the president of everyone or just your 35% base? Will you uphold the rule of law? Will you honor and respect the Constitution? Will you inspire our children? Will you truly make America greater, or will you spiral it into a terrifying vortex of ignorance, intolerance and hate?

You cannot let your ego and emotion direct your words and actions. You must grow some balls and thicker skin. You have to act like a smart, mature, curious, disciplined president with impulse-control, not a petulant manbaby.

So, man to man, get the fuck off Twitter and stop acting like an asshole and be the man your wife and kids keep telling us you are. Because so far we haven’t seen that dude.

Call me if you need anything.