No, Trumpsters, Donnie Has Not Been "Vindicated" 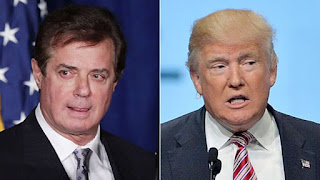 The Breitbart News headline Tuesday screams “Trump Vindicated!” It follows the news this week that the president’s former campaign manager Paul Manafort was wiretapped by the U.S. government before and after the campaign. Investigators on special prosecutor Robert Mueller’s in July raided Manafort’s home and he was subsequently told to expect an indictment.

The wiretap came under secret order of the FISA (Foreign Intelligence Surveillance Act) court after the FBI began investigating Manafort in 2014 over consulting work done for Ukraine's former Party of Regions and it’s leader Viktor Yanukovych.

In an effort to distract attention away from the mounting RussiaGate scandal and its impact on his administration, the Liar-in-Chief, in a March 4th tweet, accused former President Obama of spying on him during the campaign:

“Terrible! Just found out that Obama had my "wires tapped" in Trump Tower just before the victory. Nothing found. This is McCarthyism!

Trump refused to produce even a shred of evidence of such surveillance.

And now the Trumpsters are claiming he’s been “vindicated.”

No, he hasn’t. Actually, it’s the good guys, the U.S. government, who’ve been vindicated.
FISA doesn’t just throw around search and surveillance authorizations just for the fuck of it. It doesn’t engage in partisan witch hunts. The government must demonstrate probable cause. The targets must likely be guilty. Which is why Manafort (and perhaps others) may soon be indicted.

So let’s dissect the “vindication” logic in plain English: Trump and his cronies did some really bad shit. They know they’re guilty. They know the Feds are on their trail. They consistently do everything they can to discredit and distract from the investigation. Trump throws a hail Mary and claims he’s been “tapped.” Now we learn the government tapped Manafort. Because he and Trump are likely guilty as sin. Which is why FISA issued the order in the first place. And the Trumpsters claim ‘AHA! Trump was right!’ Nope. It’s the investigators who are right. Trump’s just a desperate, terrified, guilty manbaby.
Posted by The Ostroy Report at 12:55 PM