It's 'Little Bone Spurs Man' vs The World 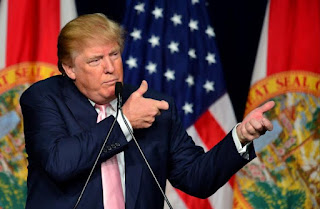 It's been a tough couple of weeks for Donald Trump. The Pugilist-in-Chief took on everyone from world leaders to athletes. The self-described counter-puncher mixed it up—both on and off Twitter—with Kim Jong Un, Hillary Clinton, Sen. John McCain, Jemele Hill, ESPN, Stephen Curry, the Golden State Warriors, Lebron James, the NBA, Colin Kaepernick, Roger Goodell and the NFL. I don’t know about you, but I’m exhausted.

With the Unites States and North Korea seemingly on the verge of nuclear war, Trump’s chosen geopolitical strategy centers on taunting Kim by calling him “Little Rocket Man” while threatening during his United Nations address to “totally destroy” him and his country. It’s Battle of the Psychos time.

(It was during this same address that Trump twice incorrectly referred to the African nation of Namibia as Nambia).

Trump attacked McCain’s “courage” over his intent to vote against Graham-Cassidy, the huge and heartless “fuck you” to Americans disguised as a health care replacement for Obamacare.

Trump once again demeaned the entire U.S. intelligence community, and special counsel Robert Mueller, by referring to the RussiaGate investigation as a “hoax.”

Trump was widely criticized for retweeting a fake video of him hitting a golf ball into Hillary Clinton’s back, knocking her to the ground. He also cyber-bullied her again, attacking her on Twitter over her book and election loss.

Trump attacked Hill and her network, ESPN, over her comments that he is a “white supremacist” and demanded that she be fired.

Trump “un-invited” Curry to the White House after the Warriors superstar said he wasn’t going to attend the traditional celebration following his basketball team’s 2017 championship win. The entire team then decided to blow it off as well. Lebron James called Trump a “bum” over his behavior.

Trump condemned Kaepernick and other NFL players who’ve taken a knee during the National Anthem in protest of racism in America and the president’s own racist rhetoric. He called on fans to boycott games until NFL owners “fire” the “son of a bitches.”

Call me crazy, but taking on the beloved gridiron institution might just be the first time that Teflon Donnie’s instincts may be counter-intuitive. It’s a bigly miscalculation if he thinks his angry, white, chips ‘n beer guzzling couch-potatoes are gonna choose him over football. That in a showing of solidarity they’ll spend Sundays tending their gardens or playing gin rummy with the wife. Fat chance.

The Trump shit storm has reached Category 5 status. The “chaos president,” as Jeb Bush once astutely predicted Trump would be, appears hellbent on creating more scandal and controversy for himself instead of using his time to prevent the North Korea crisis from escalating while also lobbying Congress and voters in an effort to push through his agenda.

But policy bores Trump. Being president, and actually accomplishing things, is not what motivates him. What turns him on is the fight. Antagonizing anyone and everyone over anything at any time. It’s so ironic, because when his time came to actually fight, in the Vietnam War, he was a shameless draft-dodging coward who hid behind his rich pappy’s connections and deferment-causing ‘bone spurs.’ A terrified elitist brat who was too good for war. War was for “losers” like McCain, who Trump has claimed is not a “real hero” because “he got captured.”

Well let me tell you something, Little Bone Spurs Man, real men like McCain have more “courage” in one single strand of hair than you have in your entire bloated, bloviating being. But of course you already know that, which is why you’ve spent your entire life overcompensating for this overpowering self-hatred by putting everyone else down in order to build yourself up.

Posted by The Ostroy Report at 9:24 AM