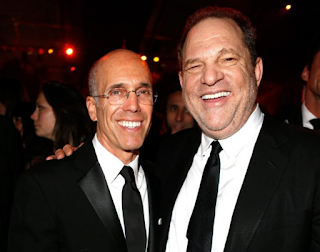 Ok, so now we know that Harvey Weinstein is one of the most notorious sexual predators in modern history. In just the past week dozens of women have come forward with unconscionable allegations of harassment, assault and rape. It’s almost certain that over the next days and weeks many more will share their traumatic encounters with the disgraced movie mogul as well.

It’s been a fast and furious ride downhill since the lurid details of his sexually deviant behavior became public. The board of The Weinstein Company fired him, his wife left him, he entered rehab and he could be facing criminal charges.

Katzenberg received an email last weekend from a "desperate" Weinstein in which he was asked (along with other Hollywood bigshots) to publicly defend him, "stating your opposition to the board firing me."

Now here’s where it gets really interesting and, quite honestly, a huge what the fuck? moment.

Katzenberg was extremely rattled by Weinstein’s request and wasn’t sure what to do.

"I was paralyzed," he told The Hollywood Reporter. "I didn't know whether I should not respond, or respond and express the way I truly felt."

Katzenberg hemmed, he hawed, he contacted all his friends to ask for advice. He finally felt compelled to come forward and risk the possible consequences.

Well guess what, Jeff? The personal torment, the fear, the apprehension, the concern for your reputation that you essentially described going through is exactly the same thing every woman who’s attacked by lecherous pigs like Weinstein go through. Except they lack your money, your power, your connections, your safety net. They’re alone. Alone against the Old Boys Club, which protects the abusers, and even the Old Girls Club, which this week appears chaired by fashion designer Donna Karan, which excuses, justifies and enables their criminal behavior with unfathomably misguided suggestions that victims “are asking for it” because of how they dress.

Think about this, Jeff: you felt “paralyzed” because you were asked by an old friend to defend him. Imagine how Weinstein’s myriad 22-year-old victims felt when he sexually assaulted them. Think of how paralyzed, afraid and unsure they felt about coming forward. Unlike you, they have everything to risk. Perhaps now you might better understand why women don’t come forward. And why, as a result, the brazen sexual abuse continues.