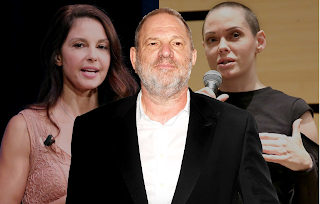 So another predatory, sexual-abusing male-chauvinist pig bites the dust. Harvey Weinstein, the bombastic bully independent film studio head, was fired by the board of his own company of the same name Monday following a tidal wave of condemnation over allegations of sexual harassment and abuse in what insiders are calling Hollywood’s best kept secret (although Bill Cosby was indeed a very well-protected rapist). But did the board act because they just found out about his offenses, or because we just did?

You’d have to be living under a rock not to have heard at least one unconscionable tale of Weinstein’s infamously despicable behavior. One former employee told me of being assaulted by lit cigarette butts flicked in anger. Another associate told of Weinstein’s hostile demand that an actress undress for a photo shoot despite her persistent objections. We don’t need to be the actors Ashley Judd or Rose McGowan (two victims who came forward years ago) to conclude that when it comes to Weinstein, where there’s smoke there’s a 12-alarm blaze. Just as all the allegations against Cosby are likely true. As well as the abuses admitted to by the United States president.

But is change, however slowly, coming? Perhaps it helps that we live in the age of the internet and social media, where accusations of scandal spread with lightening speed, gaining brutal, unforgiving momentum like the California wildfires. Are men finally learning what bad behavior is? Or might they be fearing Google and Twitter’s career-ending wrath should they be caught with their proverbial pants down? Maybe. And it certainly feels like women are fighting back more than ever. That women are saying, “Fuck you, you’re not gonna get away with this...I don’t care how powerful you are....I will take you down!”

To be clear, the system still shamefully protects predators. As long as men control Hollywood, Wall Street and Main Street there will be sexual harassment and abuse. And as long as these subjugated women feel powerless, they will be pressured to tolerate this abuse. We certainly have a long way to go before women feel truly safe in the workplace.

The ‘Old Boys Club’, while perhaps losing membership, still exists. Just consider that only a week ago Weinstein was still safely perched on his cinematic throne instilling fear in just about everyone in Tinseltown. Cut to this week and there’s a groundswell of public denunciation. While great to see, cries from the bandwagon are a bit disingenuous. The post-apocalyptic tweets, although welcome, are a bit late. They come without cost. Where were these condemnations before the emperor fell? McGowan and Judd have yelled ‘he has no clothes’ long before his demise.

The silence has been deafening. The system, and attitudes, need to change, as does the power structure. Women cannot fear coming forward after they’ve been harassed or abused. They need to feel safe. That their characters won’t be assailed. That they won’t be ostracized. Or shamed. That they won’t lose their jobs and be blackballed. And that they won’t be accused of “asking for it” because of the way they dress, as fashion mogul Donna Karen unfathomably suggested this week (I mean, seriously Donna, what...the...fuck?!).

Which brings us to Dear Leader. The Pussy-Grabber-in-Chief. The mercurial manbaby who never met a vagina he didn’t like (whether or not that vagina wanted to be liked). It sure feels as though he’s gotten away with the despicable sexual transgressions he’s been accused of by about three-dozen women, doesn’t it? But I’m an optimist, and I believe that Donald Trump, just like Harvey Weinstein, Cosby, Roger Ailles and others before him, will also one day meet the fate he deserves.

Posted by The Ostroy Report at 1:32 PM