The United Base of America 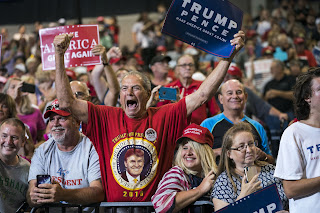 The conventional wisdom is that during the primaries candidates appeal to the extreme wing of their party and then move to the center in the general election campaign. Trump re-wrote that playbook. He was elected by his base, he continues to play to his base and the only Americans he gives a shit about are his core Trumpsters. The base. The 30% who, as Trump himself bragged, would still support him even if he shot someone in the middle of New York’s 5th Avenue.

Trump thrives in the us vs them game. He needs an opponent. An enemy he can scapegoat and use as a wedge in his war against Democrats, Republican leadership, the intelligence community, the media and anyone with a half a brain.

In his battle against the truth Trump has created a very convenient narrative: that he’s an amazing, historically successful president who never errs. And when he does screw up, when his words and actions are incorrect, insensitive and/or unconscionably offensive, it’s summarily discredited as “fake news” perpetrated by the “enemy of the people” media. Trump’s insulated his base from reality, and therefore himself from their scrutiny, scorn and likely abandonment. He was elected president by his base once (with the help of independents and even some Democrats) and he’s convinced himself they’re all he needs to win again.

To understand the Trump phenomenon requires understanding Trump himself. He is a thin-skinned, petulant, juvenile manbaby who craves constant attention, credit and praise. He is motivated purely by the affirmation of others. By an insatiable hunger to be told how great he is at all times, under any circumstances. He is tone-deaf, empathy-bankrupt, devoid of compassion and ginormously self-consumed. His self-worth is unfathomably low and his self-loathing painfully high. Which is why he cannot even begin to feel any measure of personal satisfaction unless he’s putting others down. He conflates the accomplishments and success of others as perception of his own failure. Which is why he must always be the smartest, biggest, best and most successful person in the room. He’s so horribly uncomfortable in his own skin that he’s terrified of us in ours.

Trump’s ego is so frail and easily bruised that he’s aggressively attacked disabled people, cancer patients, parents of dead soldiers, the Pope and anyone else who threatens his tortured, microscopic id.

Which is why Trump remains in constant campaign mode. Why he continues to hold rallies. Why he continues to cater only to his base. They’re the ones who love him. Unconditionally. He can pathologically lie to them 24/7, outsource their jobs, take away their healthcare protections, waste their tax dollars and even grab their pussies. They...don’t...fucking...care. Because their racism trumps everything else. Trump knows this better than anyone and masterfully stokes these flames of bigotry. The base is his Manson Family. They will do whatever he tells them.

It doesn’t matter to Trump if he gets caught in perpetual lies. He doesn’t care about saying and doing outrageously offensive things. He’s created an alternate universe in which his base resides and he is king. It’s a land of make-believe, where angry white men deserve all of America’s spoils. He doesn’t care about you or I or anyone else who gets frustrated and enraged by his vile behavior. By his impulsiveness and mean-spiritedness. By the fact that he is so woefully unfit to be president. He laughs at us. Because he’s president and we’re not. And because we’re not his constituents.

Trump’s brainwashed his base to believe him and no one else. Ever. Even if they’ve seen things with their own lyin’ eyes. Even if they’ve seen videotape. Heard the words come out of his own mouth. It’s all fake, all the time. Part of the great big establishment conspiracy to undermine him. The Trumpsters are loyal to a fault.

And so the base is where manbaby goes when he needs love. When he needs affirmation. Needs to block out his abysmal approval, mounting scandals and fear of his inevitable fate.