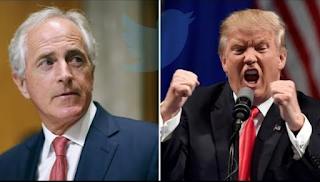 When you go beyond Donald Trump’s base there are two buckets people fall into: those who are public with their serious concerns about the president’s mental stability and those who worry privately. This weekend we witnessed a stunning example of the former.

One of the most powerful Republicans in Congress, Sen. Bob Corker (TN), engaged in a Twitter battle with the Manbaby-in-Chief, and then gave a scathing interview to the NY Times. Corker, the chairman of the Senate Foreign Relations Committee and a former Trump supporter, has been very critical of the president lately. He first went public with his criticism in August following Trump’s controversial comments regarding the racial violence in Charlottesville, VA. Earlier this month he stood by those comments with a stinging attack on the president’s fitness to serve.

"The President has not yet been able to demonstrate the stability nor some of the competence that he needs to demonstrate in order to be successful," Corker said.

Sunday morning Trump unleashed a tweetstorm against Corker, accusing him of not running for re-election because he “didn’t have the guts.” He also claimed Corker “begged” for his endorsement and also asked to be the nation’s top diplomat.

"I said 'NO' and he dropped out (said he could not win without...my endorsement). He also wanted to be Secretary of State, I said 'NO THANKS.' He is also largely responsible for the horrendous Iran Deal!...Hence, I would fully expect Corker to be a negative voice and stand in the way of our great agenda. Didn't have the guts to run!"

“It’s a shame the White House has become an adult day care center. Someone obviously missed their shift this morning.” Drop...da...mic...

The senator also refuted the accuracy of Trump’s comments, stating that it was the president who called him, urging him to run again and promising his endorsement. Washington insiders claim that it was the Trump administration which sought Corker for for State cabinet post. Corker was also vetted by the Trump team as a vice presidential running mate.

Corker’s one-two punch continued Sunday night with the NY Times interview, in which he accused Trump of treating the presidency like a “reality show,” acting “like he’s doing The Apprentice or something.” He warned that Trump’s reckless threats to North Korea could set America “on the path to World War III.”

Corker claimed the Trump White House is in a constant state of chaos because of the president’s erratic behavior.

“I know for a fact that every single day at the White House, it’s a situation of trying to contain him,” Corker said, adding, “He concerns me. He would have to concern anyone who cares about our nation.”

We need more Republicans like Corker to go public with what we know they’re all feeling. By his own words and actions Trump has demonstrated that he’s out of his f**king mind, is woefully unfit to serve, and the nation’s security and well-being is at grave risk as a result.

To be sure, the GOP leadership has been an embarrassment and a disgrace. Senate Leader Mitch McConnell and House Speaker Paul Ryan have sat back and watched Trump piss all over the Constitution and the Oval Office. They’ve shamefully allowed him to collude with Russia and obstruct the ongoing investigations; to offend and alienate our allies; to embolden our enemies; to defend neo-Nazis and white supremacists; to attack our independent judiciary; to malign the intelligence community; to attack our free and open press as “the enemy of the people;” to defy our rule of law; to undermine his own cabinet; to tweet his way into failure and irrelevance; to chase away from the party real conservatives like Corker and thus deepen its existential crisis; and to divide America to a level we haven’t seen in fifty years.

The GOP leadership—and that includes vice president Mike Pence—needs to grow some balls. It needs to recognize, accept and act on the realities of the Trump presidency. It’s time to impeach. Or enact the 25th Amendment. Or both. Or to convince Trump to resign to avoid a humiliating removal from office. They’ll be aided in this effort by special prosecutor Robert Mueller, whose independent investigation will surely end in indictments.
It’s time to end this f**king circus.