Sean Hannity is Obsessed with Me 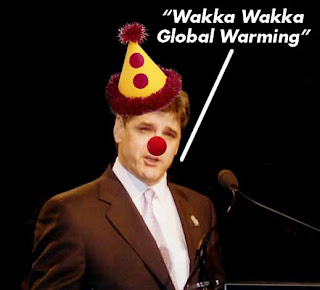 I'm flattered. And ecstatic. I seem to be getting under the very sensitive Republican skin of Sean Hannity, the right-wing talking-head who's so shamelessly partisan he's actually starting to look like the GOP elephant. On multiple occasions he's read my blog to his audience like Dylan Thomas at a poetry reading. The latest rant occurred this past Monday. Same old Sean. He mocks my writing, asks "who is this Andy Ostroy?" and then, preferring to talk behind my back, refuses my repeated challenges to put me on the air for a debate so I could expose him for the knowledge-less bloviating buffoon fraud that he is.

Hannity often boasts that Sen. Barack Obama's always talking negatively about him but refuses to come on the air and face him mano-a-mano. But when the shoe's on the other foot, Hannity hides like a rat in a snakepit. C'mon Sean, man-up. You have nothing to fear but the truth. I'll be waiting.....
Posted by The Ostroy Report at 5:45 PM

Sean Hannity is a hatefilled lying son of bitch who ought to have his ass kicked.. He like other Republican scum hide behind the flag and vets to promote their hateful agenda of wars and divisions and he makes a ton of money doing just that.
HOPE YOUR READING THIS YOU COWARDLY, LYING BASTARD!!
VietnamEra Vet

Too bad you put so much effort in this blog.
Hannity wouldn't even take the time to reply.
I have a little time-
So I say SHUT UP AND DO YOUR HOMEWORK.

Obama is an empty shirt- a socialist!
Google: Chappaquiddick- and then:

Governor Palin and her family have been BATTERED by the left-wing, liberal Obama-maniac "in the tank for Obama" media since she arrived on the scene.
There is a small army of investigators on the ground in Alaska- trying to dig up dirt on Palin as we speak. This is sexist.

Barry Hussein Soetoro Barack Obama is a left-wing, socialist "empty suit."
Barry has no experience- except how to get lots of campaign contributions, manipulate the media and avoid answering the tough questions.

Obama and his surrogates are playing "The race card"- NOT the Republicans. (Did you see what (D) Sebelious said about "code words"? Disgraceful.


Democrats are not Democrats anymore. They are liberals- left wing extremists.
Republicans- are no long Republicans- in the old sense of the world.
Senator John McCain and Governor Sarah Palin are REFORMERS- in the mold of Ronald Reagan.

Now- for all you independents and undecided voters- Google these:
(Obama-maniacs- don't bother. Just keep drinking the Kool-Aid)


It's the company you keep and it's EXPERIENCE that counts.
McCain-Palin '08

Open your minds, hearts and minds and watch:

well you do seem to get the wing nuts quite fired up and busy...you must be doing something right.

I disagree with one thing you said Andy----Hannity is NOT a Republican, he's a warmongering, Neocon chickenhawk who works with all his other little Neocon buddies along with the weak-assed pipsqueak Alan Colmes at the White House channel.

“Opening up the health insurance market to more vigorous nationwide competition, as we have done over the last decade in banking, would provide more choices of innovative products less burdened by the worst excesses of state-based regulation.” John McCain

oh, and to the wingnuts who want to scream about obama being a socialist...dont know if you have noticed, but overnight, the banking and mortgage industries were both socialized...by your repuke prez

and of course hannity is afraid of you andy...he has never debated a strong progressive, and cant think beyond the talking points he has been handed by the rnc and rove

and damn...that boy is getting fat...move over rush...their is a new fat bloviator in town

Why should Sean Hannity give you the time of day? In the scheme of things you are a nobody. Additionally, by your own words you think all is fair and fine in order to win. Hannity reads your blog because you are a poster child of a left wing nutjob. While you are usually pretty off, since Sarah Palin came on the scene you have spinning wildly out of control. Don't you have any friends taking you aside trying to help you? We will never agree on much but it is really sad to see you going downhill like this.

hey Sparky...I'm apparently so significant in Hannity's life that he opened his Monday show about me. He's already, on multiple occasions, given me "the time of day"......but only as a spineless chump where I can't defend myself. He's a gutless NancyBoy real-man- wannabe who I'd reduce to an ignorant buffoon. If I'm important enough to repeatedly talk about on the air when I'm not around, then he should have not have a problem giving me airtime when I am....that is, of course, if he had any balls...which he clearly doesn't.

And, NewsFlash: the only thing "spinning out of control" since Palin's appointment is McCain's poll numbers.....and not in the intended direction.

Jeez, making you Repugs look foolish is like taking candy from a baby......
Andy

hannity is a big fat pussy....he talks tough on the set and on radio,but he can never face andy in a real debate.......ALERT ! THE REPUBICANS ARE A BUNCH OF BED WETTING PUSSIES,THEY CAN'T HANDLE IT WHEN SOMEBODY CALLS THEM OUT.......(they are crying the obama camp is going negative)stop crying like little girls........RUSH,SHAWN,SAVAGE,MCCAIN,CHENEY,BUSH,ETC

I've really been digging your writing lately. Just dropping you a note because I tried to engage one of Hannity's little synchophants, Andrew Wilkow (he who is "the undisputed leader of the New School"), and neither he nor his Producer were having it. I completely abused him via e-mail and after trying several times to get through on his Sirius show, finally just gave up. I must've missed Hannity talking about you, because I listen to him quite a bit. Hopefully he'll do it again, so I can hear him go off the rails.

PS...I watched "Waitress" a while back and absolutely loved it.

Sorry you can't see your downward spiral. It is there. As for Monday, Hannity of course gave your panic stricken suggestion to replace Biden air time. It was great fodder for talk radio.

As for not bringing you on his show, again you are a nobody and have not achieved enough status for that. Also, your lunatic ravings on this blog do not give the impression you would not be the same on radio. I can see you ranting and raving non-stop instead of having a dialogue. He'd have to cut your mic to get you to take a breath. Nah, don't flatter yourself. You are not ready for prime time.

And by the way, Hannity's CDS has clearly been replaced by ODS.

The man is a complete and utter tool.

The problem with moneyminded Hannity, pagan Limbaugh, the vulgarian Levin etc is that they are uneducated. Just listen to their deliberate distortions, simulation, solecisms, mispronunciations, ignorance of kindergarten level facts and you can only be amazed. Most regrettably the audience they talk to and rant at are also ignoranuses (sic); they mouth "catchcries of the clown" they happen to hear on EIB network. Incredible that anyone could call this station "excellent". Undoubtedly Levin, Hannity, Limbaugh "fumble in the greasy till . . . add halfpence to the pence till they have dried the marrow from the bone". Totally without principle other than a nakedly mercenary one they exploit a pathetically inadequate listenership.