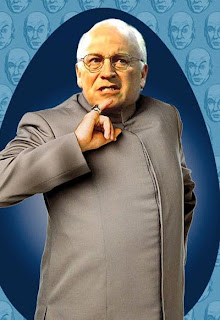 During the eight miserable years of the Bush administration, then-vice president Dick Cheney lied, deceived and stretched the truth as he and the president sought to ram their extreme right-wing war-mongering agenda down our collective throats. And heaven help anyone who got in their way:

"If you're against the president and his policies, you're unpatriotic and rooting against America."

And now in the face of President Obama's plan to shut down the controversial prison at Cuba's Guantanamo Bay, Cheney's classic irresponsible and reprehensible partisan rhetoric is running on overdrive. He's an un-lean, mean 24/7 Obama-bashing machine who's giving us "If you're against the Bush/Cheney torture and Gitmo policies you're rooting for the terrorists." This posturing is beyond despicable. And if it's at all possible, he's an even bigger dick than ever.

What Cheney's trying to do, and perhaps successfully, is set the stage so that in the event a terrorist attack does occur again on U.S. soil, he and the other shameless partisan hacks can place the entire blame on Obama's reversal of several Bush/Cheney "enhanced interrogation techniques" such as waterboarding. As a precursor to that, Cheney's ratcheting up the rhetoric that Obama is a weak commander-in-chief, incapable of keeping America safe. Forget the fact that the worst terror attack occurred on Bush/Cheney's watch. Forget the fact that it was eight years between the first and second World Trade Center attacks, yet the Busheviks boasted of anti-terror success after just 6 or 7 years as if passing that mark somehow meant the threat was beyond us. Forget the fact that just three months into his presidency Obama deftly ordered Navy snipers to kill Somali pirates who had held an American cargo ship captain hostage. But as in the past, the truth doesn't matter to Cheney, as he marches on to redeem himself from his perch as the most unpopular vice president in history.

Now let's consider the concerns about closing Gitmo. LA mass murderer Charles Manson has been locked away for almost 40 years in a California maximum security prison. Other serial killers like John Wayne Gacy, Jeffrey Dahlmer and Ted Bundy, or the Oklahoma terrorist Timothy McVeigh, also rotted in the United States prison system before they were either executed or killed by fellow inmates. The deranged "Son of Sam" killer David Berkowitz is serving a life sentence without parole. And locked away in a high-tech prison in Florence, Colorado, known as the toughest slammer on Earth, is Unibomber Ted Kaczynski and radical Islamic terrorists Ramzi Yousef, Zacarias Moussaoui and shoe-bomber Richard Reid. Guess what? Not one of these butchers have busted loose.

But according to Cheney's convoluted, disinegnuous logic and rationale, no matter how many innocent people these evil monsters have killed, maimed and tortured--and there are thousands--they must be a bunch of pussies to be incarcerated for so long without successfully escaping in the grand Houdini-like fashion that Cheney would like us to believe will occur if we close the controversial jail and import the suspected terrorists into America's prisons. C'mon people, nothing could be more idiotic.

It's ludicrous to think the United States government lacks the overall resources to securely imprison Gitmo's detainees. Are we really supposed to believe that somehow these prisoners will ultimately end up walking the streets of small-town America? Are we really supposed to believe that while Manson, Kacynski, Yousef and countless other murderous beasts rot like caged animals in U.S prisons, this new breed of Gitmo uber-terrorist is too strong, too wily, too dangerous to be incarcerated on American soil? The suggestion that we can't transfer and successfully imprison Gitmo's detainees is not only preposterous, it's offensive to any American with even half a brain. This is simply another shameful Republican politicization of one of America's darkest days. It's a desperate attempt by a near-dead, fear-mongering party to once again lie to the American people about a threat that doesn't exist. Fear, fear and more fear. Where have we seen this routine before?

And if Dick Cheney truly wants to keep the country safe from terrorists, he should stop trying to scare the crap out of everyone. He's the worst terrorist of all.


On another note, we could use your help at The The Adrienne Shelly Foundation. We're a 501 c 3 tax-exempt, non-profit organization dedicated in my late wife's honor, and with a simple mission: supporting women filmmakers. Adrienne, who wrote, directed and starred in the hit film WAITRESS, was killed November 1, 2006. Through the Foundation, her commitment to filmmaking lives on. We've established scholarships, grants, finishing funds, screenwriting fellowships and living stipends at NYU's Tisch School of the Arts/Kanbar Institute of Film; Columbia University; American Film Institute; Women in Film; IFP; the Nantucket Film Festival; the Tribeca Film Institute; and the Sundance Institute. Your generous contribution will go a long way towards helping us achieve this very important mission. Please click here to make a donation. Thank you.
Posted by The Ostroy Report at 5:05 PM

Remember how every time Kerry crept ahead in the polls, they'd announce some hither-to unknown "terror stopping act?"

Cheney wants to cash in, you watch.

Hi Andy, excellent post. Dick Cheney is called Dick for a reason. Checkout this site for further inside into his nature. http://margaretandhelen.wordpress.com/

What amazes me is that people even listen to him when he lied us into the war in Iraq.

I write about him and those who lack open minds and hearts and also about ways for us all to wake up more to be better citizens and compassionate human beings at www.explorelifeblog.com

You are on a mission, keep it going,

Let the cheap and cheating draft dodger pose and strut all he likes. That won't change the fact that he is an old fool and a cheap liar who is totally unfit for public office. Everything about Cheney is crass and cheap. He is a greedy megalomaniac whose sense of superiority stems from his own self-delusions and deep-seated sense inadequacy. Cheney has been exposed as an embittered blustering cowardly thug. He has always been a cheap moron with a oversized ego and perverse sense of entitlement. The real tragedy is that America in the 21st Century is prepared to stomach such a poisonous idiot.

We should all note that none of the really prominent Republican spokesmen are presently holding elected office. Not Cheney, not Gingrich, not Limbaugh. I think that is a clear statement that those Republicans who are elected know just how representative are the views of those who are speaking so loudly.

Since the attacks of 9-11 were, at the very least, aided by the corrupt criminals running our government, as evidenced by the facts, it would not be beyond the arc of reason to believe that the gang of scoundrels are prepared to destroy yet another bunch of Americans lives in order for them to make the claim that Obama was wrong in closing Guantanamo. Smedley Butler, a great patriot, exposed a treasonous plot from the right wing terrorists among us who were bent on overthrowing FDR. Obama needs to be vigilant that the festering hatred from our current batch of dead-enders, bent on destroying this country, continue to build and infiltrate his administration. Had the FDR administration prosecuted the treasonous vipers then, perhaps, the hazards now confronting us would not be present. Like FDR, Ford allowed Nixon to escape prosecution and now it looks like Obama is about to give the murdering Bush bastards a get out of jail free card. When will we learn?

I have two questions:

2. Has anyone considered the enormous breach of our principles when Truman dropped the first (and only) atomic bomb on Japan "to save Amewrican lives."? Many who hate the torture of three detainees still approve that act on the part of our government.

Can we have some clear thinking, please?

The Republicans make me sick. They have nothing to offer but attacks and the MSM helps them along. I sure hope those with marginal thinking skills do not fall for their same old same old tactics.

Having said that, Dick is only trying to influence any prospective jury pool.

I think this article misses one point. It's not only about whether they could escape or not, it's about what happens if they are brought to the U.S. and then not convicted, which is highly likely given the different rules for accepting coerced confessions as evidence, not being read their rights, etc. Not to mention that many of them are no doubt innocent anyway. So the question is, what will be done with them after acquittal? I'm all for shutting it down ASAP. But I give the benefit of the doubt to Obama, who has looked at it and decided on a more nuanced approach. It's Bush/Cheney's mess, so don't blame the guy trying to solve it for not having very many good options.

And another thing: doesn't anyone see that Cheney is grabbing publicity in advance of his book deal? That's why he's stirring up the fear again, to sell his book. And to grab the "I told you so" position in the event of any sort of attack on the U.S. or other setback. Disgusting. Stop giving him so much credit.

would anyone like to know what dick was doing on 911? He is more than a great terrorist. During the 911 investigation a senator testified that an airman was reporting to dick that the plane is 5 miles out and do the orders still stand? Dick shouted Of Course the orders still stand to the airman, this was just before the pentagon was attacked. Look it up.

@David, the real fear the MSM is putting out is that having these individuals in our prisons will enable their ideas to infect the rest of the prison population. This latest foiled plot in the Bronx was supposedly hatched while in prison.

The most likely means of escape would be for the ACLU and high powered attorneys falling all over themselves to represent these terrorist thugs will manage to allow them to walk out the front door and onto our streets.