Shame on You California 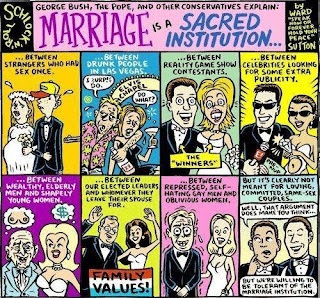 The California Supreme Court had an opportunity Tuesday to do the right thing and overturn the thinly-passed Proposition 8 gay-marriage ban which the state's Homophobes voted into law through a ballot referendum last November. To no one's shock or surprise, they upheld the controversial decision, even as many other states like Massachusetts, Connecticut, Iowa, Vermont, Maine, New Hampshire, New Jersey and New York have moved to legalize such unions. Clearly, not everything progressive originates in The Golden State. This time, California can bask in its regressiveness (Prop 8 was an answer to an earlier Supreme Court ruling last May to allow same-sex marriages). So, "the will of the people" wins, and logic, fairness and tolerance loses.

But Tuesday's court decision wasn't a total bust. They did throw homosexuals a bone (pun intended) by grandfathering in the roughly 18,000 gay marriages that took place between June and November. The fact that 36,000 gays will be able to live with straights in peaceful, non-institution-threatening harmony, as one big happy California marital family, is itself inherent proof that the ban is truly a whole lotta nonsense about nothing and worthy of absolute repeal.

I still don't get why, when we're fighting two wars, terrorists, an economic meltdown and a need for universal health care, certain people seem to care more about whether gays and lesbians legally marry. Is this really an issue? In trying to understand the motivation behind the opposition, I once again turned to my Republican pal Bryant, my right-wing muse and trusty barometer of all things politically irrational and illogical, who also happens to live in California. Bryant and narrow-minded, intolerant folks like him use as their biggest argument that the legalization of same-sex marriages threatens the sanctity of heterosexual marriage. But, through their intensely vocal opposition, they often fail to mention that some of them, like Bryant himself, have actually been married as many as three times. Kind of an odd little factoid for someone who passionately defends the institution they claim to hold so dear and wish to protect from all those domesticated queer folk. The hypocrisy, the blatant double-standard, is infuriating.

There can be no sanctity in hetero marriages when people like Bryant piss on the 'sacred' institution by getting divorced whenever they feel like it. The phrase "till death do us part" is not a cherished vow to these people, but a cliche catchphrase that's honored until they no longer have any use for it. These liars break their vows every day and then stand in judgement of gays, claiming to be better than them; more deserving of the great institution of marriage. I'm sorry, but the whole "do as I say, not as I do" bullshit is enough to make you puke.

And if it's not the "sanctity" card these homophobes are playing, what is it then? Is it simply a personal bias against gays? That they just don't believe in homosexuals getting married? Well, there are lots of ignorant bigots who don't believe in interracial and interfaith marriages either. How about we start passing laws and voter referendums banning these unions too? Where do we draw the line?

The nation's gay-bashers need to stop being such narrow-minded, frightened little twits. Don't worry boys, legalizing gay marriage doesn't mean some stealth homo's gonna sneak up on ya and suck your dick. Truth is, these amped-up testosterone-drunk assbags would probably like it, which is why they and so many other "straights" are always so preoccupied with what a couple of queers do to get off. As I like to say, those who bash the hardest are the ones with the biggest closet.

To be sure, there's nothing American about discriminating against anyone on the basis of race, religion, gender, age or sexual orientation. Banning same-same sex marriage is morally wrong, it's unconstitutional and, as so many progressive states have shown us, it's just a matter of time before there's a happy ending (pun intended) to this story.

On another note, we could use your help at The The Adrienne Shelly Foundation. We're a 501 c 3 tax-exempt, non-profit organization dedicated in my late wife's honor, and with a simple mission: supporting women filmmakers. Adrienne, who wrote, directed and starred in the hit film WAITRESS, was killed November 1, 2006. Through the Foundation, her commitment to filmmaking lives on. We've established scholarships, grants, finishing funds, screenwriting fellowships and living stipends at NYU's Tisch School of the Arts/Kanbar Institute of Film; Columbia University; American Film Institute; Women in Film; IFP; the Nantucket Film Festival; the Tribeca Film Institute; and the Sundance Institute. Your generous contribution will go a long way towards helping us achieve this very important mission. Please click here to make a donation. Thank you.
Posted by The Ostroy Report at 2:06 AM

This will not stand. You can't outlaw some gay marriages (Prop. 8), but then allow 18,000 gay marriages that took place before Prop. 8 passed.

A court challenge is on it's way and/or a new prop to overturn Prop 8. It's like the CA Supreme Court did not want to deal with it.

GOP agitprop, designed to cleave you away from your economic interests and the interests of the safety of your and yours, and the long-term security of this nation.

The GOP wants this stuff to stay out there festering, so they can cut taxes on the rich and build deficits during times of plenty so they can swoop in an buy your assets on the cheap when times are tough without gov't able to do anything.

Until folks see that, they're suckers for the GOP media machine.

The government should allow legal civil unions with well-defined rights to all couples whiching to unite in a partnership; and, each church should then choose to, or chooese not to unite the pair in a religious ceremony. It is obvious that the couple could choose or not to be blessed by a church ceremony. We really need separation of church and state.

As a long-term California resident, I have to take issue with a portion of your complaint.

If the gay marriage issue were left only to the California voters without outside money bankrolling a huge PR campaign, Prop 8 would have been handily defeated. This would be due to the majority of Californians really having no issue with gays and their private lives.

The proof of this lies in the lame excuse of an opinion issued by the CA Supreme Court. They kept the Mormons happy by upholding the ban, but attempted to keep the peace with everyone else by not reversing the 18,000 gay marriages already performed. They are straddling the fence with this "justice", and are expecting that someone else will take on the responsibility of enraging the radical religious community with the correct ruling.

Where your complaint remains valid is that this homophobic voting bloc was not taken seriously by the supporters of gay rights. The supporters didn't lift a finger in defense of those rights, assuming that the Christians would do as they generally do: stay home if the election doesn't include president or governor. It took outside money (and the abuse of that money to endlessly recycle Gavin Newsome's in-your-face gloat over the corporate media) to mobilize the Christian bigots enough for them to leave Bible Study and go vote. Gay marriage advocates didn't understand that the ubiquitous repetition of Newsome's comment was like tossing a lit match into gasoline, and thus did nothing to rouse gay rights supporters to go vote and ensure victory in defeating a return to the Middle Ages.

We Californians are not finished with overturning this un-Constitutional abuse of minority rights. We will find some way to put the Christian troglodytes back into their stone mausoleums to study their Old Testament, while those who have read the New Testament and try to live it spread the word that we will ensure that the law will treat everyone as we expect to be treated - straight OR gay.