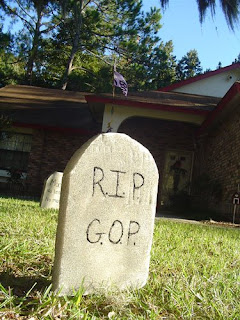 You can stick a fork in the once mighty right-wing GOP. The Republican Party, to quote the hilarious Billy Crystal character in the magical film The Princess Bride, is "mostly dead." The majority has clearly swung to the center, becoming a much more moderate representation of the party. Statistics now show that more Americans have abandoned religion and the hot button social issues that used to be conservatives' bread and butter campaign themes. What's more, the evangelical wing, the party's core base just a few short years ago, has shrunk to negligible, insignificant levels.

It's 2009, and we have a black president, a black chairman of the Republican National Committee, a female House Speaker, and gay marriage laws being passed around the country. How sweet it was to see President Obama acknowledge RNC head Michael Steele at the recent White House Correspondents Dinner with a jovial "Wassup, Michael!? Michael Steele is in the hizzy!" This is definitely not your father's America. Finally.

The nation is reeling from the worst financial crisis in 80 years, and it's mired in two wars which are sapping our financial and emotional resources as we struggle to keep the country safe from terrorists.

And then there's President Obama, who tackled the controversial subject of abortion head-on in yet another brilliantly delivered speech at Notre Dame last weekend--as he did with race back in 2008--and which proved, by the overwhelming support of students and faculty alike, that the staunchly conservative pro-lifers who tried unsuccessfully to undermine his appearance are in even smaller, more insignificant ranks than ever before.

Obama is also doing more to bridge the nation's great political divide than any president in history. My dear friend Bryant, a die-hard Republican, and who for years I've used as a barometer to measure the pulse of the fringe wing of his party, sent me an email Monday acknowledging Obama's bi-partisan efforts, but somehow the real meaning and intent of them was lost on him:

"...Obama's at least smart enough to sense that we live in a center right country. That’s why he kept Gates. That’s why his speech at Notre Dame called for each side in the abortion debate finding common ground with the other side. That’s why he appointed a Republican as ambassador to China (Utah Gov. Jon Huntsman)."

What Bryant, and others like him, have failed to grasp is that our president--an inexperienced 46-year-old black man named Barack Obama, who Republicans have called the most liberal Democrat ever--managed to get himself elected by bringing a new message of hope, change and bi-partisanship to our sick nation. These are themes on which he campaigned. Promises he made to voters. That Bryant reduces this to some cheap political triangulation strategy--something to be mocked--once again proves that the extreme right-wingers out there still do not understand how and why they lost the White House and both houses of Congress last November, or why they're about to hand Democrats the Senate's first filibuster-proof majority in 30 years. Clearly, if we're judging the nation's political leanings by the actions of voters, this picture is hardly one of a "center-right" country.

The more Republicans fail to see why they lost, and why Democrats won...and the more they continue to waste time, energy and financial resources on abortion, guns, God and gays instead of focusing on what voters really want, which is an end to war, recession and the incessant partisan bickering that ravaged our political system under Bush/Cheney, they will never again hold power, and their party will go from mostly dead to all dead.
Posted by The Ostroy Report at 7:20 AM

I totally agree, Andy, but I do not trust the Republicans and how they keep going after folks. They are the masters of spin and framing issues. They still control the media. I never remember the Democrats being so much in the news when they were not in power.

But President Obama is a genius and I love him being my president.

Having said that though, now the Republicans are trying to blame the whole torture mess on Speaker Pelosi who was under a secrecy obligation to not say anything about the briefings.

The Neocons have done a great job of destroying the republican party. Democrats should be careful though, the Neocons are starting to drift back to their ancestral home on the left.It's going to be the Dem's turn next

Oh, give me a break. Every time Boehner stands in front of a podium, or Newt 'the wife cheater' Gingrich has a conniption, you see the DINOCRATS cower in fear with their tails between their legs, with a pool of 'piddle' on the floor under them.

There's been no change since Obombaton took over, or more to the point, was installed on the hand of the puppet masters behind the curtains. He's a marionette, and the GOP filth knows this. Also, it's very ironic and strange that they excoriate someone who's for the most part, done nothing but install right wing nutcases to all of his cabinet positions, and that his foreign policy is another GOP train wreck waiting for another 9/11 false flag attack by Cheney murderer moles in the Air Farce to carry out.

So spare me the; "oh, the GOP is over with" bullshit. If they were truly over with, this country wouldn't be headed deeper into a morass of torture, illegal wars, and looting for the Military Industrial Complex. The Obombaton has taken us precisely where the Kabuki Theater GOP fuckers want us to be. In total, utter ruin.

If that's "never going to rule again", methinks you are a tad disingenuous and full of crappola!

Yea, like all those tons of new voters were fake.

So please sit down and let the rest of us carry on. You are way too negative to see reality.

Anybody who votes at the federal level is a stupid a**hole, and is actively helping to destroy this country.

As many people have commented, the Presidency needs to be abolished. The mere fact that so many certifiable blockheads believe that the President is the emperor of the free world, and should be personally responsible for solving every problem in existence, is reason enough to get rid of it, and force these nitwits to deal with their own lives. When in hell did this country turn into a bunch of lily-livered, braindead, medicated pussies who need people like Oprah and Dr. Phil to be the national shrinks and counselors, anyway? Anybody?

The answer is for each state legislature to sever the cord between themselves and DC, if you really have any interest in "Freedom Accomplished."

I think you are all missing the point of the article. Yes, there are powers we don't see but control alot of what we do see; washington is evil and no one is to be trusted, blah blah blah, what's new. however, there is a shift in the creepy domain of washington that people should start talking about solving problems in logical, respectable ways. Then we can get to the real problem and solve it for many more people(not everyone, contrast that with what happened in the last 16 years where nothing happened and look where we are.) I think it's a postive shift and results will come slowly. it always does when we're talkin about 300 million people.

If the Democrats including Obama had run on a leftist platform instead of resorting to deception of their true agenda, we would have seen a different election result.

Instead they ran a center-right campaign and now govern from the left.

When the people are given a clear choice without deception and hidden agendas, they vote center-right every time.

imho........it's going to take another "landslide" "one-sided"
"mandate" election to convince the
cowering dems (and the sniveling limpublicans) that it just wasn't a fluke. It's going to take buckets
of money falling into their laps from lobbyists to re-awaken them to the possibilities of that old fashioned thing they only read out in history books - A DEMOCRATICLY CONTROL GOVERNMENT............

We want a more activist government and that is exactly what we voted for.

GOPers are in shock that we like our president.

Tough. Get over it!