How the Internet is Killing Our Economy 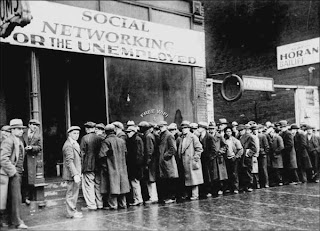 The United States is facing the most challenging economic crisis since The Great Depression of the 1930's. And if you ask me, the greatest technological invention ever, the Internet, is in no small part responsible. In fact, I believe the Internet is not only killing our economy, it's shredding our social fabric as well.

To be sure, the Internet is an incredibly useful medium. It's been a genuine paradigm shifter, altering the way we communicate, research, travel, shop and organize, educate and entertain ourselves. It allows us to do all of these everyday tasks faster, more efficiently and more cost-effectively...often times even free. And therein lies the gargantuan problem of the Internet.

As someone who's formed and runs a few businesses, I can tell you firsthand that free is not good. Free never shows up on a P&L or a balance sheet. Free doesn't fatten the company's coffers and allow for growth and expansion. And you can't pay bills with free. In short, and to use the vernacular of my 16-year-old son, free, in business, sucks.

Yet, the Internet is all about free. We can get our newspapers and magazines for free. We can watch televisions programs free. We can download movies and music free. We can book our own travel, send free mail, make free phone calls, send free greeting cards. We can, thanks to MySpace, Facebook and Twitter to name a few, even socialize for free, never having to leave the house or spend one red-cent actually socializing the way truly sociable folks used to.

Think about all the businesses, all the people, who've been slammed by this economic black hole called the Internet. Consider how much money has literally been sucked out of America's GDP by this rapacious beast which resides in our laptops, PC's, iPhones and Blackberries. Look how it's destroyed the music business, travel agencies, the publishing industry. It's killed the movie after-markets, like DVD. Look at the strikes it's caused in Hollywood, because somehow studios think that viewing content on a computer screen instead of a TV screen somehow gives license to screw writers out of their residuals.

Think of all the money not spent in cafes, bars, lounges, restaurants, clubs, video stores, and book stores because of the proliferation of impersonal, intimacy-starved social-networking sites and free-content sites. Somehow, when it came to the Internet, businesses decided the only way to truly attract a scalable audience was to give them everything free. But now that the economic shit's hitting the fan, our corporate titans may be coming to the long-overdue realization that capitalism and free are about as successful a marriage as Karl Rove and Queer Eye's Carson Kressley.

Just this week one of those corporate uber-moguls, Rupert Murdoch, announced that his News Corporation will begin charging for content on his newspaper websites within a year in a direct answer to what he calls the current "malfunctioning" business model. Citing the enviable success of the Wall Street Journal's growing online subscription revenues, Murdoch said that newspapers were experiencing an "epochal" debate over charging consumers for content. Murdoch's a guy who likes to make money. I'll bet he'll make it all work and have the last laugh. Hopefully, others will follow suit.

I'll say it again: free sucks. Nobody can make money by giving their products and services away for nothing. There can be no profit without revenue. And without revenue all you have is expense, which leads to bleeding red ink. The more people like Murdoch who wake up and smell the cyber-coffee, the sooner our economy and our once-thriving capitalist society can get back on track. When companies and individuals make money, they spend money. Just because a business operates online doesn't mean all that good old fashioned Wharton Business School stuff doesn't apply. Let's keep all the speed, the ease, and the efficiency of the internet, but how about making people pay for it all, just like everywhere else? Duh...
Posted by The Ostroy Report at 10:50 AM

The sharing of information is the real enemy.
The Internet is unlocking minds at an exponential rate.
Keep it free.

"capitalism and free are about as successful a marriage as Karl Rove and Queer Eye's Carson Kressley."

Never saw the show, but I wouldn't doubt Karl's a queer. And maybe the problems not "free" it's "capitalism". Just a thought.

Andy - Interesting blog, but unfortunately narrow minded. Free sucks. For you and me. Bosses!! But for people making minimum wage, or the 8.9 percent of unemployed people across the nation, free doesn't suck at all.

Now it comes digitally. It gets lost when their computer or iphone breaks or becomes obsolete. You can't really collect them or put them on a shelf. You just listen, watch it or read it and your done.

Should it be free? Maybe not. Music figured out a pretty good way to charge for it. (iTunes.) But it should be cheap. VERY VERY VERY Cheap. Even 99 cents is too much. I acutally use a site called emusic for my tunes. Subscription. Much better.

There's also advertising. Ads for REAL stuff that people can use and should pay for. I know ads are not making the same money as selling "stuff" use too. But tough. Business are saving money because they don't have to produce as much. "Stuff".

At the end of the day, business people just have to not make as much money. And people should get use to not wasting as much and not consuming as much. Which in the big picture is a good thing.

Someone moved your cheese. Find a different way to get cheese. Or just eat less.

Sad to say newspapers should have never given their papers on line for free. But that genie is out of the bottle and there is no turning back.

If I am mistaken in reading this piece as satire, then I worry about you, Andy. This and the last couple rants, about facebook and twitter, sound like preparatory exercises for standing on the front porch with a shotgun fulla rocksalt, shaking your fist at teenaged passersby and and hollering "damn kids!"

The internet is, of course, not a business model. It is, rather, a world-wide public works project begun here in the States, I'm proud to say, to better humanity by facilitating information exchange. It is an encyclopedia galactica, a hitchhikers guide to the galaxy, and Carnegie's public library concept all rolled into one.

Yes, it's possible to MAKE BIG MONEY WITH NOTHING BUT YOUR HOME COMPUTER AND THE INTERNET!-- for example, you could sell advertising space on your blog. Many do, some even are able to make a living at it.

So really, what's the problem here?

A number of good points made here, taking everything into perspective. The Internet certainly has played a part in all of this. But . . .

A huge reason for the demise of the "mainstream" newspapers is that the Internet has exposed them as propaganda mills for the federal government. They are as much an adjunct of the government as were their ideological siblings in Nazi Germany and the USSR. They worked overtime to lie this country into two endless genocidal pre-emptive wars of aggression against countries who couldn't represent a threat to the U.S. if they wanted to. They have monolithically demonized anybody who has the nerve to point out the absurdities and lies of the "official" 9/11 conspiracy theory. Etc., etc., ad nauseam.

So it is not the multi national corporations stealing off the top and sending American jobs to third world countries. It isn't the theft of billions of dollars by Wall St. or the Lending Institutions that are a problem. NO, it is the internet , because the idea of someone, anyone actually giving away ANYTHING for free is just ghastly. Good God , man get your head on straight.

Many institutions limit access to their online information. Making this information available will be an asset to all.