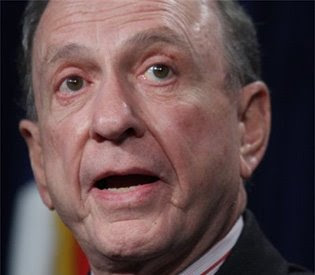 Everyone knows that politicians are altruistically-motivated, selfless do-gooders whose unadulterated patriotism compels them to volunteer to serve country and countryman. So it came as an absolutely stunning shock Tuesday when Pennsylvania Senator Arlen Spector announced he was switching his party affiliation to the Democrats in a move designed to win re-election. I'm still reeling from the rarity of such a self-serving act by a politician.

RNC Chairman Michael Steele, another shining example of that unbridled selflessness that permeates the Republican Party, said Spector "left to further his personal political interests because he knew that he was going to lose a Republican primary due to his left-wing voting record." Now when has a politician ever done that, huh?

And in an admirable call for balance and bi-partisanship, Kentucky Sen. Mitch McConnell warned: "The danger of that for the country is that there won’t automatically be an ability to restrain the excess that is typically associated with big majorities and single-party rule." Translation: the party of "no" just became the party of "zero power."

These jilted Republicans also attempted to minimize the significance of Spector's defection--which would give Democrats a filibuster-proof majority once Minnesota's Al Franken gets confirmed after his legal battles with incumbent Norm Coleman end this Summer--by calling it an isolated regional case:

"This is not a national story," McConnell said. "This is a Pennsylvania story about his inability to be renominated by the Republican Party or be elected as an independent. He made a totally political decision."

Ever the reliable delusionists (or liars...take your pick), I guess they're forgetting that Republican incumbents across the country got their collective asses kicked last November. Or that Bush and Cheney's abysmal approval ratings were lower than the age of the average MTV viewer. Or that the approval ratings of Republicans in Congress right now is half of that of the Democrats. Or that Maine's moderate Republican Senators Olympia Snowe and Susan Collins could quite possibly be the next to defect. Yeah, Spector's exodus is just a lil ole Pennsylvania problem, Mitchy.

The real kicker here about Spector? He's actually the kind of politician we all can and should respect. He votes his conscious and his principles, not his party. Yet the Republican leadership hates him because his voting record with the GOP is 65% not 100%. Forget that he's voted for the Iraq war, supported Bush's Supreme Court nominees and tax cuts, supports school vouchers, supports gun ownership and opposes gay marriage. That's not conservative enough. That he's pro-choice and voted for Obama's stimulus package makes him a traitor to the party in their myopic, lockstep-marching eyes.

Spector's no dummy, and he knows the highly effective and stauchly conservative Club for Growth will lavish support and money on a much more radically right-wing 2010 GOP primary opponent. So he's outsmarted and outmaneuvered them. And they will lose again.

To be sure, the GOP is a dying party. To the benefit of Democrats, it's been hijacked by the far-right-wing fringe hellbent on ramming its conservative social dogma down the throats of Americans while alienating and losing its moderate faction. Just as Ronald Reagan famously said in 1962 when he switched parties, "I didn't leave the Democratic Party. The party left me," Spector too had felt abandoned by the party, saying the GOP had "moved far to the right" and his political philosophy became "more in line with Democrats." Let's hope there's a lot more like Spector who start feeling the love across the aisle...
Posted by The Ostroy Report at 7:44 AM

Yes, Spector made the move to keep his seat, but what he said about the Repubs being too far to the right is also true.

Don't forget that on procedural votes he will vote with the Dems even though when the vote comes to the floor, he might vote against the bill. Getting the vote to the floor is mostly what it is all about. The Dems do not walk and vote in lock step. And I wouldn't want them to do so either.

I don't see how Collins and Showe could stay in the GOP. Their state went for Obama by 18%.

Another point about self-serving - he's 79 years old and running for another 6-year term? Democrat or Republican, has it occured to him it might be time to pass on the baton?

I'm not holding my breath here as Lieberman could still flip as a Repug to nullify things.