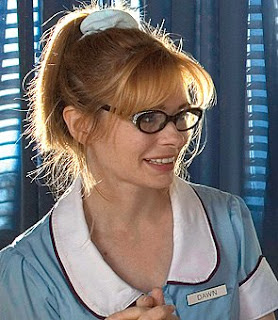 Most people know me here as a guy who frequently rants about the latest Dick Cheney drivel, the Republicans being the "Party of No," or how ludicrous it is to award million-dollar bonuses to Wall Street's TARP babies. Throw in a little Obama euphoria and that's me in a nutshell. But what they don't often know is that I also run a non-profit foundation that supports women filmmakers with scholarships, production grants, finishing funds and living stipends, and that this foundation carries the name of my late wife, Adrienne Shelly, who was brutally murdered in 2006.

Adrienne wrote, directed and starred in Waitress, the critically-acclaimed box-office hit of 2007. But it was not the first feature film she wrote and directed. There were two others. She struggled, like most filmmakers--especially women filmmakers--to get their work produced. And it is in her honor that the Adrienne Shelly Foundation was founded to help other very talented women get their films made.

It's all for a great cause, so check it out and place some bids if you can. Click here to be directed to our eBay Store.

As a side note, Adrienne wrote a script after Waitress called Serious Moonlight. It's a film I'm producing with Waitress producer Michael Roiff, and it has its world premiere April 25th at the Tribeca Film Festival in New York. Directed by Cheryl Hines, it stars Meg Ryan, Timothy Hutton, Justin Long and Kristen Bell. How wonderful that movie audiences will get to see another Adrienne Shelly-penned film.
Posted by The Ostroy Report at 7:36 AM

I know you as Adrienne Shelly's husband. I can't wait to see Serious Moonlight.

What Tom said. Adrienne was born five years to the day before me, and her death messed me up pretty badly, which is to say at most 0.1% of what it must have done to you. So goddamned senseless.

And yet you're doing wonderful things in her name, including bringing "Serious Moonlight" to the screen. I can't wait.

Thank you so much.