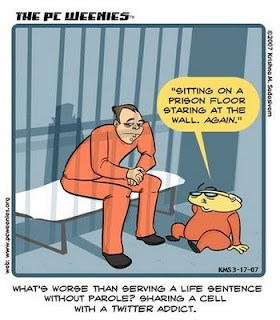 If I hear the word 'Twitter' one more time I think I'm going to go virtual postal. Same goes for Tweet, Tweeted, Twittering and Tweeter.

A few weeks ago I wrote about how much I hate Facebook, that colossal online abyss of narcissism and inanity. Well, I think Twitter--the micro-blog of 140-character vacuousness--annoys me even more.

Full disclosure: I am neither a 'Twit' (my name for Twitterers ) nor have I ever been on the ubiquitous site. And I don't need to be. I am simply sick and tired of how it's invaded the American lexicon, and culture, like all of these other internet sinkholes that continue to shut people off from each other while claiming to be "social networking" sites. Pretty soon moms will be tweeting their kids to come pick up their dinner plates so they can head back to their laptops for more of this incredible "socializing."

More disclosure: I'm on Facebook, where I've been known to be quite a shameless promoter of the various business dealings I'm involved with, which include those of a charitable nature. I believe sites like Facebook and Twitter do offer great business networking value. But unfortunately, it's become far less a business tool than a tool for extending one's Warholish 15 minutes to insufferable levels.

Last week we saw the inanity reach epidemic proportions with the self-described "Twitter Feud" between the actor Ashton Kutcher and cable news giant CNN over who could pile up 1-million Twits quicker (Kutcher won). This utter non-story quickly sucked up lots of valuable media time, with Larry King devoting almost his entire hour to it Friday night.

Does anyone really care how many Twits Kutcher has...besides of course, Kutcher himself and his loyal Twits? Is this really news? It's a sad commentary when, with two wars, terrorism and a devastating recession, Facebook and Twitter is where young people's passions get channeled and focused. It's unsettling how today's youth is so desensitized, disaffected and self-consumed. And it's not just kids who are addicted to this too-cool communication form. Hearing some age-loathing 50-year-old describe his Twittering is about as painful as listening to him gush about the latest Death Cab for Cutie concert.

Kutcher, whose Twitname is @aplusk (the kid's clever, huh?), was joined on King's program by rap and fashion mogul P. Puffy Daddy Diddy, or whatever he calls himself these days. The Puffster, when asked by King (btw....is there anything more embarrasing than Larry King describing his own hipster Twitting?) why he Tweets, His Diddyness lamented that, "People know me for the persona of the Hamptons, bling, who I'm dating, and there's more substance to me than that." Twitter, he said, allows him to cut out "the middleman;" the media, which he blames for his self-admittedly shallow public persona. So let's get this straight. He's not shallow because he's a jewelry-heavy, model-datin', Hamptons-hangin' bad boy; he's shallow because the press covers it all. Yup, this sure sounds like a problem that non-stop Twittering can fix. And I'm sure his 600,000 followers will eagerly soak up all his words of wisdiddydom. Actually, in fact, I just realized there is something more embarrassing than King talking about his Twittering: Diddy whining about how nobody understands him.

And then there's Mr. One-Million himself. "At the end of the day we all have ego," said Kutcher, the self-proclaimed Twit "Jester" in a ginormous "duh" revelation. In explaining that everyone has their own "Twitter DNA" (huh?), he defines Twitter as "an ego stream," and then modestly declares that it'll be a good thing if people like him can use Twitter to "change the world." Can you say, self-important? This coming from a guy who's biggest claim to fame is Punking his celebrity pals and having stepkids almost as old as he is (ok, I exaggerate, but I have comedic license). I'm just not exactly sure that we've seen any "world-changing" initiatives coming out of Kutcher or anyone else on Twitter. But we sure as hell have seen a lot of that ego he talks about.

Ok, I'm done ranting. I'm gonna go scr@tch my ass now. Hey, maybe I should Tweet that.
Posted by The Ostroy Report at 7:15 AM

Andy, telling the kids to get off the front lawn a bit much here, eh?

"Blogs" are near dead for popular use. It's how to get the sheep from the dogs.

Fewer people will write tomes about nothing, but tidbits about everything.

Those left who do keep writing at length will hopefully raise the average quality and see it all as an opportunity.

This is a message to the individual who repeatedly sends in comments under the name "Larry." I am the screener working with Andy. He only sees the ones that make it past me, and given the unacceptible nature of your posts, he never sees them, as they are immediately rejected. You're welcome to keep writing, but it just seems like it is an awful waste of time for you. If you can try to get your points across without all the combativeness I'm sure they'd make it through, just like everyone else's. I'm sure you have it in you to be nicer!:)
Loren

Loren -- I see your point about Larry. We've all read his rants over the years. However, there used to be a larger number of responses to Ostroy's comments. Some were with him and some were not which made for, I thought, stimulating exchange of ideas and points of view. Now, at the most, there are only about five to eight responses. Surely you're blocking others' comments in addition to Larry's. Ostroy's comments are always so strong and thought-provoking. Why are you stifling responses?

I can assure you, 99% of all comments are being posted. The only ones that do not make here onto Andy's blog are those that are combative, involve name-calling and or are off topic. And in all honestly, the only posts being rejected have come from one person in particular. So, nothing's changed except for that person. I hope this helps.
Loren

You said it buster
@willyoumarryme

Your twitter story reveals to me a non TWIT er or facebook user I'm 62 what a pathetic self centered culture we are developing. I liked what you said...hari

I absolutely could not agree more, nor could I have said it better. I look around me these days and see the level of mindless, pointless, self-indulgent activity that people - yes, especially the young ones - are wasting their lives on and I am just astonished. I mean, sure John Lennon and Bob Dylan and all the rest were doing drugs and partying too much, but my GOD. At least they seemed to concern themselves from time to time with something that actually mattered in the society! How did we get here in just one generation??? Thanks, Andy.

I have found both Twitter and facebook to be very useful for exactly the other political points Andy wants to make.

Twitter is very momentary and best for keeping up in Real time with what is happening. If it passes in a few hours and I don't see it. Oh Well.

Facebook is very similar but longer slower and more local keeping up with what is happening. Again if one is a day or so late it is gone and probably less relevant by that point in any case.

What I do not like is E-mails that is Andy's favorite means of doing the same thing. My email is clogged with stuff that I never have the time to even wade through and the titles are shorter than on Twitter, but is usually all I have to go by before hitting the Delete Button or the read already button that will amount to the same thing.

I would much rather see Andy write his blog and then link it on Twitter or Facebook than send out emails. That way I would at least not have to weed out the email box as often. Then if you commented on another site you cold post that on Facebook as well rather than having to write to the blog.

PS This is also what I do for Blog, Comments, and Twitter, each getting its various degrees of attention as warranted.