Fannie and Freddie's Fuzzy Math: $100 Billion in Losses = $210 Million in Bonuses. Bring on the Outrage 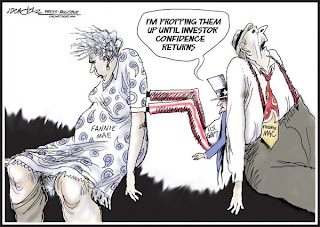 Back in January, President Barack Obama said it was "shameful" that near-bankrupt insurance giant and bailout-baby AIG was awarding $400-million in "retention" bonuses to the very same reckless Wall Street cowboys who damned-near sank the entire U.S. financial industry with their ultra-high-risk credit default swaps and derivatives shenanigans.

In the ensuing weeks and months, Obama's personal outrage turned into a massive anger-fueled populist movement that called for everything from an immediate return of the bonus money to criminal prosecution of those who took it. How dare they was the overriding sentiment in Washington, Albany (NY Attorney General Andrew Cuomo demanded a return of the money against threats of publicly naming the executives), the media, and in living rooms across America. Legislation soon followed, with a 90% tax on the bonus money. There, that'll show 'em.

And now comes the news that failed mortgage giants Fannie Mae and Freddie Mac--which own or insure more than half of the nation's mortgages--are about to hand out $210-million in bonuses of their own, also to "retain" the high-priced failures who've nearly destroyed them, and who for some reason they can't seem to live without. The bonuses will cover 7,600 employees and are as high as $1.5 million. Yes, these are the same two behemoths who combined lost $100 billion last year.

The kicker here? The Fannie/Freddie bonuses have been defended by the companies' Federal regulator, James B. Lockhart III of the Federal Housing Finance Agency, who intends to approve the payouts. Lockhart is a Bush man, appointed by the former president in 2006. Obama has the power to name a new chief regulator, but he so far hasn't, which is a mystery. So what we're left with then is a de facto endorsement of these outrageous bonuses by the Obama administration, and therefore an inexplicable contradiction of its prior public thrashing of AIG.

Lockhart, the taxpayer-paid G-man, incredibly espouses the same hogwash regurgitated ad nauseam by the Wall Street brass themselves: "These payments send a signal that we think people are important and we want to keep them. If the bonuses are rescinded, it sends the exact opposite signal, and it would be extremely dangerous for the American economy to lose these workers at this point."

Excuse me? I'll tell ya what signal it sends. It says we in this country don't know what the fuck we're doing. It says to the world that we let a bunch of greedy gamblers create insanely high-risk financial instruments which erased trillions in investor equity and then saved their sorry asses with taxpayer-funded bailouts. Oh, and we then gave them million-dollar bonuses as rewards for manufacturing this unprecedented shitstorm. How's that for a signal?

Posted by The Ostroy Report at 7:36 PM

You could not be clearer Ostroy Thanks for expressing exactly how I feel. I just don't get what Obama is doing. Is he protecting Fannie and Freddie because it was the Dems under Clinton who encouraged those two agencies to give loans to to those who coudln't afford them so poor people could have homes too? The whole thing is a mystery to me but I and everybody else is suffering from it. Obama better stop with the mixed messages.