What Obama's Done for America's Confidence 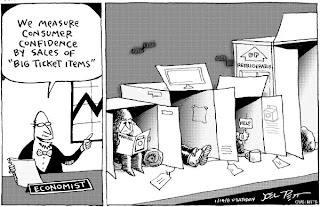 What is a recession? What constitutes a bear stock market? In both cases, it's nothing more than perception. It's the collective belief by consumers and businesses alike that things are bad and getting worse. And it's mostly a self-fulfilling prophecy. Americans stop spending, corporate profits turn to mounting losses, and massive layoffs follow. And it's a vicious cycle. We therefore create the very things we fear most. When that happens, nothing can turn it around except a very different perception. The shifting sentiment that things are looking better.

Which brings us to a new ABC News/Wall Street Journal poll released Monday indicating that 50% of Americans now believe the country is headed in the right direction, versus just 8% in October, before the presidential election and three months before Barack Obama took office. Additionally, the Consumer Confidence Index released Tuesday showed a significant increase to 39.2% in March vs. 26.9% in February. Throw in Obama's approval rating, which hovers around 65%, and it's a pretty safe bet that Americans are starting to feel much better about the nation's leadership and the overall direction of the economy and the country.

When consumers start feeling better about things, they spend. It starts with little things like clothes, toys, books, etc. They take extra trips to the mall. Then they slowly return to big-ticket items. They buy electronics, cars, houses, take vacations. And when they spend, it fattens corporate earnings. And that leads to job growth, reinvestment and spending on capital improvements. Pretty soon, recession turns to prosperity. Of course, I'm over simplifying, and an economic recovery can take a long while to achieve any appreciable measure of growth. But all signs point to a bottoming, and that would mean the crawl back upward begins. Whether we experience a V, U or L-shaped recovery is anyone's guess. But it would appear that a recovery, however slow, is at least underway.

Obama's critics can bark as loudly as they wish and continue playing the partisan rhetoric game, but the simple truth is that his first 100 days have achieved major progress in turning around the economy, restoring consumer confidence, and curbing the hemorrhaging in both the banking and housing crises. Not bad for 100 days..
Posted by The Ostroy Report at 7:32 AM

President Obama had done so much to help us through these times. We are so lucky he came along.

It is a pleasure to watch the GOP self destruct. Senator Spector switching parties is a wonderful thing to see. Now if the two senators from Maine follow him, we would really be able to get things done.

- Illegal warrantless surveillance and wiretapping of American citizens has continued under Obama.

- Top Bush administration officials who ordered torture and those that carried it out have been protected from prosecution under Obama.

- Top Bush administration officials who deceived America into a war have been protected from prosecution under Obama.

- The expansion of the military empire through continued occupation of Iraq and Afghanistan and further military incursions into Pakistan have continued and expanded under Obama.

- Banker bailouts, reckless spending, inflation of currency through overprinting and global regulations stifling the free market, all of which were initiated under Bush, have continued under Obama.

- The militarization of the United States and the architecture of the police state that was set up under Bush has been preserved and expanded under Obama.

- The attack on the second amendment right to bear arms has continued under Obama.

But naturally Andy, you mention NONE of these things.....I wonder why. What has he DONE for America's confidence? All he's done was showed us that neocons are not just old, white men.

I agree with you Larry, Obama is missing it. Andy and the prsident should widen their reading and consult with a wider variety of experts.

Come on guys! No one should ever expect to get everything.

I don't think you understand how politics work.

Infact, you sound like you are on the Repub side.

Larry and Cedric either do not understand how our government works or they are Republicans who do not realize their views have been rejected big time.

No one on either side of the argument ever mentions the huge number of retired senior citizens who are suffering financially because the interest rates on CD's and other saving products are about one percent or less. Their principle is dwindling fast because that needed income is not there and there are no other safe investments for people in that age group. No promise of an eventual improvement either.

Obama has not helped this group of people or even showed concern.

What a wonderful day to be a Dem! I have waited 30 years for this day.

Anon 10:06----its YOUR fault for thinking and expecting him to care. Politicians dont give a rats ASS about you----AT ALL. Why people even still vote is a big mystery. Why do we keep doing the same thing over and over (electing these rich pricks) and expecting them to care??? Its OUR fault.

Neah, spending less can be a rational decision regardless, to minimize risk. What the positive regard towards Obama really indicates is that people aren’t going to panic on account of undergoing the hardships.

Another segment of the population in danger are the auto workers and other union retirees who are facing possibly losing over half of their retirement income because of the finances of their employer. How can that be? They worked for thirty-years plus and negotiated for pensions at the expense of salary increases and the agreements were legal. So, now it seems they will lose while the bankers walked away with bonuses big enough to pay the pensions for most of the retirees. This is America. We cannot declare some contracts/agreements to legal and must be kept for one group of American workers and others are not and they can lose half their income. Outrageious.

Larry writes: - Illegal warrantless surveillance and wiretapping of American citizens has continued under Obama.Provide example please. A single case would be enough.

Larry writes: - Top Bush administration officials who ordered torture and those that carried it out have been protected from prosecution under Obama.Bullshit. He merely points out that it's not his job, and correctly refers the prosecution to the determination of the Attorney General. He's president, remember?

Her's a helpful hint, Sonny: Do you think that documentation of torture would have been made public under a McCain presidency, as it has under the Obama presidency? Don't bother to answer, you've told enough lies already.

Larry writes: - Top Bush administration officials who deceived America into a war have been protected from prosecution under Obama.Again, bullshit. Same reason as cited above.

Larry writes: - The expansion of the military empire through continued occupation of Iraq and Afghanistan and further military incursions into Pakistan have continued and expanded under Obama.Military Empire? Are you serious? Obama is still committed to evac from Iraq, and Afghanistan, and shutdown of Guantanamo and other "black sites", and these objectives proceed apace. These things take time, obviously and I find it difficult to believe that you could be so obtuse about this. Is it intentional? You're either dishonest or stupid to believe that all of this can happen within a month or two. Personally, I'd like to believe that you are simply dishonest, but I'm beginning to believe I'm being far too kind.

Larry writes: - Banker bailouts, reckless spending, inflation of currency through overprinting and global regulations stifling the free market, all of which were initiated under Bush, have continued under Obama.Okay, I am being too kind. "Overprinting of currency"? "Global regulations stifling the free market"? Jesus, what gibberish. Suggest an alternative to "banker bailouts". In fact I insist. Right, why'd I ask. "Overprinting of currency", LOL

Larry writes: The militarization of the United States and the architecture of the police state that was set up under Bush has been preserved and expanded under Obama.- The attack on the second amendment right to bear arms has continued under Obama.Again, examples? Right, why'd I ask. Don't forget to stock up on ammo for the coming race war, Larry! I'd say that you're pulling this out of your ass, Larry, but you and I both know better; you're pulling this out of the steady fact-free diet of racist websites you're subsisting on currently.