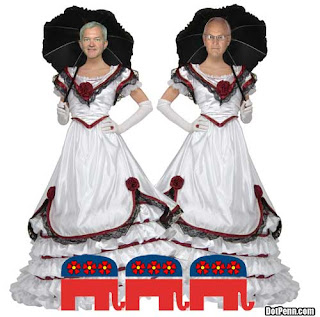 Last week Iowa's State Supreme Court ruled that a ban on same-sex marriage was unconstitutional, paving the way for gays and lesbians to legally marry. It's been hailed across the country as a bold, landmark measure that could ripple throughout other states.

Of course, the ruling has caused outrage and protest among conservatives, those god-fearing upholders of the great institution of heterosexual marriage. And in response to the Iowa Court's action, the state's House Republicans are vowing to pass a constitutional amendment banning gay marriage, and threatening major political consequence to opposing Democrats (who just happen to control both the House and State Senate).

But before these narrow-minded, sanctimonious hypocrites go off full-cocked (pun intended) to amend the state's Constitution, perhaps they'd accept a little challenge. How about taking lie detector tests in which three key questions are asked:

1. Have you ever cheated on your spouse?

2. Have you cheated on your spouse more than once?

3. Have you ever engaged in homosexual activity?

Since the primary justification (and fear) behind banning gay marriage is that it threatens the sanctity of heterosexual unions, I believe we have a right to know how many straight and closeted gay Republican philanderers--along the likes of Bob Barr, Newt Gingrich, David Vitter, Vito Fossella, Larry Craig and Mark Foley--there are in Iowa's chambers before we allow them to pass judgement, and law, on others' morals.

In fact, let's roll the dice and make a bet with these right wing frauds: if, as expected, more than 25% of them fail the lie-detector test not only is the court's ruling upheld, but this issue is put to bed (pun intended) in Iowa forever. If not, they get to keep fighting for their constitutional amendment. On one thing everyone can agree: it'd be pretty hard to "protect" the sanctity of an "institution" that at least 25% of them piss on every day.

So c'mon, Iowa Republicans, are you ready to prove that you practice what you preach? We won't hold our breath.....
Posted by The Ostroy Report at 6:16 PM

The argument that same gender marriage threatens the sanctity of heterosexual marriage is ridiculous. While arrogance and sanctimonious righteousness on display are an act, the hypocrisy and intolerance of equal rights are not.

While a shift in cultural attitudes is underway, the GOP is fighting hard to keep the status quo still battling ideological culture wars that don't exist, at least not like they once did.

They are in absolute denial that America is changing:

In part, the shifting attitudes -- albeit slow -- toward the gay community was facilitated by the TV series "Will and Grace." The show helped ease people's fears, despite the decades of dehumanizing, demonizing and fear mongering.

Certainly homophobia still exists, but it is an equal rights issue that outweighs ideological certitude.

Furthermore if conservatives expect to be taken seriously they need to walk their talk and stop being hypocrites. With the many, many more important pressing issues haunting people's thoughts, mythical irrational fears are the least of their worries.

The status quo is changing and there is nothing they can do about it except change along with the rest of the world. Otherwise they'll be left behind.


Either way the sanctity of marriage will survive.

A message to Larry: With comment moderation back, no one on this blog sees your postings. Plus, my assistant now oversees the moderating, so I only read what gets through her. Unless you're posting something civil and on topic, she rejects everything you write....and I never see it. You're truly wasting what appears to be an awful lot of time.
Andy

well it seems to me that one big danger to marriage is divorce.. so how about if the amendment also prohibits divorce? Rush are you reading this??