Ann Coulter Needs to Shut the F**K Up (...and Other Random Thoughts) 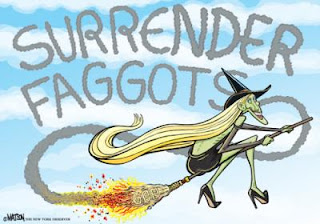 It's time. Once and for all, Ann Coulter needs to shut her trap and simply disappear. For when she opens her mouth, nothing but outlandish, irresponsible, incendiary projectile vomit spews forth. She's a one-woman broadcast cesspool with a maniacal cackle and obnoxious permanent smirk. A vile, bigoted, narrow-minded, hate-filled, mocking, rabble-rousing contemptible miscreant who's infinitely more anti-American than any of the alleged "radicals" who reap her psychotic wrath. Her idea of patriotism is to incessantly trash our new president and commander-in-chief on his military leadership during wartime. Her idea of being a "great American" (a label staunch conservatives like Coulter, Sean Hannity and Rush Limbaugh bestow on each other) is to proudly wear her homophobia and racial and religious intolerance on her sleeve like a badge of honor. Some say she's really smart and it's all just a big ruse to sell books and make money. I say she's evil personified regardless, and a danger to society. Yes, a danger, because there's a legion of massively uninformed, highly-impressionable folks out there all too eager to hang onto her mean-spirited lies, misinformation and character assassinations as if they were the truth.

JOE BIDEN, GEORGE BUSH AND KARL ROVE
Vice President Joe Biden, in boasting of President Barack Obama's recent 8-day overseas diplomatic trip, suggested to Fox News' Megyn Kelly that former President Bush was not an effective commander-in-chief: ...."I remember President Bush saying to me one time in the Oval Office...Joe, he said, I'm a leader. And I said, Mr. President, turn around and look behind you. No one's following. People are beginning to follow the United States again as a consequence of our administration."

And that little anecdote got the panties of that Republican arbiter of truth, Karl Rove, in a snit: "I hate to say it, but he's a serial exaggerator. If I was being unkind, I'd say he's a liar." We should all take what Rove says quite seriously, as exaggeration and lies is his specialty.

"PIRATES" HOLD AMERICAN HOSTAGE
A serious melodrama is unfolding off the coast of Somalia as Capt. Richard Phillips is being held captive on a boat. But can we please stop referring to the armed Somalis who've kidnapped him as "pirates?" This term conjures up Johnny Depp-like images of swashbuckling charmers with eye-patches shouting "Aye, Matey, where's the whiskey?! Arggggg!" Let's call them what they really are: vicious blood-thirsty terrorists.

IRAQ: MISSION ACCOMPLISHED?
Five American soldiers were killed in Iraq Friday in a suicide-bomb attack in the northern city of Mosul, the deadliest attack against U.S. troops in over a year. The increase in deadly violence threatens the June deadline for withdrawal of American combat troops from cities, part of a U.S-Iraqi agreement which took effect this year. The top U.S. commander, Gen. Raymond Odierno, warned this week that we could instead see an increase in U.S. troops in Mosul and Baqubah, and expressed concerns about the escalation in Sunni-militant-led violence among Arabs and Kurds in the north. He also cited the "very dangerous" threat from Iranian-funded militants. Given that we can't fully pull out our troops for at least another 16 months and the odds are, as the good General says, we'll have to increase our troop strength shortly in some major northern cities, it's unbelievable how the Republicans and Bush apologists still get away with their claims of success for the surge and for the war itself. Any idiot can see how fragile Iraq's Democracy is, and that without our troops, the country will likely fall like a house of cards.

Andy - when are you taking this show on the Twitter road?

Larry, the reason your posts are consistently deleted is because you never offer anything constructive. Your posts are nothing but anger-filled attacks designed to antagonize and be combative. It has nothing to do with whether or not I agree with what you have to say. The problem is, you have nothing to say and you make no points. So as long as you choose to be a rabble-rouser rather than someone who offers either complimentary points or constructive opposing views, you will continue to be censored. Your idea and my idea of Free Speech is quite different. This board does not exist for you to do or say anything you want. That's what your blog is for.

This is the last time I will attempt to explain why your comments are deleted.

Andy writes: can we please stop referring to the armed Somalis who've kidnapped him as "pirates?" This term conjures up Johnny Depp-like images of swashbuckling charmers with eye-patches shouting "Aye, Matey, where's the whiskey?! Arggggg!" Let's call them what they really are: vicious blood-thirsty terrorists.

Well, they don't want blood; they want money, and the crime they are committing is well-defined in maritime law. As-- wait for it-- "Piracy". If we're going to call them what they are, we'd best stick with "pirates", despite Depp's popular characterization of Captain Jack Sparrow.

It's especially true now, when the "terrorism" tag has come to imply an act of destruction usually in the service of some cause or another, and despite the recent claims by members of the British Government that the Somali Pirates are some sort of Al Qaeda Auxillary, this doesn't seem to be what these Somali renegades are about.

And lastly, I believe the tipple of choice of the eye patch 'n' parrot crowd is rum, not whiskey, arrrrrrr. :-)

Chris beat me to it - I think there is a clear line between terrorist what terrorists hope to accomplish and what piracy is, even when similar tactics are employed. The Somali pirates appear to have no other agenda than theft.

It reminds me of the push a few years ago to stop referring to "suicide bombers" as such, and instead call them "homicide bombers" because it was calling attention to their true crimes, or something like that. Forgetting, of course, that Timothy McVeigh and Ted Kosinski seemed to both qualify as homicide bombers without the "killing onself in the process" aspect.

Robbing criminal acts of their descriptive specificity gives neither justice nor our language any help.

Andy says, "Let's call them what they [the pirates] really are: vicious blood-thirsty terrorists. " I disagree because it is an inaccurate description. Iam not condoning their actions, but absent historical background the story lacks the proper context.

First of all the pirates are Somalian fisherman who are taking the crews hostage, not killing them. Second Somalia has had no government for essentially twenty years. Third the piracy problem emerged 10 - 15 years ago in response to dissuade the dumping of toxic chemicals and foreign fishing trawlers. Fourth piracy is a lucrative business.

In 1991 Somalia's government collapsed. At that point without authourity European ships began dumping millions of barrels of toxic waste off the Somalia coastline. Shortly following the 2005 tsunami hundreds of barrels washed up on shore leaking toxic and nuclear waste that caused the deaths of over 300 Somalians.

Somalians used to be fishermen. But then trawlers from Korea and Taiwan stripped their waters of tuna, shrimp and lobster worth over $300 million a year. With the Somalian fishing industry virtually non-existent 9-million are teetering on stravation.

Somalia is a sovereign nation, too weak to protect itself. So when the West refuses to enforce maritime conventions, but protects foreign oil tankers and cargo ships instead it is wildly unrealistic to expect starving Somalians to passively stand-by as toxic waste is dumped into their waters and trawlers steal their main source of food and livelihood.

Without a functioning economy young men and ex-fisherman, who have no hope for a future, turn to piracy.

"Piracy is an excellent business model if you operate from an impoverished, lawless place like Somalia," says Patrick Cullen, a security expert at the London School of Economics who has been researching piracy. "The risk-reward ratio is just huge."

Both terrorism and piracy are criminal acts and both are used as a means to an ends. Piracy is a lucrative business, terrorism isn't. Terrorists kill individuals to terrorize a large number of people, whereas Somali pirates are taking over ships in exchange for money.

That is the context this should be viewed.

Thanks for that, Serena, and as a last add, the resonances with the pirate of Jack Sparrow's day are brought into sharp relief.

Just as the somali pirates began as the "Volunteer National Coast Guard", seeking to chase off or at least collect some, uh, taxes, yeah that's the ticket from interloping ships overfishing and dumping in somali waters, the 18th century varietal first fought for "queen and country" but soon narrowed their interest to "me and mine".

There's no moral justification for what the somali renegades are doing, especially inasmuch as they have hijacked not a trawler or a waste dumper but a shipping freighter, protected in somali waters by international maritime law, and don't even get me started on the "World Food Programme" freighter raids, but, as you say, it's impossible to fairly view the scalawags without the backstory.

Best Coulter Rant I've read yet. My only complaint is that it wasn't nearly long enough.

Bad enough her hate filled rants but to think that she is given such prominence inspite of her continual distortion of the facts tell me that the Republican party has become more of a cult than a rational party.