A Message to America's Homophobes: No One Really Gives a S**t Anymore if Gays Get Married! 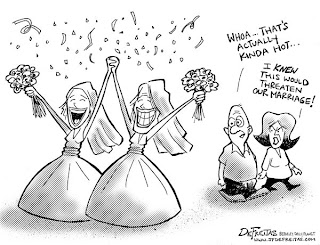 State legislatures have been passing gay-marriage bills left and right over the past few months. Maine, New Hampshire, Vermont, Connecticut, Massachusetts and Iowa have all moved to allow gay couples to engage in the same revered institution normally reserved for such upstanding heterosexuals as OJ Simpson (murderer), Joey Buttafucco (hired a murderer, albeit a sloppy one) and Peter Cook (Christie Brinkley's uber-philandering ex). Other states like New Jersey and New York are also considering similar bills.

In New York this week, as the State Assembly voted to legalize gay-marriage, Brooklyn Assemblyman Dov Hikind, a staunch opponent of the measure, frustratingly wondered where the opposition was hiding: "Wake up! Where are you? "It’s the bottom of the ninth, two outs, and you’re losing — big time."

Now let me be the first to acknowledge and appreciate the unintentional appropriateness of Hikind's analogy involving a game men play where balls and long phallic-looking objects are grabbed and passed around for hours. But more important, the answer to Hikind's question, "Where are you?" is simple: people are too busy worrying about their jobs, their incomes, their savings, their homes and whether or not they'll have adequate health care. They're also worrying about the effect the prolonged recession is having on the crime rates in New York and other cities across America. In short, what two gay dudes or lesbians do to commit to each other is just not an issue anymore to most thinking people. It's just a matter of time before the entire nation--with the exception of a few small, densely populated narrow-minded die-hard bastions of homophobia--accepts and legalizes same-sex marriage and finally puts this issue to bed (pun intended).
Posted by The Ostroy Report at 7:45 AM

If you start allowing GOP wedge issues to be accepted by moderates, you don't know where it'll end: Karl Rove could marry a dog.

Right on Andy! Wow, two blogs in two weeks that I almost totally agree with. Way to go! ;)

I would like to know what the difference is between a legal civil union and a marriage. Is it just that a religious person blesses the union?

This is how much I love you & your blog: If I was straight, I would marry YOU- (and I probably won't marry anyone, so that's saying a LOT).