Nancy Pelosi and the Republican Orgasmathon 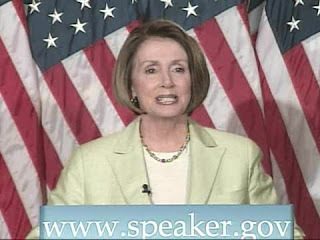 It had to happen. It was just a matter of time before someone, somewhere in the Democratic party would trip up and provide the GOP with the kind of controversial fodder they've been fantasizing about. And to Republicans, the Nancy Pelosi saga this week is the stuff partisan dreams are made of.

Seems House Speaker Nancy Pelosi can't remember being briefed by the CIA back in the Fall of 2002 about the specific use of torture on terror suspects in U.S. custody, in particular the technique known as waterboarding. Yeah, she remembers meeting with the spy agency, but claims waterboarding never came up. The issue here is that Pelosi's been very critical of the Bush administration's use of the illegal torture tactic, so it's important to know if in fact she knew it was taking place and when. Adding to the complexity of this mess is the fact that she's admitted to knowing about it through briefings just 6 months later, but kept quiet because she felt "powerless" being in the Democratic minority at that time. That is perhaps the most lame excuse since "the dog ate my homework."

I'm no fan of Pelosi. I think she's terrible as the face of House Democrats. She's shrill, combative and speaks like a teenager trying to explain why she's late for class. There are some people who project sincerity and integrity, but Pelosi's just the opposite. She comes across as a duplicitous partisan hack. A female Tom Delay, yet lacking the gravitas and efficiency. Whereas Delay was ruthless and resolute, Pelosi's simply an ineffective trainwreck. If she's found to be lying about what the CIA told her and when--current and former CIA Directors Leon Panetta and Porter Goss respectively claim she in fact was briefed in 2002 about the waterboarding of terrorist suspect Abu Zubaydah--then she should be prosecuted along with Bush, former VP Dick Cheney and everyone else who authorized the use of illegal torture tactics.

But let me stop being the objective Democrat for a second and acknowledge the orgasmic excitement rippling through the Republican Party right now over the Pelosi saga, which right-wing radio and TV host Sean Hannity said is "blossoming into a Watergate like cover up and scandal." On his radio program, a near-hyperventilating Hannity repeats the mantra "what did she know and when did she know it" every three minutes, literally.

Really Sean? Watergate? That Pelosi may have lied about being briefed on the illegal torture tactics being used by the opposing party which then-controlled the White House, Congress and the Supreme Court is of the same scale and magnitude as the President of the United States authorizing a burglary of the opposing party's headquarters in an effort to rig a presidential election and then covering-up this illegal act? You see Sean, this is why no one takes Republicans seriously, and why you guys can't get elected anymore.

Former House Speaker Newt Gingrich has moved front and center in his harsh criticism of Pelosi:

"I think this is the most despicable, dishonest and vicious political effort I've seen in my lifetime...I think Speaker Pelosi's in enormous trouble. I think that lying to the country on national security matters and lying to the House is a very, very dangerous thing to have done."

And if it's one thing Gingrich is an expert on it's lying. Just ask his first wife, on whom he cheated while she lay suffering from cancer. What's more "despicable, dishonest and vicious" than that? But when it comes to politics, Gingrich, like many other high-ranking Republicans, suffers from selective memory and blatant double-standards.

Note to Newt: Bush and Cheney lied to America for eight years about national security matters, and perpetrated countless war crimes, and have yet to be punished. Wanna talk about what's truly dangerous? How about lying about WMD and terrorist connections so you can justify invading Iraq, which has resulted in 4300 U.S. troop deaths and tens of thousands of other fatalities, not to mention the hundreds of thousands maimed and wounded. Where's your self-righteous outrage on all that, Newt? Spare us the sanctimony. And be careful what you wish for. Just as the unprecedented personal war you and your band of 1990's 'revolutionaries' waged on Bill Clinton forever changed the tenor of politics and backfired massively on Republicans, so too shall the Pelosi Crucifixion.

It's actually fun to watch and listen as Republicans sink their teeth into the Pelosi scandal. They're a beaten, battered, disenchanted, delusional lot who see Pelosi's foot-in-mouth disease as their ticket back to power. As if the alleged actions of one Democrat is enough to bring down the entire party in the 2010 midterms. Forget the fact that, even if it's true that she lied, who gives a shit? is this really a story? Again, if she lied, she should be punished. And if the Obama administration eventually prosecutes those who knew of and/or authorized illegal torture tactics, then she too should be prosecuted. But the bigger story here, the real story, for Pete's-sake, is how these blood-thirsty Republicans seem to be forgetting just what the hell Pelosi may have been lying about in the first place.

While right-wing stooges like Gingrich, Minority Leader John Boehner and Hannity would love to divert all the attention onto Pelosi, the real scandal isn't about what she knew, but whether a United States president, vice president and their legal advisors cooked the books so that America could commit illegal acts of torture. What these disingenuous Republicans need to understand, through their shouts of "prosecute Pelosi," is that if she goes down, so do Bush, Cheney and the rest of the torture-mongers who conceived of and perpetrated these "enhanced interrogation techniques." Pelosi's crime, one of stupidity perhaps, pales by comparison.
Posted by The Ostroy Report at 11:54 AM

STOP! The Attacks On Speaker Pelosi

Now Republicans are trying to attack her about allegedly having been told by the Bush administration about things she was not told about, like water boarding. Republicans are attacking her because she is being so effective at getting the peoples work done in congress, like healthcare. And Republicans want to stop her. Don't put up with that. Every time they attack Speaker Pelosi they are attacking you and the rest of the American people. If they go after her, go after them even harder.

If you will remember, their was a mass exodus of senior CIA officials after Porter Goss took over. And the complaint at the time was that longtime, highly experienced agents were being replaced by other people based mostly on their political loyalties to the Bush administration and their extreme right-wing ideologies. Which is just exactly what you need if you want people who will be willing to break the law under orders. Sound familiar? I don't think you can trust any CIA records after Goss took over.

I have nothing but the utmost respect, and admiration for the dedicated and patriotic members of OUR! Central Intelligence Agency. When the Bush administration betrayed one of OUR! agents (Mrs. Wilson) it made me boiling MAD! I think our new Director Pennetta has got some internal investigation and agency house cleaning to do. If you backtrack on the individuals that have been making the false attacks on Speaker Pelosi, and trace who they have had contact and conversations with, you should be able to connect the dots and catch your conspirators.

The key that the CIA records are falsified is Sen. Bob Graham and his journal, and common sense. :-) By the way, I think Mr. Pennetta is an excellent choice to head the CIA and fix it.

They are trying to kill healthcare reform. And continue our healthcare crisis. Don't put up with that.

To The Congress Of The United States:

If it is true that you are not allowed to have or make any permanent records of your intelligence briefings for later clarifications, and protection, that is ridiculous. That leaves all of you vulnerable to just this type of scam that is being perpetrated on Speaker Pelosi. So here is what you can do about it to protect your-selves in the future.

Members should be able to make notes and other recordings of these briefings. Then these briefings and recordings can be reduced to a computer file that can then be encrypted and digitally signed with a detached digital signature using key encryption. Then each of you can encrypt, and sign each others copy of the record that can only be unlocked with the other parties key. And both parties copies can be verified with each others copy of the files detached digital signature.

Very easy. Very secure. No more exposure to falsified records down the road. :-)

You see, it almost doesn't really matter what CIA allegedly did or didn't tell Speaker Pelosi, and congress. Because the briefing format is so deficient of any checks, balances, or verification that all we know is that all external briefing accounts support Speaker Pelosi's version of events. Pelosi and congress should have been given every benefit of the doubt. And that should have been it.

There are many other booby traps out there set for you congress. Be careful.

p.s. I still think the timing of Sen. Bob Graham's ruptured cerebral aneurism was suspicious. More so now, than before.

This is a most curious scandal. Her initial remarks struck me as being abusive towards the CIA in an entirely uncalled-for way. Her most recent 'explanations' seem to be walking back from that. As long as we are clear that this is not going to be about heaping the sins of Bush onto the long-suffering staff at CIA, then I see nothing but bad for Republicans (ie, good for the country) coming out of this. If this takes Pelosi down too, so much the better.