"Please Remove Your Jackets, Sweaters and Pants, and Place All Laptops and Electronics...." 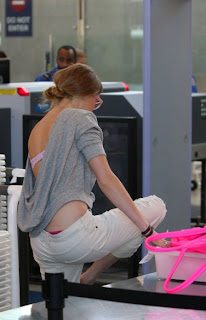 There was a time when airilne travelers could leisurely approach the security checkpoints at airports, drop their bags on the conveyor belt, and stroll through the x-ray machine without much fanfare. Ah, the good old days....

Then the horrific 9/11 attacks occurred and the rest is history. Coats, sweaters, shoes and belts had to be stripped off--babies and blue-haired old ladies included--and toiletries needed to be placed in clear separate bags and in a bin, along with laptops and other electronics. By the time you'd get to the other side you needed a scotch, a massage and a nap. But after eight years of getting used to these frustrating, time-consuming and often humiliating safeguards we thought, it can't get any worse, right? Ah, the good old days...

Well guess again. On Friday a Nigerian terrorist with possible al Qaeda ties attempted to blow up an Amsterdam-to-Detroit Northwest Airlines jet as it descended for landing. In what was initially thought to be firecrackers, Abdul Farouk Abdulmutallab, 23, ignited an incendiary device which, thankfully, failed to fully detonate and instead inflicted severe burns on his body. And how did he manage to get the device on board? By taping explosive powder to his leg and mixing it with chemicals contained in a syringe.

So what does this mean in the future for U.S. airline passengers? Will the Department of Homeland Security now require that we remove our pants too, leaving us standing there even more humiliated in our underwear and tees? Or will we be forced to wear clear plastic pants and shirts and expose ourselves much the same we do our toothpaste and shampoo? Just when you thought it couldn't get any worse...


On another note, we could use your help at The The Adrienne Shelly Foundation. We're a 501 c 3 tax-exempt, non-profit organization dedicated in my late wife's honor, and with a simple mission: supporting women filmmakers. Adrienne, who wrote, directed and starred in the hit film WAITRESS, was killed November 1, 2006. Through the Foundation, her commitment to filmmaking lives on. We've established scholarships, grants, finishing funds, screenwriting fellowships and living stipends at NYU's Tisch School of the Arts/Kanbar Institute of Film; Columbia University; American Film Institute; Women in Film; IFP; the Nantucket Film Festival; the Tribeca Film Institute; and the Sundance Institute. Your generous contribution will go a long way towards helping us achieve this very important mission. Please click here to make a donation. Thank you.
Posted by The Ostroy Report at 11:44 AM

I have a better idea. Why don't we, the United States, stop giving them reasons to commit acts of terrorism against us?

They don't "hate our freedoms".

They hate our freedom to arrogantly do whatever the hell we want with impunity by propping up brutal regimes, and by committing immoral, illegal, imperialist, genocidal acts of state sponsored terrorism.

I smell a rat!

This man's own father had warned American authorities months ago about his son's increasing radicalism and was quoted as being surprised that his son was allowed to fly to the US. Was this incident allowed to happen so that the public would once again form the lines of compliance for an out-of-control authoritarianism?

The only realistic answer to this - and, yes, it is grossly inconvenient - is to never fly again. I don't intend to.

Too many people are flying too many times. A map of the United States showing the routes and usage of one day's flights will bring this into focus. Flying jets is incredibly unfriendly to the environment. The fact that security measures to counter terrorism has caused some people to think "do I really need to go to Aspen this weekend?" Or "Is that shopping trip to New Delhi really necessary?" is fine with me.

Here is my suggestion; allow each citizen "X" amount of flight chits per year. Allow those people who don't fly much ( working poor, poor, nervous Nellies, etc.) to sell their chits on the open market to those who want or need to fly more.

Results;
1. Less flights per day so less pollution of our air and water and land.
2. Less crowding at airports so as increasingly tight security measures are put in place overall delay for passengers is minimized.
3. Some people who need some money and don't go to Aspen or New Delhi or Paris can make a few bucks.

We really can't all have all we want all the time with no cost.

I am sure none who died on 9/11 or those who were targeted this week are people who "do whatever the hell we/(they) want" to hurt Mmslims. Next they'll start bombing orghanages and playgrouds if they realoy want to kill innocent people.

And yes, we'll take off our pants if that's what it takes to save innocent lives.

I have a vision: it won't take long when we'll go through security completely naked. Wouldn't that be fun?

They hate our freedoms.

How many foiled terror acts do we need for Cheney to come on TV and say that Obama hasn't ruined America?

So where is your proof that they actually hate our freedoms?

I made the point that they actually hate our freedom to participate in state sponsored terrorism (which by the way includes bombing wedding parties and polluting the landscape with WMD depleted uranium radiation that is causing thousands of birth defects) so we can steal their natural resources.

Imperialism, genocide, torture and terrorism are all American traditions since 1492!

As one who flies long distances at least 2x/year, often internationally, I must say that I have no problem with added security and scrutiny - with this simple caveat: TREAT WITH CARE.
I travel with many thousands of dollars worth of equipment (there is no avoiding this, and I barely have room for a change of clothes), without which the entire trip is moot, so sure, inspect but Dear God, PLEASE don't dump it all out and screw it all up, sometimes even neglecting to redo the latches on the case!

I don't mind the ectra hour I have to spend in the terminal for these things, I budget my schedule for just that, but if you break or lose one tiny piece of my gear - there goes the whole $10k+ that went into the trip.
Thanks a lot, TSA, way to prove your "worth".