So What's Next for Airline Passengers, Adult Diapers? 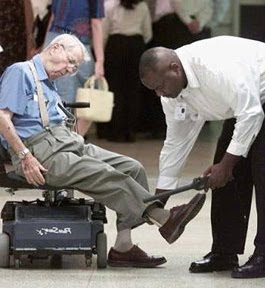 In the wake of the attempted terrorist attack aboard a Detroit-bound Northwest flight from Amsterdam last week, the Transportation Security Administration has outlined new measures for air travel, including requiring all passengers to remain in their seats for the last hour of the flight. I find this especially troubling, as I have the bladder of a 5-year-old and typically make more trips to the airplane's lavatory than a bleacher bum at Yankee Stadium. And when ya gotta go, ya gotta go...

I'm not exactly sure who makes the "Depends" brand adult diapers, but now might be a great time to buy their stock, for I'm sure I'm not the only traveller contemplating slipping one on for extra peace of mind. I'm not joking. Just consider for a moment all those flights you've had where, just as you thought you were about to land, the pilot announces several rounds of "circling" due to inclement weather, ground traffic or unavailable gates. Startin' to squirm already, aren't ya. Under these situations the "I-ain't-gonna-get-to-pee-for-an-hour" rule turns into something much more problematic. Especially to those of you who like your 30,000 foot hops and barleys. Imagine a whole plane-full of cranky, belligerent grown-ups whining about how badly they have to pee. Or even worse (if ya know what I mean...).

And if that wasn't enough, we won't be able to have personal items in our laps during this last hour either. No laptops? No iPods? Books? Magazines? Portable DVD player? Seriously, if I have to fly with my 6-year-old without the DVD player, well, I ain't flying. I often say Bill Gates, Jonas Salk and the Wright Brothers have nothing on the person who invented that thing. So, now what we do for the last hour, talk the person next to us? You mean we actually have to engage them now in idle chit chat as our bladders are about to explode like water balloons tossed off a roof? Train travel is starting to get infinitely more appealing.

To be sure, there's gotta be a better way of keeping our citizens safe from terrorists and their attempts to blow shit up. (By the way, these Muslim extremist virgin-seekers aren't exactly the brightest bulbs in the Jihad. Between shoe-bomber Richard Reid and Thursday's genius Umar Farouk Abdulmutallab (who had the highly explosive substance PETN taped to his leg), these guys are so inept they often can't seem to blow up anything but themselves. And the guys who actually did cause catastrophic death and disaster--the 9/11 attackers--likely wouldn't have succeeded either with their highly sophisticated box-cutters had it not been for an America and an airline industry that was asleep at the wheel). How about spending more time and money screening the bastards who are actually trying to kill us and leave the 2-year-olds and blue-haired grannies alone? I swear, if I see one more 90-year-old being frisked like Khalid Sheikh Mohammed I think I'm gonna scream. Especially when monsters like Abdulmutallab, who are on government watchlists for being known or suspected terrorists, are not pulled out of the security lines, subjected to thorough searches and interrogations, and yanked off flights.

One thing's certain: we need to stop being so damned politically correct in this country and stop wasting time on old white people and little kids just so we can't be accused of racial profiling. America can learn a lesson from the Israelis, who only care about keeping its citizens safe, even if they have to hurt a few feelings in the process.


On another note, we could use your help at The The Adrienne Shelly Foundation. We're a 501 c 3 tax-exempt, non-profit organization dedicated in my late wife's honor, and with a simple mission: supporting women filmmakers. Adrienne, who wrote, directed and starred in the hit film WAITRESS, was killed November 1, 2006. Through the Foundation, her commitment to filmmaking lives on. We've established scholarships, grants, finishing funds, screenwriting fellowships and living stipends at NYU's Tisch School of the Arts/Kanbar Institute of Film; Columbia University; American Film Institute; Women in Film; IFP; the Nantucket Film Festival; the Tribeca Film Institute; and the Sundance Institute. Your generous contribution will go a long way towards helping us achieve this very important mission. Please click here to make a donation. Thank you.
Posted by The Ostroy Report at 2:54 PM

Andy,
After contemplating "these guys" who "are so inept they often can't seem to blow up anything but themselves", isn't it worth reconsidering the odds that these same geniuses that aren't exactly the brightest bulbs in the Jihad actually pulled off the 9/11 attack "with their highly sophisticated box-cutters"? Something that complex, three simultanious hijackings and two perfect hits that taking down two steel structured buildings, seems less and less likely every year as the evidence piles up.

@teknilAl-Are you suggesting the United States did Sept 11?Are you a truther?
Did you ever bother reading ANYTHING about these people and the planning of Sept 11?Ever hear of QTUB and the beginning of these movement?
You're a moron.
Andy,what is your problem?You have posted these anti-American,put the blame on America first reponses to your last 2 postings.That,my radical far left ideolgical creep is the problem.Making believe these murders arent really a threat and the fault lies on America first.
Thats thought process is a threat to our lives.A death sentence...As said before-We have to be right all the time.The terrorist has to be right once.

At last: Being "politically correct" is not smart and not safe.

Tell me, who are the terrorists again? I stopped watching the MSM gnus and the propaganda spell has worn off.

They don't "hate our freedoms".

They hate our freedom to arrogantly do whatever the hell we want with impunity by propping up brutal regimes, and by committing immoral, illegal, imperialist, genocidal acts of state sponsored terrorism.

Of course 9/11 was an inside job. The evidence is overwhelming!

Meanwhile, now that the Supreme Court, by refusing to hear a case last week, has ruled that 'enemy combatants' are non-people without any rights whatsoever, anyone can be designated as such by the president and immediately lose all of their Constitutional rights.

We are literally one law away (the one passed in 2007 by the House, but not by the Senate, that can designate anyone a domestic terrorist for speaking out against the government) from becoming just as repressed as 1933 Germany.

Sticking with the original topic (not that I disagree with teknikAL's supplemental one), there is only one way that the security arrangements will ever change. That will happen when enough of us refuse to fly because of these ridiculous regulations; odious obligations which appear to be more an exercise in imposed governmental intrusion into one's daily life and authoritarian terrorism more than they do to actually capture a potential terrorist. If more people were to refuse to fly, and to let it be known that this faulty and fraudulent system is why, the airlines would fly to their pet Congress-critters and demand instant change.

And wasn't the timing of this latest incident special! A commentator on another blog pointed out that three major provisions of the Patriot Act are up for extension as soon as the Congress returns from their latest bribery junkets. What better way to get them passed without a lot of debate than to allow this to happen - especially since the father of the perpetrator provided all of the necessary information to PREVENT this from happening in the first place?

Frighten the sheeple and slip through some more corporatist fascism. Works every time!

thanks for god sites and for god job thanks

Realist, you are quite right.

Isn't it odd that when they try to take out a couple hundred Americans with a home made bomb, they are called radical, fanatic terrorists. Yet when we bomb the Hell out of Iraq with depleted uranium WMDs to steal their oil, we are called freedom fighters.

Terrorism is in the eye of the beholder, if he still has an eye, or a head, or a body.

We have met the most dangerous terrorists in the world, and they are U.S.!

Anonymous at 9:47 AM, not that I think that you will respond as you are likely a drive by troll; I mentioned nothing about the US being to blame, yet that was your first thought.
If a proper law enforcement investigation was done, with forensic analysis of the evidence using the scientific method without all the shell games and secrecy as did happen, maybe there would be no questions. Private citizens have done a great deal of valid investigation that remains standing even when peer reviewed in the scientific community. Eyewitnesses called heroes one day are dismissed as nuts when they tell their stories.
As it stands, not much matches up with the government story, and many witnesses will tell you the truth, off the record, due to harassment, verbally by people like yourself and much worse, with threats to their lives from those who stand to lose the most. Unfortunately there are well financed entities within the government and in the private sector that stood to gain from these events on multiple fronts and this calls into question everything in the government narrative when logic is used to analyze the events and evidence.
There is plenty of historical documentation that show events like this have been planned in the past, and similar schemes executed.
While I won't place blame for the event on the government as an entity, there are plenty of ruthless people inside and out of the government that will do such things simply for the money, others for political gain, ideological beliefs or better yet: when all those interests intersect. Money and politics make strange bedfellows.
If you were ever really interested in stopping terror, actually ask a "terrorist" why... you won't because you won’t like the answer and because you have the mistaken belief that co-operation shows weakness. Their discontent, desperation and attempts at retaliation are easily co-opted to reach other ends and endanger the U.S. even more. If you were really interested in your "freedom" and not political ideology you would be concerned and ask relevant questions. Mr. Schmidt and Realist seem to be asking.... Here are a few of my own: What is the largest slice of U.S. budget? How can we get some? How do we get more?
Any business person knows how to identify a lucrative market, take advantage of it, then grow the demand. Simple free market economics applied to war and espionage.
Two word explanation: Iron Triangle.

BTW, if I am a "truther", does that mean everyone who isn't is a "lier"?
Absurd. The fleecing of the US continues...

Thank you for information