The Economy is Recovering, No Thanks to Republicans 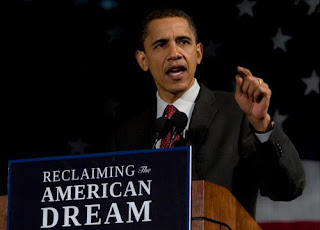 It's the Democrats' economy, stupid.

One year ago the United States economy was on the precipice of catastrophic meltdown. One year later America's financial system, while not thriving, is surely showing signs of surviving and climbing back from its abysmal state, with a broad range of economic indicators signaling the early stages of recovery. The economy is indeed turning, and it's done so with absolutely no assistance from Republicans, who've elected instead to take the calculated political risk of becoming the Party of No as the GOP plots its upcoming election strategy. Not surprisingly, not one Republican voted for President Obama's stimulus plan last Winter; just one voted for Health Care reform; and none voted for last Friday's financial reform bill. In short, they've marched in negative lockstep on every single piece of economic legislation this year, effectively dumping the economic crisis in the laps of Democrats, hoping to loudly lay blame in the event there's little or no improvement. I bet they even have the campaign ads already written. But given the economy's progress to-date and its likely future upward direction, "NO" is probably not the best strategy going into next year's mid-terms.

Ask any Republican leader such as House Minority Whip Eric Cantor (Va) why the voting is virtually 100% partisan and they'll offer up the standard talking points: Obama and the Democrats are raising taxes, exploding the deficit, over-regulating, stifling job creation and growth, and taking the economy in a direction that's harmful to American business and consumers. In short, they say, the President's economic plan simply isn't working.

But only a disingenuous Republican could view the downward trajectory from last January's 700,000job losses to November's 11,000 and deny the obvious progress and the job creation that's likely to soon follow. Furthermore, we've experienced GDP growth for the first time since Q2 2008; credit and borrowing has eased; businesses are optimistic; corporate earnings are up; inventories are down; orders are rising; November retail sales beat estimates; the housing market has rebounded; consumer confidence has risen appreciably; the stock market is up 50% since March; and Wall Street's about to hand out record bonuses.

Through all this, Republicans continue straight-faced to claim the stimulus plan hasn't worked, Obama's economic policies are a failure, and that the GOP has a better plan for America's economy. Unfortunately for them we've yet to see anything but NO. To be sure, the administration has pulled the nation back from the brink of financial disaster with absolutely no help from Republicans. It's the Democrats' economy, all right, and voters will probably remember that next November if they continue to see marked improvement, especially in the area of job growth. So much for the GOP's calculated risk?


On another note, we could use your help at The The Adrienne Shelly Foundation. We're a 501 c 3 tax-exempt, non-profit organization dedicated in my late wife's honor, and with a simple mission: supporting women filmmakers. Adrienne, who wrote, directed and starred in the hit film WAITRESS, was killed November 1, 2006. Through the Foundation, her commitment to filmmaking lives on. We've established scholarships, grants, finishing funds, screenwriting fellowships and living stipends at NYU's Tisch School of the Arts/Kanbar Institute of Film; Columbia University; American Film Institute; Women in Film; IFP; the Nantucket Film Festival; the Tribeca Film Institute; and the Sundance Institute. Your generous contribution will go a long way towards helping us achieve this very important mission. Please click here to make a donation. Thank you.
Posted by The Ostroy Report at 10:46 AM

I pray that jobs come back. I know they will not be as good as the thousands of jobs lost here in Michigan. Folks moved here (early 1900s) for good manufacturing jobs. Now we tell our young folks that they will have to move out of state just like in the past for work. Sad but true. Many young folks don't want to leave.

Internationally-focused Exxon must be buying US-based-and-sourced XTO for $31B because they are worried about rampant socialism, ridiculously high taxes, and the failure of the Obama administration.

I guess it's a matter of who you are and where you live. where I live unemployment is at twenty percent. House break-ins and robberies up to an all time high. Warnings about protecing yourself are the lead stories on the front page of the city paper. Financial need is blamed. Seniors will get no cost of living increase this year and are colleting no interest at all on their CD savings. Any stock is worthless. Social services have closed for lack of funds. Mental hospitals are closing for lack of funds so our loved ones will come home or roam the streets. Some people were hired at Wal-Mart but that was for the Christmas sales which account for some increase in spending, I guess. I am truly glad to hear from Ostroy that things are good for some Americans somewhere.

Anon 10:49...I'm sorry that you live in an area that is more economically depressed than other parts of the country. To be sure, there's many regions hit especially hard and having a much harder time recovering. But please understand that I am writing about the beginnings of an economic recovery based on several major leading indicators, not across-the-board prosperity in the U.S. Of course areas like yours will continue to be challenged...and what happens in your area is a tremendous hardship for those who live there. But it does not negate the clear progress the economy is making overall.

Without jobs that will enable folks to provide the basics, there is no recovery. Where are the jobs? Folks here in Michigan will move there.

Anon 12:03....the monthly figures for job losses have steadily, and precipitously, dropped from over 700,000 last January to just 11,000 in November. C'mon, we need to have some patience here and accept that job creation isn't going to happen overnight. But, dropping from 700,000to 11,000 certainly is a safe bet that we're simply a matter of a few short months perhaps--maybe less--from seeing positive job growth numbers. You have to agree that all signs point to jobs being created very soon, no? Give Obama some credit. He walked into an economic shitstorm not seen since the Great Depression. And, more jobs were lost under Bush than under any president since the Depression. So, does Obama get more than 11 months to fix all this...which he clearly seems to be on track to be doing?

Citigroup Has Reached a Deal to Repay U.S. Bailout Funds

Seniors will not get Colas because that is the rule, when there is no inflation, the SS payment from last year will buy the same amount as this year.

Claiming "any stock is worthless" is hyperbole. The average yield on the S&P is about 2%. And the market cap of US stocks is over ten trillion dollars.

Ninety percent of Americans have jobs, the economy growing and job cuts stalled. Were you complaining about the drop in jobs, the loss of stock values, the meager COLA increases under Bush? Doubtful.

Where is it that seniors can move to get a cost of living increase in their soc. security checks and a little return in interest on the savings they worked all their lives to save for their old age? Their stocks probably won't return until their heirs inherit them.
Where can people move to get the social services their states are having to stop?
What will the job count be after all those hired for the holidays are once again unemployed?
When a new doctor takes over a bungled job on a patient we don't say "Well the other surgeon really messed up. Give the new doctor a chance to get it right this time.? Bo time for that or the patient will die.

How long did it take FDR to save the country?

While I agree with your assessment of the Republican record regarding the economy Andy, I wouldn't be so sure that the voters are going to remember who stopped the slide come November. There are too many things Obama could have led the Democrats to do - and did not - that people aren't just going to remember. They are going to still feel them just as strongly then as they do now.

Their banks will be legally ripping them off on their checking and savings accounts, and don't even bring up the nasty surprises already sprung upon their credit cards! Those seeking to avoid foreclosure are still having to fight it off daily, yet their bank could still decide with no accountability that there is no other option. The health care fiasco needs no specific elucidation, for its abuses are already well-known. I could go on, but I'm sure by now my point is made.

Add into this list of grievances the fact that more people now identify with the Tea Baggers than do with either the Democrats or the Republicans, or even independents, and there is a strong recipe for Democratic disaster brewing. I've been reading lately about the number of senior Congressional Democrats deciding to retire rather than run for re-election. Think they can't see this collapse of voter support about to happen? Why else would they retire now if not to go out on top?

Obama had better pull a large economic recovery out of his Nobel top hat and quickly, or else the electorate will replace the disappointing Democrats with anyone else available - even Tea Baggers. They have no more patience, not after watching the banks swallow billions and act like they are the aggrieved party when Obama hints at limp reform legislation. Nor are the voters willing to swallow anymore the tales of economic pie-in-the-Democratic-sky. They all appear to be adhering to the Missouri motto - they want Obama to show them the improvements, not tell them about what they cannot themselves see.

If things are not noticeably better by about Memorial Day, Obama might as well get used to dealing with a Congress containing a Republican majority. He will have earned it.

Not familiar with the Ostroy report, and I realize this is a partisan site, sorry but the economy is mildly recovering DESPITE democrat policies. Taxation, spending, and wealth transfers are non-productive and destroy capital, not create it. You are blind to the facts if you think otherwise so we'll agree to disagree.

Anon 1:20: Have you no idea how convoluted your supposition/logic is? "Democrats are in power...Democratic policies are ruining the country...the economy is improving...but it has nothing to do with Democratic policies." I suppose you also believe that the U.S. not finding WMD in Iraq proves they existed because they obviously were moved/destroyed before we got there. Jeez, gotta love the Republican mind....