Is Obama About to Make a Huge Mistake Over Afghanistan Troop Surge? 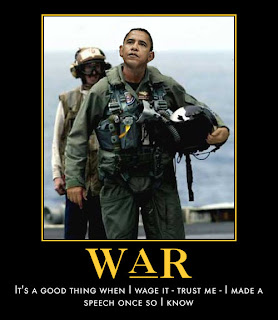 President Obama announced this week that he'll be unveiling his war strategy for Afghanistan next Tuesday and in particular his decision on the September request made by Gen. Stanley McChrystal for an additional 40,000 troops. White House sources report that Obama will authorize just 30,000 which, if true, may be a huge political miscalculation.

Any additional troop authorization under the requested 40,000 is going to create a feeding-frenzy of Republicans rhetoric accusing the president of failing to listen to the generals; for being weak militarily; and for placating liberals. At a time when Obama's popularity is waning and he's facing uphill battles domestically on health care and the economy, the last thing he and Democrats need is to have the GOP attacking the administration on the war. So the obvious question is, if Obama's gonna up the ante to 30,000 troops, why not just give the general the 40,000 he asked for, albeit it with stringent progress demands, measurable benchmarks and realistic timetables for "mission accomplished" and a successful exit? In this explosively charged political climate, why feed right into the duplicitous hands of the "Obama doesn't support the troops" crowd?

Also, sending additionally troops--any additional amount--poses a huge political risk for the president among his supporters as well. A Nobel Peace Prize-winning Obama sounding the anti-war alarm while escalating the operation sends a very mixed, confusing message to those who voted for him and expected a troop draw-down rather than a build-up.

To be sure, the 'correct amount' of additional troops needed for the Afghanistan "surge" is an absolutely arbitrary number, with Obama, Vice President Joe Biden, House Speaker Nancy Pelosi, Gen. McChrystal and countless others in disagreement over how many should be sent to complete the mission, whatever that is. So, why not defer to the leading commander in the region and give him what he sees in his McChrystal-ball rather than over-analyze the situation (as Obama's perhaps done for the past two months...only to come up with essentially the same conclusion), picking another number out of thin air which may or may not be the right one, and which allows your enemies to bash the crap out of you? Wouldn't it be more pragmatic and politically expedient to give the general the benefit of the doubt and shut down the engine of the right-wing attack-machine in the process? It just seems like Obama's regrettably setting the propaganda table for his ravenous GOP dinner guests.

Now on the other hand, instead of trying to play the "let's try to make everybody happy and ultimately make no one happy" game again, Obama could do what many believe he truly wants to, and what voters elected him to do: end the war, period. But this would mean acting on his true convictions. Now that would be novel, wouldn't it?
Posted by The Ostroy Report at 7:17 AM

With the announcement that at least 30,000 more troops are headed to Afghanistan at an annual cost of $1 million each, it has become clear to me that Obama is not the man in charge of policy. He is just another puppet reading his lines and taking the heat for those who are truly in command. He's merely the commander-in-fief.

When Obama became president, he had the opportunity to be in charge, but chose instead to dump every responsibility into someone else'e hands while he played at being president like his predecessor did. Whether these chosen hands deserved to be given such power has since been repeatedly proven to have been poor decisions. And if he really needed a mentor or guide to help him find his way around Washington's arcane intricacies, he should have selected one who didn't have a record of deception and subterfuge. As a direct result of Obama's poor and indecisive misfeasance, he has mired the nation deeper into the Big Muddy than did Lyndon Johnson. At least when Johnson did it, the nation wasn't bankrupt like it now is.

I now wish we had a national recall to remove Obama from power. I also wish there were someone trustworthy to replace him. There is not.

I now have absolutely no idea of what it is Obama intends to accomplish in his Presidency.

Being over 60 means I have seen this song and dance before. If the people of Afghanistan aren't willing to stand up for their own country then why should Americans die to support some con man like Karzai?

President Obama needs to stand tall on this and give the general no additional troops and pull this country out of Afghanistan quickly. This is a Vietnam in the making. The issue is not appeasing the GOP. Those jerks got us into this mess. I voted for Obama. But he is proving to be everything I voted against.

when did obama run on pulling troups out of afghanistan?

as i recall, he stated on frequent occasions that the conflict was in afghanistan and that he would end the iraq occupation and focus all our energies on afghanistan

bush fucked everything up

We were warned. During the campaign, on its front page The New York Times wrote a long, comprehensive article about Obama and his "governing" style when he was head of the Harvard Law Review. What he did then and there he is doing now That's who he is. Why didn't voters heed all the clues that were presented before we elected him>