The Sad Tale of Greg the Republican 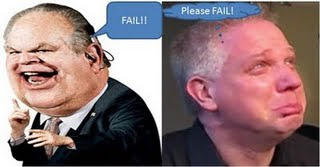 I have this friend. We'll call him Greg. Greg's an insufferable Republican. One of those Republican stooges who drives you nuts. The kind that seems brainwashed, defying logic and blindly defending the GOP and anything Republican as if they're on the payroll. Even if it goes against their own self-interest. I believe it's mild insanity.

Greg's not stupid. He's actually rather intelligent. Has a graduate degree. He's not the stereotypical resident of Dumbfuckistan. In fact, he's from Southern California. Lives in a ritzy gated community. An exclusive yet culturally diverse enclave that is home to all ranges of white people: rich white people, really rich white people, and super-rich white people. He owns a technology company. One that in fact does business with the U.S. government. But when it comes to politics, Greg seems as mindless as a Pied Piper rat. I often wonder what drives an otherwise savvy guy to the point where his ability to reason is paralyzed by the political filters through which information passes...distorting reality beyond recognition. What makes him and others so unconditionally loyal to the Republican Party, where they can no longer think straight?

To be sure, these folks are so consumed by partisan vitriol that, for the opportunity to bash President Obama and Democrats, and with an insatiable desire for power, they literally root for the economy to fail. They want the government to suffer. And they're willing to to get their own asses kicked financially just so they can say "I told ya so" about Obama and perhaps win an election next year. It's baffling. It's shameful. And, quite frankly, unpatriotic.

Greg and people like him truly appear to be upset at any sign of a recovering economy. It's as if their brains have chips that translate language into partisan drivel. You say "Wow, did you see that awesome 3.5% GDP number?" They hear, "Obama's successful." You say, "Retail sales are strong, and consumers are spending again," and they hear, "Obama's economic policies are working." They wince at good news. Therefore, you cannot engage them in intelligent, rational discourse. They are consumed with the "Republicans good, Democrats bad" mantra. It's all they can hear. And it's what drives them. So their typical response is to try proving that things are really terrible and getting worse. No matter how uninformed and foolish it makes them appear.

Greg keeps sending me articles. Has been for a year now. It's like he's possessed. On a mission. Nothing but pessimistic, negative, bearish, politically-rooted propaganda about the economy and the stock markets. The funny thing is though, Greg is in complete, utter denial. He and his naysayers have been dead wrong all along. The Dow has surged from 6500 to 10,000, and with it the economy has come out of recession, showing solid, consistent gains in the financial, banking, automobile, retail and housing markets. We've witnessed appreciable growth in the GDP; a steep drop in job losses; declining inventories; increases in manufacturing and productivity; increased borrowing; a rise in consumer spending; strong corporate earnings; and other very positive economic indicators. But none of this matters to Greg & Company. Their hatred of liberals, and their intense hunger to see Obama fail, keeps them oblivious to reality. In the face of clear, obvious economic recovery, these Chicken Littles keep yelling "The sky is falling, the sky is falling." And worse, if need be to bring Obama down, they'd be willing to lose more jobs, more home value, more investment dollars and more corporate sales. Their party first, country second mentality is unconscionable. They want America to fail.

Fortunately for Greg and his pals though, they get to play Chicken Little while Obama's cleaning up the economic shitstorm their president left him. If only they were able to show a little appreciation.
Posted by The Ostroy Report at 8:15 AM

That Republican Renaissance you mock is sadly becoming well established.

That "steep drop in unemployment" you tout somehow got reversed overnight. Instead of things improving for Main Street, as the other economic indicators you cite should have produced, unemployment shot up .4% in October and approached a number that I saw just last week, one which predicted that unemployment would peak at 10.5% by next March.

The increases in the economic indicators which has caused the markets to rise stems from increased productivity from the workers, who are increasingly worried that they will be the next ones to become unemployed - unless they sacrifice what remains of their rights and human dignity to amply provide for the greedy. Increases in productivity always means that employers don't need to hire more workers. So as their petrified workers cower in their cubicles and work ever harder, faster, and longer, employers see increased profits which are to rewarded only to those whose "labor" brought about this productivity increase through employee abuse.

The Democrats are doing nothing to alleviate this oppression. There is no third choice that is deemed viable for the people to turn to. Thus, there is nothing for the working class to do but vote against their own economic interests so as to get rid of those who claimed to be their champions. The record of the Democrats is to roll over and ask for another penetration each time the GOP balks at playing their intended "bipartisan" role. Why would those in need want to turn to a loser for relief? They would prefer to open the field to another group which might actually save the peasants from the lords of the manor.

The Republicans are ready, willing, and very able to exploit these failures of the Democrats to ease these plights. As a result, the Big Lie will again prove to be a viable political strategy, and people like your successful friend will impress those who make do without much that the Democrats can't and won't help them. Selling out to the GOP and their vile venality will be seen as the only way one can rise from the muck that these mental midgets imposed on us.

It really bothers me too.

From where I sit it surely looks as if the "sky is falling." For sure, there is no "chicken in every pot."

Anon 10:01...no one is saying the economy is humming and that good times are here. But just like in any bad situation, several things can happen: they get worse, they seems stuck, or they show signs of improvement. And I think we definitely are seeing many, many signs of improvement in the economy. That's not fact, not opinion. The economic indicators are what they are. People can spin them however they wish, but that ends up being spin, not fact. Now it sounds like maybe your personal situation is very challenging, and for that I am sorry and wish you the best. To be sure, many people are out of work and struggling, and I'll be the last one to deny or minimize that. But before we can have robust growth and prosperity again we have to start seeing signs of recovery. And that's what we're seeing now. Improvement. That's all I'm saying.

Improvement is what I see as well.
I can't see how anyone with a minimum amount of education could blame the present administration for the mess it inherited and for the length of time required to overcome it.

It is pathetic to see "experts" go on TV and trash all the efforts undertaken by comparing the US to any country they see fit for their purposes during any historical period that matches their point of view.

As for the vicious emails sent from either camp are simply indicative of the character of the sender.

credulity ignorance and narcissism....a dumbing down that comes from profiteering and protecting those profits. Your friend Greg may not be as smart as you think he is. Money is not a measure of intelligence.......and as you know people of his ilk are perfectly capable of sending a society over the brink and not having any clue as to why.