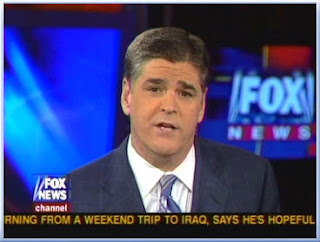 That's right, fuck you Sean Hannity. Someone had to say it. You are anything but the "great American" you and your brainwashed listeners delusionally call each other every five minutes. In fact, to the contrary, you're about as unpatriotic as they come. You root for America to fail. Just so you can keep spewing your partisan venom at President Obama and Democrats. Shame on you.

I say this not as a Democrat who's upset with you, because I'm not. Truth is, I and most other Democrats couldn't care less what you have to say. We find you ignorant and insignificant and can't believe anyone actually chooses to listen to you on the merits. But what's most shameful about you is how you blatantly lie and deceive your own audience. People who put their trust and faith in you. And you pay them back by feeding them bullshit at every possible turn. If only they know just how full of crap you are. But their ignorance of the facts is exactly what you prey on. As ill-informed as you are on the issues, they make you appear smart. And that's not easy.

Hannity on Friday was predicting that House Speaker Nancy Pelosi lacked the votes needed to pass the health-care reform bill, or "Pelosi-Care" as he calls it. That the measure had hit a wall and that Democrats were abandoning ship. He smugly mocked Pelosi, complete with devilish Dick Dastardly cackle, because she had been predicting the bill's passage. Oh, how just a few hours can make someone look completely out of touch. As usual, wrong again Sean.

Hannity, like most disingenuous right-wing talking-heads, has been wetting himself over what he claims to be a "horrible week for Democrats." Give these guys a couple of gubernatorial victories and they predict the Rise and Fall of the Obama Empire. Truth is, on a national level, Democrats have won every single House and Senate special election over the past year, including two last Tuesday. Every one. If there's any referendum going on here it's on the Republican Party and its incumbents, not Obama. Voters are resoundingly rejecting conservatives from New York to California. Hannity and his fellow liars can yap all they want about the significance of Chris Christie and Bob McDonnell's gubernatorial victories in New Jersey and Virginia respectively, but these two statewide contests prove nothing on the national scale. They were fought and won primarily on local issues. Given all the victories the left's piled up in the House and Senate under Obama, I'd be worried if I were Michael Steele and his GOP. And as for last week? With the two House wins and the health-care bill's passage, I'd say it was a pretty good one for Democrats. Nice try, Sean.

Hannity also incessantly lies to his listeners about the economy. He simply cannot admit there's been significant improvement. He rails on that this is now "Obama's economy," yet deceptively shields his audience from he truth about how the president and his economic team have pulled the nation back from the brink of financial Armageddon this time last year. You won't hear him talk of GDP growth, huge declines in job losses or recovery in the banking, housing, retail and auto industries. You won't hear him discuss the Dow's rise from 6500 to 10,000. Don't hold your breath waiting for anything truthful such as, "While we still have a long way to go, we sure have come a long way and are seeing many signs of improvement." Of course not. That would make him honest and objective.

Sorry Sean, but this is definitely not Obama's economy. Obama's trying, and very deftly I might add, to fix the shitstorm Bush dumped in his lap. In office just 10 months, the worst economy since The Great Depression is no more Obama's than the 9-11 attacks were Bush's fault.

If Hannity truly wants to be a "great American," he can start by being truthful to his listeners and stop rooting for his supposedly beloved America to fail.


On another note, the film I produced, SERIOUS MOONLIGHT, which was written by my late wife Adrienne Shelly (WAITRESS), will have its U.S. premiere and afterparty December 3rd in NYC. This event will also serve as the 2009 Adrienne Shelly Foundation fundraising gala, and proceeds will go towards helping ASF achieve its mission of supporting women filmmakers. Tickets are $150. Please join me, our stars Meg Ryan and Timothy Hutton, our director Cheryl Hines and others at this red-carpet event. Tickets are extremely limited (only 30 left!). To purchase, please call Jessica at 212-381-1716.

ASF is a 501 c 3 tax-exempt, non-profit organization which provides scholarships, grants, finishing funds, screenwriting fellowships and living stipends at NYU's Tisch School of the Arts/Kanbar Institute of Film; Columbia University; American Film Institute; Women in Film; IFP; the Nantucket Film Festival; the Tribeca Film Institute; and the Sundance Institute. Your generous contribution will go a long way towards helping us achieve this very important mission. Please click here to make a donation. Thank you.
Posted by The Ostroy Report at 8:47 AM

So true Andy, but way too many folks still believe all the repub hate, fear and lies.

It's going to be very tough getting the Senate to pass a health care reform bill that comes close to the House version. Don't forget we have to deal with traitor Joe who is claiming he will do all he can to stop it.

This guy is a real asshole, but you've got to believe he has something going when he can sell books to people who can't even read!

Hannity is the lowest form of putz on Earth - short of O'Reilly, Beck, and Limbaugh being worse.

That being said, Obama cannot dodge any responsibility for the current state of the economy. Now that the decline is declared at an end, it's become his responsibility to nurse the economy into recovery. He's not doing that very well.

I will accept that just maybe the massive donation of trillions of taxpayer dollars may well have kept the economy from collapsing, but so would have paying the banks for all those toxic mortgages they swindled the American public with. All these properties could have been refinanced at current market value, and sold to investors to get them off the government's books. Had he done so, Obama would have benefited two sectors of the economy instead of merely saving one at the sacrifice another.

There is no way that the citizens of Main Street are ignorant of this situation. They know that their economic throats were cut to attempt to slake the massive greed thirst of Wall Street. They know who to blame. It wasn't Gov. Corzine, nor was it Mr. Deeds. They lost on their own.

No, the voters know that Obama doesn't represent them, and they have had the betrayal of the Congress as represented by the abomination of health care "reform" jammed into their faces for months. Provided their own personal fortunes don't improve, and soon, they already know who they aren't going to vote for come next November. Their votes are not automatically going to go the the GOP, but it's becoming less likely that they will belong to the Democrats.

The responsibility for that will clearly belong to the Obama administration - and the GOP will take full advantage of this just like they took advantage of everything else "Bipartisan" Barack freely gave them.