Was This Magazine Cover of Obama "Sexist?" 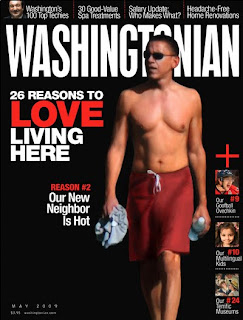 I just did a radio interview where I was asked about the Newsweek cover shot of Sarah Palin in tight running shorts, and if I thought it was sexist. Clearly, the magazine cover has been capturing the attention (and I suspect the fantasies) of many. America, meet your newest pin-up, Sarah Barracuda.

To the Republicans who've been critical of Palin's mistreatment by the big bad liberal media, I say, stop your whining. Nothing's more unflattering than a thin-skinned conservative. The Newsweek shot is no more "sexist" than the May Washingtonian cover of a bare chested beefcake President Obama, who the publication called its "hot new neighbor." Nor was the "President Cool" Ebony cover, or the New York Obama-terrorist satire cartoon-cover, racist.

Let's face it, the cover is a fair representation of Palin: an empty suit with a hot bod and a pretty face. She didn't get where she is today (wherever that is) by being a highly experienced, overachieving policy wonk numbingly versed on world affairs, economics and the environment. Former Republican presidential candidate John McCain thrust her 16 months ago into the national spotlight knowing she'd become America's favorite MILF, arousing (pun intended) his base and perhaps a few dirty old independents. He could've chosen a lot of other infinitely more qualified women like Liddy Dole, Christy Todd Whitman or Kay Bailey Hutchinson, but neither of them have the sleek gams or bodacious ta-ta's of The Wasilla Wonder. And she's been milking it ever since, trading on her womanly charms for maximum profit and exposure (pun intended). As I reminded the radio reporter, it isn't Hillary Clinton or Olympia Snowe in that Newsweek shot; there couldn't have been a "sexist" cover without a complicit Palin. Playing the victim card now seems terribly disingenuous.

A couple of other Palin thoughts while I'm at it: watching the Katie Couric "what do you read" clip on Oprah this week was more humiliating and embarrassing the second time around. And, Palin's explanation for why she didn't answer the question is even worse. She said she was "annoyed," and thought Couric was suggesting that Alaska was a "foreign country," isolated from the rest of the world. "It was unprofessional of me to wear my annoyance on my sleeve like that," she admitted. So, either one of two scenarios exist: either Palin is utterly misinformed and lacking in intellectual curiosity in not reading books and magazines, or, she's a catty hothead who blows her cool on national TV. Neither individual is someone we'd want just a heartbeat from the Oval Office.

Lastly, in her interview with Barbara Walters this week, Palin was asked to rank President Obama's performance to-date from 1-10. "Four," uttered the unsurprisingly derisive Palin. Well, if Obama's a four, she's a negative four-trillion. You betchya.
Posted by The Ostroy Report at 8:28 PM

last 2 blogs on Palin.
Get over it.

No it isn't sexist.

I get Newsweek and hated Palin on the cover, but it isn't sexist. She has put herself out there and will have to live with our 24/7 news world. I have a feeling she loves the attention.
Please GOP nominate her for president. It would ensure that Obama gets a second term.

The only down side is that the Huckabee is going to solidify the far right.

all Palin all the time?

Couple of items.
One,how come you cant stop talking about Sarah Palin?People like you are the reason she's always in the news.
Also,while watching several shows last night it came to my attention that the photo Newseek used of Palin was taken months ago for Runner magazine and she didnt know they wanted to use it.
Instead of talking far left points off the top of your head,perhaps you'd be better served doing research on a topic before either lying or manipulating the facts,which is your greatest strength.

yada yada yada
palin palin palin
And you speak of her in a sexist manner.

Sorry to burst your little Pro-Palin bubbles, kids, but is uetterly irrelevant which magazine that picture was origianlly shot for. Do you think Newswekk, Time etc only put photos omn their covers of people who actually sat for photo opps for them? Do you think Obama paraded around a photo studio for this WASHINGTONIAN cover shot? Do you think Bill Clinton, George Bush, Hillary Clinton, Dick Cheney, Condoleeza Rice etc are only on magazine covers when they've done specific shoots for them? In fact, I am willing to say that rpobably 99.9% of ALL news magazine covers use photos from other sources. Therefore, Palin is as open season as anyone else.