The Big Surprise Moment During the Oprah/Palin Interview 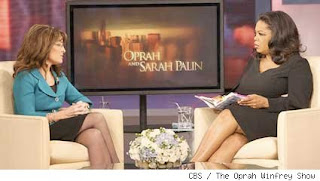 For weeks now we've been teased with promotions for the much-anticipated interview between talk-show queen Oprah Winfrey and America's most infamous political train-wreck, Sarah Palin, which finally aired Monday. Everyone wondered how the chat would go. Would Palin spill some dirt on McCain? Bash almost-son-in-law Levi Johnston? Announce that she's running for president in 2012? But the real telling moment came in the first seconds of the sit-down, as Oprah, perhaps feeling threatened and insecure by a woman who for some strange reason seems to captivate audiences more than her, attempted to make the hype all about her. They don't call it The Oprah Winfrey Show for nothing. It was a moment worthy of a WWF Smackdown: The Narcissist vs The Maverick.

Did you feel snubbed that I hadn't invited you to be on the show during the campaign?, Winfrey immediately asked The Wasilla Wonder. To which a rather snarky Palin quipped, "No offense to you, but it wasn't the center of my universe." Oh no she di-'int! Palin then added, "I've heard more about that during the last few weeks than during the campaign." Clearly taken aback, an incredulous Winfrey asked, "You didn't even know about it?!" Wow. It was kind of painful to watch. It was as if Oprah was pleading, Wait, don't you know who I am? I am Oprah...Winfrey....I elect presidents...I turn no-name authors into superstars....I make middle-aged, middle-American white women swoon more than Josh Groban! Are you telling me you didn't obsess about me when you were on the campaign trail? Shocking! Truly shocking!

But just when I thought it was all over, another AHA! moment occurred when the Id-bruised Winfrey wondered if she should take heed of all the chatter about Palin getting her own television program:

"Oprah, you're the queen of talk shows. There's nothing to ever worry about," . Nicely done, Sarah. Perhaps you're a little smarter than we think...
Posted by The Ostroy Report at 7:16 AM

I like Oprah. I didn't know folks hated her.

Great piece. Just one quibble, I think you mean ego-bruised, not id-bruised. If Oprah was all Id it would be a whole other show!

Andy you have no idea what you are talking about. You are a leftist blogger that is attacking Oprah because she did her job and interviewed Palin.

Oprah did not make anything about her she handled herself well and cleared the air that contrary to mass media reports Palin was not snubbed.

You just need something negative to say or you cannot be happy.

Way to cut through the BS of this non-event. Oprah invites Palin on her show to promote Sarah's ghost written memoirs. This interview was all about ego and the sad state of feminism in America today. We'll know when we've finally turned the corner on sexism in the U.S. when a female candidate is nominated for president/vp and nobody comments on her looks, style, or devotion to family. In the case of an unqualified Palin, there was little else to discuss.

Palin's new talk show should fill the gap between Oprah and Jerry Springer quite nicely.