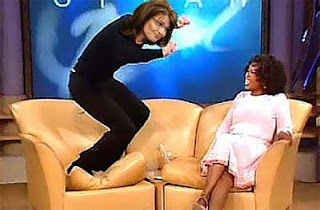 Am I the only one who finds the timing suspect? That just days after Oprah Winfrey, Queen of Daytime Television, interviewed former Alaska Governor and Republican vice presidential candidate Sarah Palin, the media titan announced she's quitting her top-rated talk show in 2011? Seems like voters are not the only ones terrified of The Wasilla Wonder's next move.

Ok, so the notion of Oprah's departure being directly tied to a fear of Sarah Palin is a little far fetched. But, Oprah's ratings, and her confidence, have been continuously slipping, and let's face it, Palin's some kind of force to be reckoned with, no? As I wrote last week, I think Oprah's genuinely disturbed by the fact that audiences seem to respond to Palin more than her. And what about the moment during the interview when Oprah joked about Palin as future competition: "Oprah, you're the queen of talk shows. There's nothing to ever worry about," . But perhaps worry she did, as it's quite possible The Big O, just days later, decided: "Oh screw it, I'm Oprah Winfrey, and I ain't gonna knock heads with this bimbo in a year or two. I'm outta here!"

Now this is all supposition, and maybe Oprah's simply throwing in the towel all on her own. After all, she's had a phenomenal 23-year run. But she's also very smart and prescient, and I suspect knows what the rest of us highly perplexed observers already know: never, ever underestimate the inexplicable popularity of Sarah Barracuda.
Posted by The Ostroy Report at 7:28 AM

No I don't. It has been rumored that Oprah was going to leave way before Palin was due to come on.

As I suspected, my humor is apparently getting lost here. So for the record, I do not think Oprah's quitting because of Palin. My piece is satire, people. Satire. Tongue-in-cheek humor....

Have you noticed how much the Dow has risen since Sarah Palin, in a bold act of self-sacrifice, left her job as governor?

Sorry about that. I do hope Palin runs and wins the nomination. I look forward to an Obama second term.