A "Republican Renaissance?" Yeah, and I Hear the Mullet's Coming Back Too" 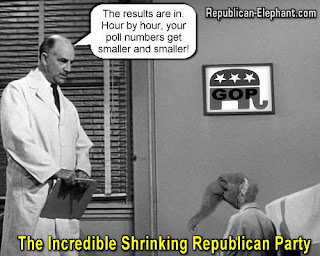 There's colossal joy in Mudville this week as Republicans predict sweeping success in next year's mid-term elections in the wake of Chris Christie's and Bob McDonnell's gubernatorial wins in New Jersey and Virginia respectively, and in what they say is a clear repudiation of President Obama and Democrats' "liberal agenda." A newly energized GOP Chairman Michael Steele is calling it all a "Republican renaissance." Talk about premature ejaculation.

But the real picture is anything but rosy for the GOP. The truly bigger race, in Upstate New York, handed them a humiliating defeat in the solidly red 23rd Congressional District, where a Democrat hasn't won the House seat in over 100 years. This was a national election based on national issues, and therefore a clear affirmation, not a repudiation, of Obama's performance...something which Steele, Rush Limbaugh, Sean Hannity and all the other propagandists are conveniently ignoring but are shaking in their Uggs over. Christie and McDonnell won on purely local issues. Their victories mean absolutely nothing on the national stage. The real takeaway from Tuesday is that voters still want change; the sort of change that does not bode well for the GOP.

But Democrats should not be complacent or assume the tide is with them. An early warning to the left: be very, very leery of your counterparts across the aisle. They are angry, resentful and desperately want to be back in power. They will do and say anything to achieve that end. And they're pretty good at it. Great at propaganda. Skilled in truth-stretching. Will even lie through their venomous teeth to get what they want. And now they're reinvigorated. Their victories this week have left them with a euphoric, and inflated, sense of self and entitlement. The Republican orgasmatron is in high-gear, with promises of the proverbial happy-ending. The talking-heads are now bragging that most of the country is conservative, anti-big-government, anti-abortion, faith-based, pro-war, tea-baggin' Obama-haters who will kick Democrats to the curb next year. To the contrary though, as Democrat Bill Owens' victory in NY's 23rd indicates, voters continue to be trading in their Republican clunkers for the newer Democratic model.

ASF is a 501 c 3 tax-exempt, non-profit organization which provides scholarships, grants, finishing funds, screenwriting fellowships and living stipends at NYU's Tisch School of the Arts/Kanbar Institute of Film; Columbia University; American Film Institute; Women in Film; IFP; the Nantucket Film Festival; the Tribeca Film Institute; and the Sundance Institute. Your generous contribution will go a long way towards helping us achieve this very important mission. Please click here to make a donation. Thank you.
Posted by The Ostroy Report at 7:11 AM

If the Dems don't show that they can get things done, then the progressives will sit out the 2010 election and yes, the Repubs will make a come back.

This is more about us than anything else. I sure hope the Congress and White House got the message from VA and NJ.

I think people should consider if they want a society where "Death Panels" "Glenn Beck's red phone" (to which he doesn't give the number,) Birthers, and a multitude of unsigned, unattributed large-font, emails drive people's emotions.

Because the loss of independent voters means it's working.

Your assessment of the current state of the Democratic Party reputation with the voters shows that you have seen a few things that you once didn't - and that you now recognize them as being valid. But responsibility for improving this reputation can't be lamely laid at the Party's feet like the health care reform bill was dumped before the Democratic Congressional delegation.

Someone has to be calling the shots, forming the strategy, and managing the tactics as the next electoral campaign begins in just a couple of months. Traditionally, in both major parties, that role has belonged to the president if the party is in power, and to the national party chairman if the party is not. Michael Steele - despite his inane assertions and clownish delivery - is doing his job. When does Obama begin his? Enquiring liberal and progressive voters want to know!

Realist: The reason that the White House gave health care reform to Congress to deal with is because of what happened when the Clinton White House tried to get it done.
Congress (Repubs) fought hard against the White House telling them what to do back then. Maybe Obama waited too long for direct imput, but he always gave them general guidelines as to what he wanted to see passed.

And because of how the Senate works, the Repub senators are using every tactic to slow walk health care reform. Watch what happens next. The House will pass their bill very soon, and the Repubs in the Senate will do all they can to not let anything pass this year. It is their right to do so, but it is so frustrating to watch.
The majority of Americans want it done, and yet we are held hostage by these Republicans who think somehow denying health care to millions of Americans is a good thing. The crazies we saw yesterday at the Tea Baggers' Rally, just proves how uninformed those folks really are. All we want to do is provide affordable health care for all Americans and they scream and yell that is is taking away thier freedom.
What are they talking about? We are the only country in the world where an illness can bankrupt you. I just don't get those folks and I never will.

How does the fact that Bill and Hillary Clinton failed to pass that incredibly complex abomination of a health care reform bill exonerate Barack Obama for failing to offer real leadership? Offering general guidelines is not leading! The only times he stepped out of the Oval Office to deal with the process was to stomp on the progressives for failing to be good little follower Nazis like his bipartisan Republican friends - oh, wait. He didn't HAVE any bipartisan Republican friends. Obama promised the moon and then ends up mooning us for wanting what he promised. Some leader!

As for watching what the Congress produces, the Democrats will cut their own throats today (11/7/9), excising what good things the House bills still contain lest the GOP bastards call them un-American and other nasty things. Look at what happened to Rep. Anthony Weiner just yesterday, forced by pressure from the Speaker (and maybe the White House) to withdraw his proposed single-payer amendment lest it derail a successful vote to pass the insurance company relief bill. If such a staunch supporter of the people's welfare can be slapped down so easily, what hope is there that anything good will come from this bill?

The longer this goes on, the more likely it is that the people will become the exclusive property of the insurance companies and get NOTHING in return for their sacrifice. And you want to call that leadership, 8:35am? Sorry, that dog won't hunt!