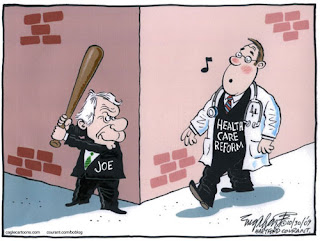 Sen. Joe Lieberman hails from the state of Connecticut, whose capital, Hartford, just so happens to be nicknamed the "Insurance Capital of the World. He's received more than $1-million insurance company campaign contributions since 1998, and during his 2006 re-election bid he ranked second in money received from this special-interest group. This is the same Sen. Lieberman whose flip-flopping on health-care reform this week just might cost the President and the Democrats the most important piece of domestic legislation in modern history. Coincidence?

After consistently supporting a provision to expand medicare benefits to millions of people between 55-64 (endorsing it as recently as three months ago), Lieberman has threatened to join with Republicans to filibuster the Democrats' bill at the last freakin' minute. Not only is the timing of his cock-block highly suspicious, but so is the motivation. Lieberman was elected by the people of Connecticut, not the mega-billion dollar insurance companies. But it's become abundantly clear with whom his allegiance resides. Furthermore, his 11th-hour bomb-drop is a big fat giant fuck you to all the progressives and bloggers who joined the "Beat Lieberman" brigade during the last election. Take that, Markos Moulitsas.

So what happens next? Senate Majority Leader Harry Reid (NV) can bow to this insurance industry stooge and water-down the bill or he can splinter off the public option feature from the non-budgetary components of the measure and preempt a filibuster under reconciliation, a parliamentary tactic whereby Reid could push through a government-run health insurance program with just 51 votes instead of 60. If Reid and the Democrats had any balls, this is what they'd do. For crap's sake, the party controls the White House and both houses of Congress, yet they're still pussyfooting around with self-aggrandizing thorns like Lieberman who threaten to derail its agenda.

Lastly, it's time for Democrats to punish Lieberman for his consistent disloyalty, from supporting Sen. John McCain's bid for the presidency in '08 to this latest self-serving ploy. A new poll shows that 81% of Democratic voters want Lieberman to be stripped of his chairmanship of the Senate Homeland Security and Governmental Affairs Committee. Sen. Reid, are you listening?


On another note, we could use your help at The The Adrienne Shelly Foundation. We're a 501 c 3 tax-exempt, non-profit organization dedicated in my late wife's honor, and with a simple mission: supporting women filmmakers. Adrienne, who wrote, directed and starred in the hit film WAITRESS, was killed November 1, 2006. Through the Foundation, her commitment to filmmaking lives on. We've established scholarships, grants, finishing funds, screenwriting fellowships and living stipends at NYU's Tisch School of the Arts/Kanbar Institute of Film; Columbia University; American Film Institute; Women in Film; IFP; the Nantucket Film Festival; the Tribeca Film Institute; and the Sundance Institute. Your generous contribution will go a long way towards helping us achieve this very important mission. Please click here to make a donation. Thank you.
Posted by The Ostroy Report at 9:37 PM

Last night we saw the final nail in the coffin of the Dems 2010 election. No Universal Care, no Public Option, No Medicare Buy-In

We worked so hard to get Obama and the Dems elected and all they do is betray us at every turn. The Dems have no idea at all the anger out here because they failed to get it done. Why is traitor Joe Lieberman allowed to run the country? The Dems must be living on another planet.

I'm a Liberal Democrat and a senior citizen that has been cast aside as dispensable to the Party and as a human. The Dems have no concern about Medicare, my future health care after they cut that program to the core, about my living as long as I can, and about my having no income other than Soc. Sec. for one year because of the low interest rates This is not paranoia because I heard the plight of seniors discussed on a PBS program and it was admitted that group has been sacrificed for the good or others and this wil continue to be so. Life before the late teens and after fifty-five is not worth so much as the in between years.

Maybe Lieberman is just acting as a resposible senior working on our behalf.

I blame the voters of Connecticut for this travesty. They chose to shun Ned Lamont and give their votes to the Senator from AIPAC.

I now read that Lieberman might be considering running for re-election as a Republican. If the voters of Connecticut once again send this self-serving insurance company lackey to Washington, one will have to question the mental competence and moral standing of that group.

No the Dems do have concern for Medicare. Read the bill. Do I like everything? No. Are there still good things in it? Yes. Do I think young voters will sit on their hands in 2010? You betcha. Will the Repubs make things better? Hell no!

But don't forget a huge number of Baby Boomers will soon be part of Medicare. The Repubs want to destroy it. The Repubs have never been for Medicare.